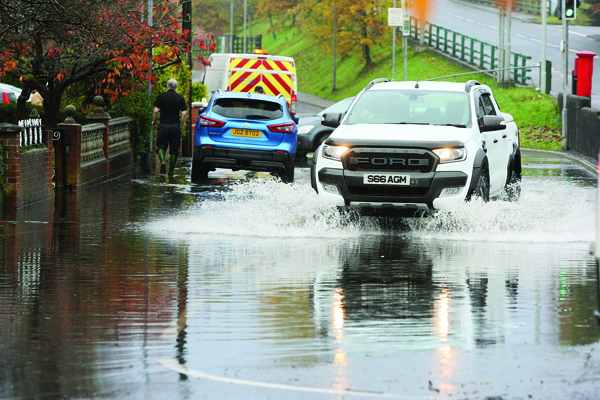 A YELLOW weather warning for rain remains in place for the rest of Wednesday after overnight flooding.
Flooding has been reported across Belfast with Orchardville Avenue and King’s Bridge at Stranmillis amongst the worst affected areas on Wednesday morning after heavy rain throughout the night.
It’s the second time this year Orchardville residents have awoken to high water at their doors.
One resident told Daily Belfast: “We seem to miss the worst of it but there are two or three houses in the middle of it and it comes right up to their doors.
“This is the second time this year and it’s clear something needs done before it happens a third time. This is Ireland and we expect the heavy rainfall, especially at the end of the year, and so I think its only fair that our drains or whatever the problem is are made to deal with these situations.”
Local Sinn Féin Councillor Geraldine McAteer was visiting residents affected in Orchardville on Wednesday morning, donning her welly boots and raincoat, like many of the trapped residents.
“I believe there is something structurally wrong here because this is happening consistently,” she said. “The problem is that these houses are constantly getting flooded but also you can see the depth of this today with more rain.
“People are using the likes of Finaghy Halt and it’s difficult for any of them to get in especially if they are on foot.
“I’ve also had constituents ring me who are taking their cars to work and had to go back and they’ve had real difficulties here this morning.”
The Met Office warning is in place until 7pm tonight. Police are urging motorists to slow down due to “difficult driving conditions”.
A PSNI spokesperson said: “Lots of surface water and spray. Please slow down and keep a safe distance from the vehicle in front of you.”
More strong winds and rain are expected later in the week with a further weather warning in place from 9am to 9pm on Friday.
Belfast City Council’s website advises residents to report serious flooding. Call the Flooding Incident Line on 0300 2000 100. This line is open 24 hours a day, seven days a week. You don't need to know the cause of the flooding. If your home or property has been damaged by flooding you should contact Belfast City Council on 028 9027 0428.