‘GAA Books for Kids’ launched to inspire the next generation 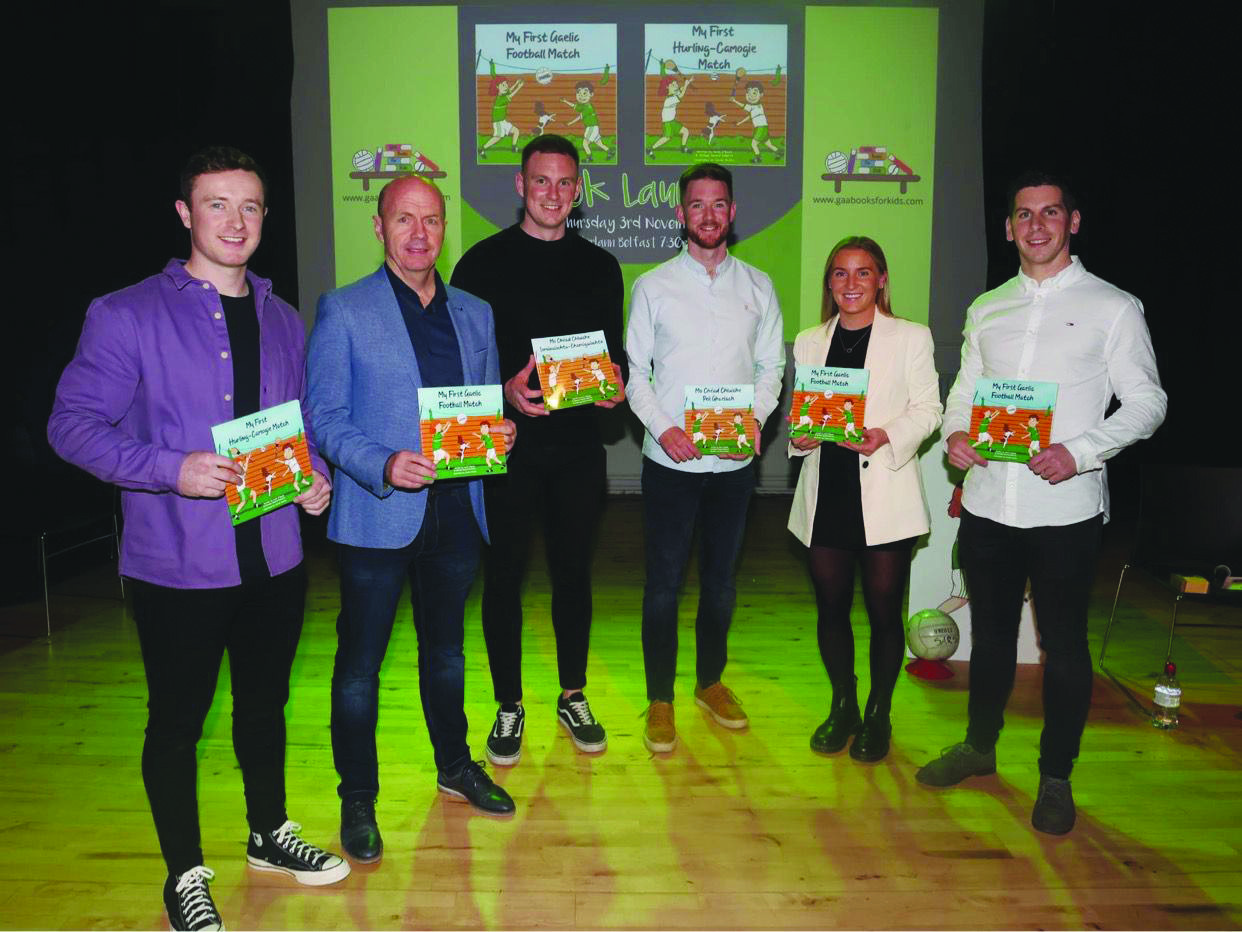 PLANTING the seeds of Gaelic Games in young people is a passion for coaches the length and breadth of Ireland, but the journey to a child’s first game can be quite different.

Some are born into traditional GAA families where hurling/camogie and football is commonplace, but for others, their introduction to the national sports can be through schools or indeed, peers.

Regardless of how they get there, the first steps are essential and keeping Gaelic Games in the minds of young people is equally important in terms of retention.

Some youngsters may switch off from sports from one training session to the next, perhaps their attention consumed with one of the countless other activities that are now readily available.

With that in mind, three men have come together to produce a children’s storybook, aimed at ages 4-7 called ‘My First Gaelic Football Match’ and a small ball version: ‘My First Hurling-Camogie Match’ - the aim to inspire young people and share their love of Gaelic Games through reading.

But the idea developed further to create a storybook for children, a vision shared by Cargin footballer and ex-Antrim captain Kevin O’Boyle - himself a teacher at Holy Trinity College, Cookstown.

Both Doherty and O’Boyle are parents to young children, so are privy to their first steps on their GAA journey and from an initial brainstorming meeting at The Dunadry Hotel 18 months ago, within hours they had a clear plan of what they wanted to do.

At the Cultúrlann a fortnight ago, the trio launched their book, hosted by Thomas Niblock and supported by special guests Austin Gleeson (Waterford), Niamh McLaughlin (Donegal) and Peter Canavan (Tyrone).

🗣“Bedtime stories are probably the only time now that parent & kid actually get a time to connect & there’s no other distractions!
For sure a story like this just reinforces the value of sport!”

We think so too @bernardjackman 👏👏👏

“Myself and Ciaran had been working away on the ‘Live, Love, Learn Gaelic Games’ booklets and then ‘Kobo’ (O’Boyle) got in contact, asking if we had thought of doing a storybook,” Doherty explained.

“I’d been concentrating on activity books to keep kids on task when they are away from their club.

“The main idea was to get families talking about the GAA. I looked at my own club, Sarsfield’s, and the amount of kids there who don’t come from a GAA background. Some would learn the rules of the games as they are up watching a match, so I thought in terms of player retention, the best thing is to have the parents on board so that’s where the booklets came about.

“So we met at The Dunadry, stayed there until about 2am and by the time we’d finished we had a story board jotted together and although we’ve all had different experiences in the GAA, we’ve all felt the benefits and want to encourage more kids to give it go, due to the benefits both emotionally and physically.”

The books - available in Irish or English - can be personalised for individual clubs with an order of at least 100 per club and highlighted the opportunity to link the books into the school curriculum, using a bespoke free 30-page activity booklet, designed in conjunction.

Its two main characters come from different backgrounds: Kayla Doherty - a young girl immersed in the GAA; the other a boy, Senan McCoy, who has no GAA background.

They come together with Kayla smashing a window and that sparks a conversation with Senan subsequently learning about the sports and also getting his first taste of the skills - the start of their  journey from strangers to team-mates.

But this story also involves the parents, the apprehension of their child joining a new club and the worries of whether he will feel welcome or indeed, safe.

“I wanted to have one character who doesn’t come from a GAA background so we can show how welcoming it is and showcase the benefits of being a club,” Doherty stressed.

“Some people may feel the GAA is almost a bit of a cult where you need to be born and bred into it or need to know the GAA like the back of your hand.

“Of course, it’s just not like that and you can see that over the past 10 years with the explosion of the nurseries at clubs and the number of kids involved with clubs at the minute.

“For us, it’s about opening doors and breaking down barriers, with the story in the book leading them to start their first ever Go Games at the same time despite their journey to that point being a little different.”

Although the book is aimed at children, each of the special guests at the launch shared their own thoughts and reflecting on childhood memories the stories brought them.

The book is designed to be read between a parent and child at story time - perhaps a vital part of the day given how many lives are now consumed with phones, tablets, games consoles and TV.

Having that time to sit and bond over a shared interest or what for some will be the first steps on a journey.

“We’ve found that the parents are enjoying the book as much as the kids,” Doherty confirmed.

“At the launch, Peter Canavan was telling us that he was reading to the grandchild and it was bringing back the memories of his first game and going to get his first jersey, so it was powerful to have that.

“For parents to share this journey with their kids and being able to reminisce of their times is amazing.

“Go back 10 or 20 years ago and families would have been around the table and had more time for conversation, but now things have changed.

“We met Bernard Jackman (former Irish rugby international) at a Stephen Poacher workshop and he took an interest in the storybook as his point was that story time now is probably the only time you get that time where a parent and child converse without other distractions like phones or TVs, so having this book that will bring back memories for the parent and engage the child will make it so wholesome.

“For a child to hear that emotion from a parent or grandparent can only inspire them and to think there are families all over Belfast and beyond sitting down and having Gaelic Games in their minds and part of their conversation is incredible as it builds the connection.”

The trio’s intention is of course not to simply preach to the converted, but plant those seeds in children for whom Gaelic Games couldn’t be further from their minds.
Demand for the book has exceeded all expectations and they intend to make it widely available - a perfect Christmas stocking filler for youngsters who may or may not already be involved with a club.

On December 22 and 23, they will have a pop-up stall in the Kennedy Centre but copies can be purchased online or through clubs.

Doherty, Orchin and O’Boyle passion for Gaelic Games inspired them to produce this book and their collective wish is that they can inspire more to get involved, regardless of their background.

“We’ve been blown away by the response as we’ve had orders from all over the country,” Doherty confirmed.

“Clubs are purchasing their personalised version and we’ve about 15 of those done now where the book would have your own club’s jersey illustrated. This has been described as a passion project and it absolutely is.”

You can purchase the book at www.gaabooksforkids.com