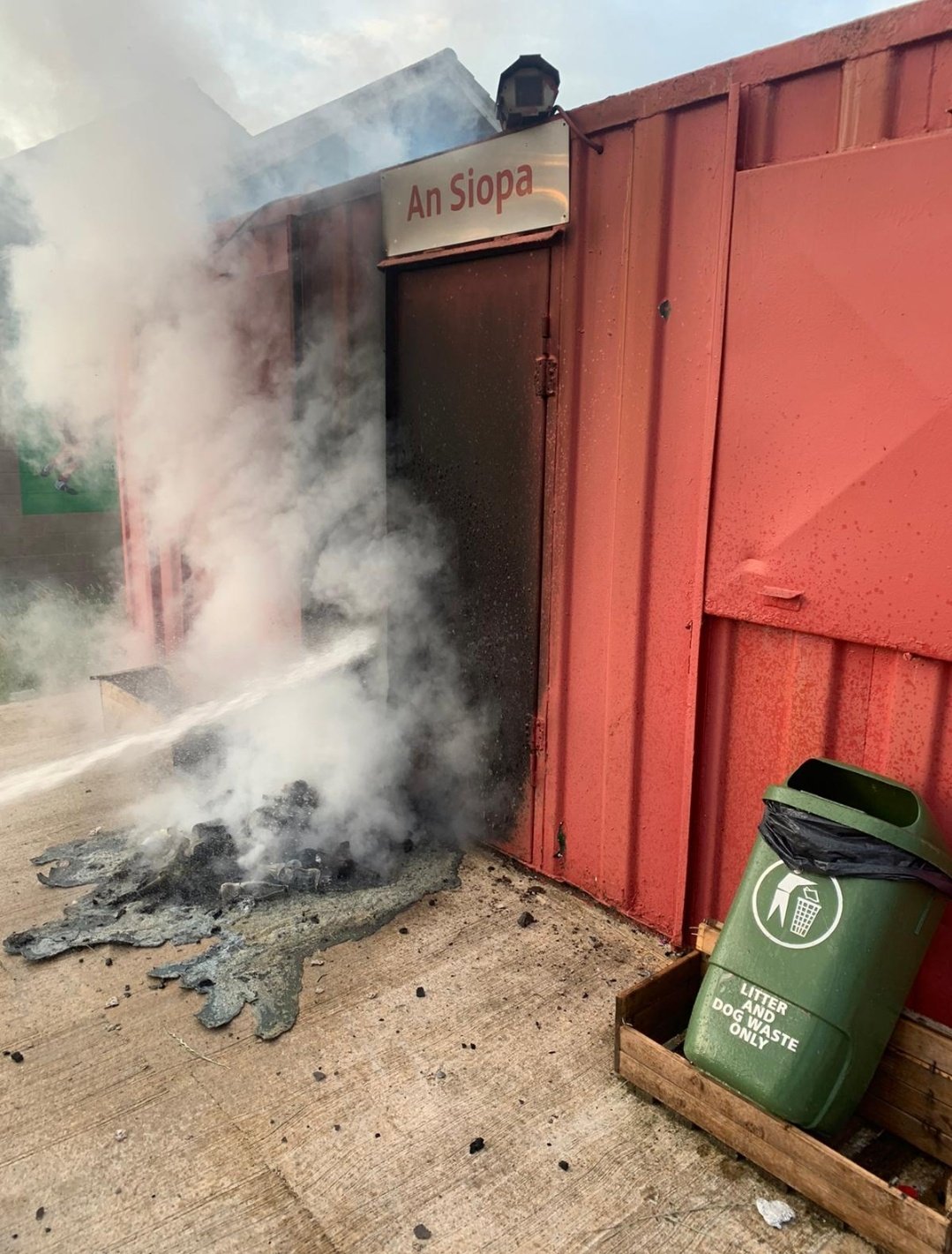 AN Antrim GAA club have vowed that they will not be deterred by a weekend arson attack on their premises.

Police are investigating after the clubhouse shop at Naomh Séamas CLG in Aldergrove was set alight on Sunday evening.

The Fire Brigade attended the scene after vandals pushed a bin against the door of the shop before setting it on fire.

The arson attack, which is not thought to be sectarian, caused extensive damage to the premises and destroyed thousands of pounds worth of club merchandise and stock.

Tonight our clubhouse shop was attacked by mindless thugs and hoods who set it alight. The damage was extensive both externally and internally with smoke damage ruining our club gear and all the stock in the shop.
https://t.co/Kb1A67uP4j pic.twitter.com/BkHzXFqCHx

Speaking to the Andersonstown News, Naomh Séamas Secretary Martin O’Toole said: “We have a lot of stock, because we had cleared the shop out in December and started restocking it for the new season.

“We actually had a lot of kit in it, but we’re just going to have to bin it or sell it as fire-damaged good. All the drinks in the fridges and so forth will just have to go now.

“Although the fire was outside, the fire brigade had to break into the unit, which is a sealed unit – it’s a metal container that we had purchased.

“There was quite a lot of smoke damage inside it and they had to wait until it cooled down until they lifted the stuff out, so it was an intense enough fire.”

He continued: “The shop is an income for us as well, which is a big thing for us.

“You can’t use your facilities for activities to raise funds, so the shop was really important for us. That will obviously be put on hold for a period.

“Every single GAA club is in the same boat; there is nobody sitting affluent with lots of money.

“We move from year to year, and we don’t make any profit, so any income we lose is a hit for the club. We’ll have to think about how we can make that up.

“The committee will meet some stage this week and decide what to do. We want to get it up and running as soon as possible.”

Mr O’Toole said the club had witnessed increasing levels of vandalism at its premises during the Covid-19 lockdown. However, as restrictions continue to be eased in the weeks ahead, Naomh Séamas are looking forward to getting back to what they do best.

“It’s a difficult time and kids have nothing else to do,” he said.

“Usually we would keep our pitch open and you would see crowds of kids on the pitch, and we encourage that within the community – it’s a real big plus for us.

“We’re opening again on the 29th of June and we’ll be back training. At least from a sporting perspective we’re looking forward to getting young people back out onto the pitch, maybe even divert some of that frustration and energy that they’ve got.”

He also praised the local community who have been “fantastic” in their support of the club during this difficult time.

“Every cloud has a silver lining and it has brought the community around us,” Mr O’Toole said.

“It will not deter us. We’ve had worse. We’ll just move on.”

Following the arson attack, PSNI Inspector Spence said: “A 17-year-old was spoken to by police and a file will be forwarded to the Public Prosecution Service in due course.