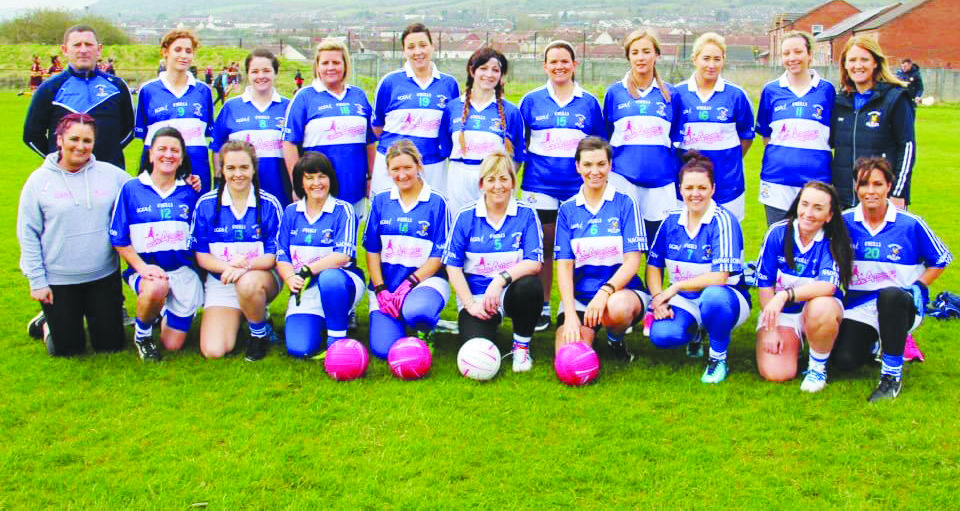 AT a time when the playing fields of Ireland have never been quieter, the longing for the return to action has never been greater.

Whether it's inter-county or club action, players across all codes and various grades are eagerly awaiting the green light to return and this is no less true for many of the 'GAA mammies' who are part of an ever-growing movement in itself.

In recent years, the Ladies Gaelic Football Association (LGFA) launched the Gaelic4Mothers&Others initiative - an innovative way to introduce mothers and other women to participate in ladies football.

It was always a case of mothers dropping their kids off and picking them up at training or matches, but there was scope for getting them involved on the field in games and tournaments in a fun, non-competitive and social environment to boost physical and mental health.

Since its inception, the initiative has exploded in popularity with women of all ages getting involved throughout the country with the number of clubs forming Gaelic4Mothers&Others teams increasing at a rapid rate.

Belfast clubs have not been found wanting and in St John's, their first foray into Gaelic4Mothers&Others began back in 2015 when a group mothers in the club decided they would form their own team.

From their initial gathering in autumn 2015 for a six-week trial run at St Dominic's sports hall, the seeds were sown and the Johnnies' girls haven't looked back since.

Martin Crummey and Andy Fennell were the men who initially ran their eye over the new group of aspiring footballers who took part in their first blitz tournament at Rossa in October 2016.

"There was a crowd of us getting together to do a bit of running - 'Couch to 5k' - when Nicola Neeson and Sharon Hughes initiated the whole Gaelic for Mothers at St John's," said Kelly Darragh, one of the original members and whose husband, Aidan now coaches the team.

"The whole thing was brilliant craic; none of us knew what we were doing, but it was just brilliant fun between everyone and it all just grew from there. We had a panel of 22 at that stage and it was just a crowd of women learning a new skill, getting a bit of exercise and having a bit of fun.

"Martin and Andy couldn't take us any more, so that's when my husband, Aidan took over and he started coaching us in April 2017.

"From then, we started going to a number of tournaments throughout the year at St Gall's, St Brigid's, Gort na Móna, Saval in Down and Carryduff. We've also been to the Ulsters and All-Irelands over the last few years.

"There's a slightly competitive edge at some of the tournaments, but it's not anything major. We don't keep score, there's no cups or medals and each tournament usually raises money for a good cause."

St John's hosted their first tournament in 2018 and had hoped to hold another this year, but the current health emergency means they will have to wait until they can invite teams back to Corrigan Park for their second Gaelic4Mothers&Others blitz.

Of course, there is rivalry between the clubs, but also a camaraderie that shines through with the action on the pitch followed by the players enjoying the social aspect after.

"It's always a good day for everyone," Kelly confirmed.

"After the tournament, there's always a bit of food and some would stay on for a drink afterwards, so it's a bit of a social event on top of everything."

For her husband and team coach, Aidan, coaching this group of players has been an enjoyable experience and has also helped boost the membership of the club as mothers who may not have been affiliated with St John's previously are now fully integrated members.

"It used to be the case that mothers would come up to the club, drop their kids off for training and then went away again," he explained.

"They were encouraged to join and before you knew it, they were coming to training, wearing blue and white shirts and all of a sudden they were St John's people.

"Loads you would know to see coming up every week to leave kids up, but they weren't involved in the club. Now they are and their friends are starting to come, so it's a whole community now.

"At the start when I was training them, it was all a bit of fun and they would come together and have a chat. Then, they started learning the skills and were getting better, so then they wanted to win the tournaments.

"As a team, they were getting so much enjoyment out of it but then there is the social aspect of it too where they can sit with likeminded people and have a chat. All the teams would mix too, so it's been great and I've had great fun training them."

Members of the St John's Gaelic4Mothers&Others team have indeed thrown their lot in with the club and help out with a number of aspects off the field from fundraising to stewarding.

This has helped seal the bond between the players and the club who all feel part of the wider Johnnies' community and that ownership has helped drive the club on as a whole.

"I think all of our girls are now members of the club and some have even gone into coaching," noted Kelly.

"I'd take the U8 girls with another of our players and then another two came in to take over this year. There are others who have started coaching the camogie so it helped bring new people into the club to help out with coaching or just become members - some have even ended up as committee members.

"That has led to volunteering and stewarding because there have been many more events in the club. We hosted a 'ladies night' to help fundraise for the 90th-anniversary dinner last year and we have a Halloween disco now too that we would help out with, along with the committee, so the main aspect of Gaelic4Mothers is the sense of community you get with it all."