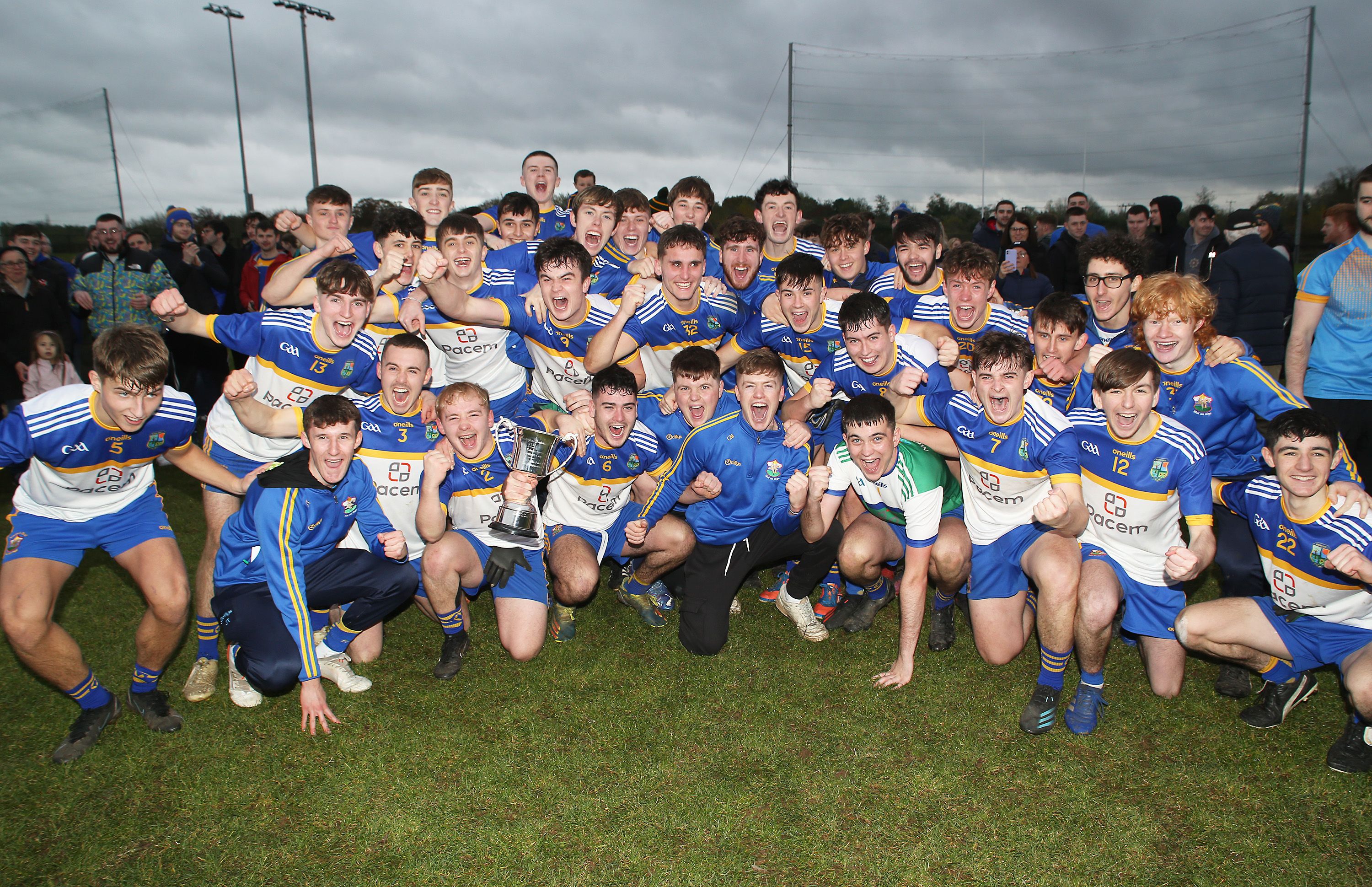 TWO goals in the space of a minute soon after the break from half-time substitute Niall Duffy ultimately proved the decisive scores as St Brigid's claimed the Antrim U20 Football Championship at the expense of Moneyglass at a windswept Dunsilly on Saturday afternoon.

The South Belfast side had been trailing by two at the break having played into the tricky wind, but had also left quite a few scores behind them including a 26th-minute penalty that saw Rory Gribbon save from Reuben Carleton.

Yet, they had been creating the chances and found the scoring touch in a flying start to the second period that saw a two-point deficit turn into a two-goal lead.

"The lads had been in that position before," said joint manager Mark Kelly.

"In the league at Ballymena, same against St Gall's and Cargin (in the Championship) they know how to deal with it and don't drop their heads. They stick to the plan and it paid off again today."

This was a very lively affair with Moneyglass refusing to go away and got back to within a goal entering the closing stages with the hugely impressive Tiernan McCormack a threat along the right flank and Connlaoth McCann kicking the scores, but the victors found a response with Ronan Boyle making a huge fetch to tee-up Conan McNicholl for a score to steady before landing a beauty of his own to finally put this game away.

In defence, Daniel Harrison was assured and broke well from the back, whilst midfielder Donal Bradley was another to put in a big shift on the day when their main men stood up when they needed to.

"Niall has done it for us before: the St Gall's game, the Cargin game and there again today - he just injects that bit of energy and is the danger man," added Kelly.

"Ronan has been a star player for the team and at times like that you need a man you can trust to field the ball, keep the ball and he was again the man for it."

Moneyglass had the wind at their backs for the opening period and they wasted little time in getting on the front foot with their pace apparent as McCormack made a lightning break from the off and played into Shay Madden, but the shot was short as the Biddies made their first foray into Moneyglass territory.

They made it count as Lorcan Burns kicked the score, but the South West side were quickly on terms through McCann.

McCormack would make another attack at pace, this time feeding Kevin McCann to score, but a good move at the other end resulted in Ronan Bradley levelling as this game opened with both sides keen to get on the front foot.

The Biddies edged back ahead on 11 minutes as Conan McNicholl opened his account for the day after claiming a mark, but this would prove to be the South Belfast side's final score of the opening period as they struggled to find the accuracy in front of the posts as the elements proved problematic.

Moneyglass tied the game again with Frank Duffin feeding Conor O'Kane to score, but the attacking avenues were beginning to close with St Brigid's starting to dominate the ball if not the scoreboard.

Carleton's 26th-minute penalty was saved by Gribbon - awarded when Liam Finnegan was trailed back as pulling the trigger inside the area after Toirealach Brolly's dropping shot broke into his path.

It seemed a big moment as Moneyglass survived, cleared and went straight upfield with James McCormick pointing and a late McCann free helped them into a 0-5 to 0-3 half-time lead.

This game would take little time to swing after the restart as Duffy's introduction would immediately pay off as a quick free into Oisin McDonnell saw the corner forward in, but unselfishly squared to the back post with the substitute palming home with his first touch.

His second touch less than 60 seconds later saw him get a touch to Donal Bradley's shot that came off the post, but he regathered the rebound and lashed to the net.

Brolly added a point and although McNicholl kicked a free to leave those two goals in it, it could have been one as Declan Heery was alert to turn a McCann shot out for a 45 that came to nothing.

Credit to Moneyglass as they seemed to suck up this difficult period and had another goal chance on 43 minutes a beautiful ball put McCann in on the right, but his rasping drive clipped the top of the bar and went over.

Duffy could have completed his hat-trick on 49 minutes, but his low shot across the face of goal went just inches the wrong side of the post - a reprieve for Moneyglass who were still in it and then within striking distance as McCann kicked two frees to leave a goal in it with seven to play.

Just as it seemed they had momentum, Boyle made that outstanding fetch around the middle and fed McNicholl for a wonderful score and the centre-forward kicked his fourth of the day with the outside of his boot after Boyle landed his own beauty.

Now the Biddies could finally relax with Moneyglass chasing goals, but could only manage a point as a late McCann effort from a 20-metre free flew over as St Brigid's completed the clean sweep of U20, U17 and U15 Antrim titles for 2022.

"It's massive and bodes well for the future of the club," Kelly agreed.

"The lads deserve this as they've worked so hard. They are a great team and got what they deserved today."