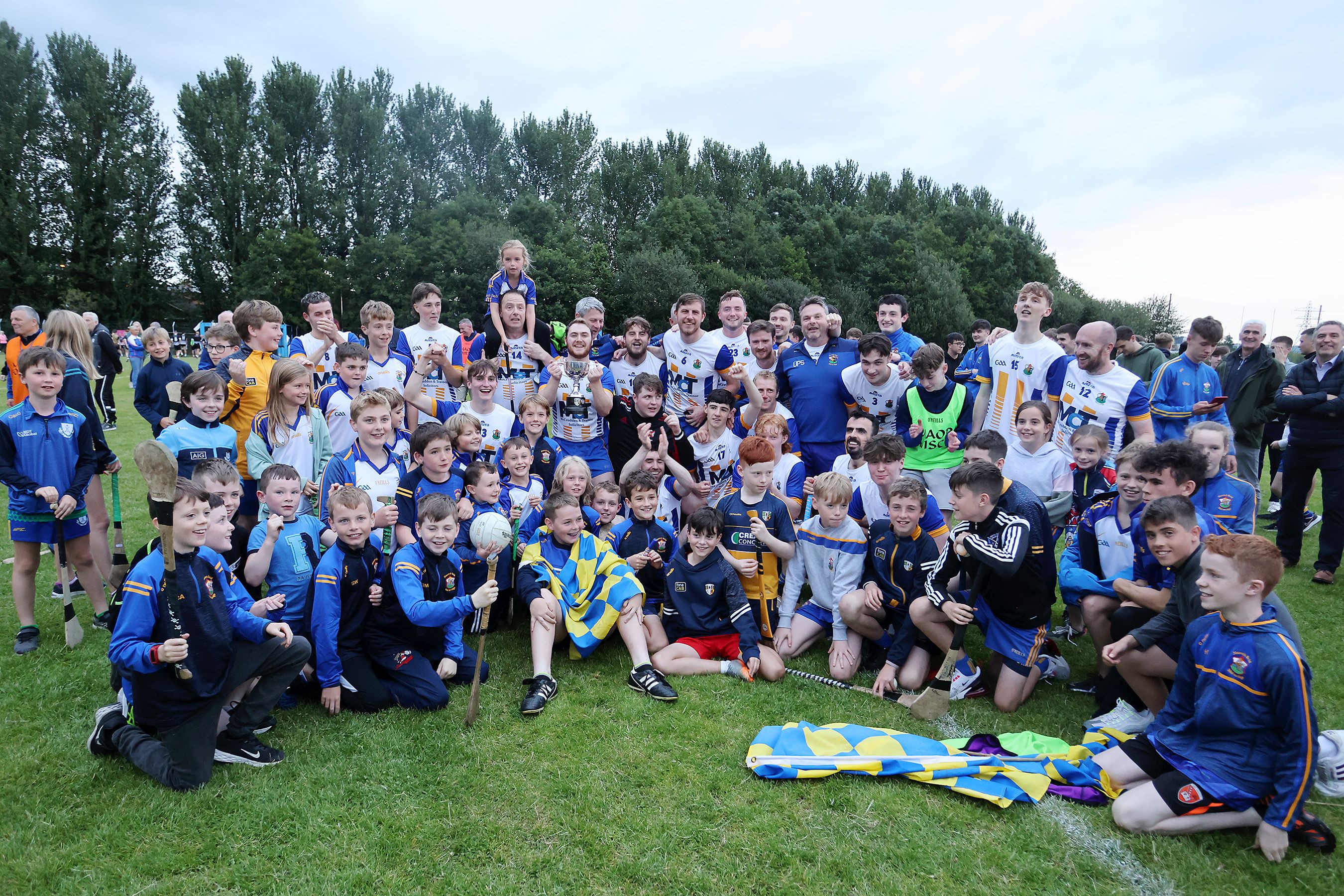 St Brigid's players, supporters and management celebrate with the cup after the game John McIlwaine

A BLISTERING start and a strong finish saw St Brigid's claim a first-ever senior hurling title as they landed the Junior B crown in a very lively affair against Ardoyne at St Gall's on Wednesday evening.

Fintan Cleary was the star of the show, finishing with 2-8 overall with 2-2 of that total from play.

Even the dismissal of substitute Phelim Lennon, who still managed three points despite being on the field for eight minutes, couldn't help the North Belfast side as the tide had turned just when it appeared they had tipped the balance in their favour with a flying strut to the second half that was inspired by their best of the evening, Daniel Moore.

Yet the South Belfast side - that only revived senior hurling in the club around 18 months ago - were worthy winners as they were much better in the opening period and when the pressure came on inter third quarter, found the answers to reassert themselves and gradually pulled away.

Defensively they were assured with Cathal Conway and Peter Heaney delivering huge performances to anchor the defence, and while both sets of players left it all out there, it was the victors who were just that bit better on the night.

They couldn't have asked for a better start as the ball was in the net after just 15 seconds when Niall Murtagh raced forward from the throw-in and whilst his shot came back off the post, Cleary was on hand to blast to the net.

A second goal wasn't long in coming as on four minutes in a reverse from the semi-final, it was John McGuckian who was the provider for Niall Duffy to whip home.

Ardoyne appeared shellshocked by the start made by their opponents but they gradually settled with Moore getting them off the mark six minutes in as he darted upon the right and clipped over with Aran Stewart converting the first of his five frees in the game.

Cleary hit back with a point from the right and while Jim McAuley landed a fine score in reply, Ardoyne were struggling in attack as they couldn't secure possession with the ball coming straight back out and while St Brigid's were off target with a few chances, they did start to build a healthy advantage with Clearly converting three frees and then Kevin Grieve landed a stunning score with a turn and shot from deep after receiving a crisp pass.

Indeed, the St Brigid's men were better in possession as they found their men that bit better and this was making a difference as a barn 15-minute spell for Ardoyne came to an end with Stewart pointing a free.
Cleary responded in kind, but in a lengthy period of first-half stoppage time, Ardoyne appeared to come to life a little with Stewart pointing a free and then Moore reduced the gap to six with a point from play.

They could have halved that deficit with the final play of the opening period with Oisin McVicker's initial shot stopped on the line, in the ensuing scramble, the Biddies cleared to maintain a 2-6 to 0-6 advantage.

It was a fired-up Ardoyne that emerged after the break and they tore into the game with much more purpose and used the ball a lot better.

Jim McAuley landed an early point and then came the goal their challenge needed as Moore burst forward at pace in the 33rd minute with his low shot from range deceiving Chris Lundy and finishing up in the net.

Ardoyne's tails were very much up and they completed the turnaround on 38 minutes as Dan Goodall floated a good ball forward to McVicker who rose well to catch and produced a finish to match, giving Lundy no chance as from right down just before the break, they were now one ahead.

It seemed momentum was now with the North Belfast men, but enter Lennon who missed out on a starting berth due to a hamstring injury picked up in Saturday's semi-final. He showed no ill effects as he gathered off a break with his first touch and split the posts to level and ensure his side trailed for just that one minute of play on the night.

Moments later and he nipped in to gather through a ruck to players to restore his side's lead and then converted a 65 after St Brigid's were left wondering how they didn't find the net when first, McGuckian was denied from Ardoyne goalkeeper JP Agnew and Paul Baker stopped the follow-up on the line to turn it around the post.

That third goal for St Brigid's wasn't long in arriving as on 44 minutes, Kevin Grieve sent in an inviting ball inside to when Cleary fetched superbly and the man-of-the-match wouldn't be denied, firing past Agnew.

Just as it seemed St Brigid's were back in firm control came a bit of a coming together with Lennon's involvement deemed worthy of a red card by referee Eamonn Hamill despite the fury of the St Brigid's sideline.

As it transpired, the numerical disadvantage made no odds as Oisin O'Donnell landed a fine score from out on the left and while Ardoyne did hint at gaining another head of steam with back-to-back pointed frees from Stewart that brought them to within four, St Brigid's produced the better finish in the home straight.

It was Cleary who led the way, firing over from out on the right and adding another two from frees to make the game safe with a goal from a Hugh Grieve free deep in stoppage time for Ardoyne little more than a consolation as St Brigid's celebrated victory.

A first title for the Biddies and not only that, but they will continue their season as they are now into this year's full Junior Championship with an opening game against Davitt's to come next Friday.