Gaelic Games: Ulster Minor Club Tournament at St Paul's is back for 2022 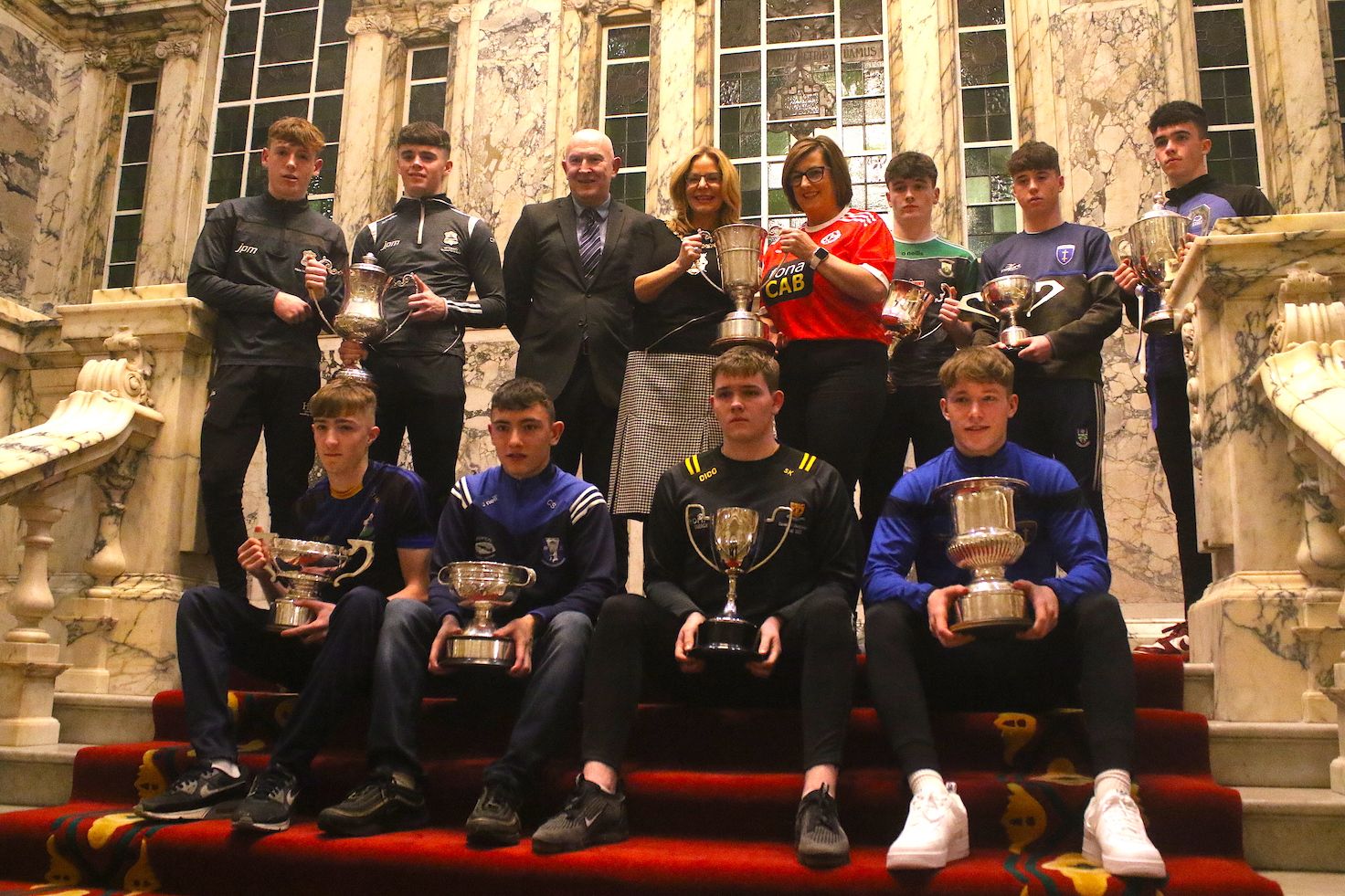 Captains from the county champions along with Lord Mayor Christina Black, Stephen Anton from sponsors fonaCAB and Caroline McLaughlin, St Paul's Chairperson, at the launch of the Ulster Minor Club Football Tournament at City Hall on Monday Kevin Herron

AFTER a three-year Covid-enforced hiatus, the fonaCAB Ulster Minor Club Tournament at St Paul's is back.

The tournament is one of the most exciting competitions in the GAA calendar as the minor - now U17 due to the changed age grades - champions of each Ulster county make the trip to the Shaw's Road to battle it out for the Jimmy McConville Cup and with this year being the 40th anniversary of its inception, there is no better time for its return.

At Belfast City Hall on Monday, Lord Mayor Christina Black welcomed representatives of the clubs involved and organisers St Paul's into the Lord Mayor's Parlour for the launch and all-important draw.

The action will begin on the weekend of December 10/11 with the traditional St Stephen's Day semi-final and New Year's Day final in place.

Due to its enforced absence, there was always a concern it would be a challenge to bring the competition back, especially owing to the minor grade now one-year lower, but hard work in the background ensured its return and St Paul's spokesperson Conor McCartan is grateful to all who have made it happen.

"When you lose anything Covid-related, the opportunity to come back in any setting in life is tough, but we're just delighted to have this back," he said at City Hall on Tuesday.

"There was a lot of work that went in over the past six or nine months to get it going at U17.

"We got absolutely bombarded last year when we weren't having it despite the county championships taking place. That showed there is a massive will within the GAA community to get it back going again.

"We're delighted to be working with the Ulster Colleges and the Ulster Council to come to an agreement to get it done."

The preliminary round will see Donegal champions, Four Masters, face the Fermanagh representatives, the identity of whom is yet to be revealed as the minor championship is ongoing in the Erne County.

Irvinestown meet a Coa/Ederney combination (St Oliver Plunkett's) in one semi-final while Cleenish  (Belnaleck/Belcoo) await the winners of a replay between Derrygonnelly and Newtownbutler in the other last-four tie.

The remaining champions are in place and the opening day will see Antrim champions St Brigid's face 2017 winners Burren, the Down side the only previous winner involved in this instalment.

On the same side of the draw, Cavan's Ramor United face 1990 champions Dungiven who will be hoping to keep the trophy in the Oak Leaf County following Lavey's win on New Year's Day, 2020.

The other side of the draw will see Tyrone champions Donaghmore face Scotstown from Monaghan, whilst the winners of the preliminary tie will meet Armagh's Clan na nGael.
The breakdown of times and dates for each game will be announced later this week, with Coláiste Feirste also to be used as a venue alongside St Paul's in the early stages.

"The big selling point is that this is the 40th year, so it's perfect to have it back in this particular year," added McCartan.

"It takes place at a time when there is not much sporting activity, especially GAA activity, over the Christmas holidays.

"It's nice to have that focus again as to what we are going to be doing on St Stephen's Day and New Year's Day, plus the lead-up to it.

"All of the representatives of all the clubs have travelled up tonight despite it being a six-hour round trip for some of them. That just shows the commitment they have to the tournament and what it means to the kids at this age group throughout Ulster, so we're delighted to have this back."

Those who have been regular attendees over the years will have witnessed young players who have gone on to become household names with names such as Patrick McBrearty, Ryan McHugh, Peter Harte, Darren McCurry, Cormac McAnallen, Johnny McBride and Paul Brewster just some who have taken part in the competition.

Undoubtedly, there will be some players preparing for this year's return who will go on to forge exciting careers at senior inter-county level and this factor will add to the magic of the competition.

"We were talking about it in the club the other night that you look at Crossmaglen (seniors) now and a lot of them, the likes Rian O'Neill and Oisin O'Neill, have all played in this competition," McCartan pointed out.

"Also, the four-in-a-row (Ulster minor) Glen team has now translated into senior success for them with the likes of Conor Glass, Danny Fallon and others who went through over the years like Emmett Bradley who won it the first year of the four they won at St Paul's, so it's great to see those players progress into senior activity and success."