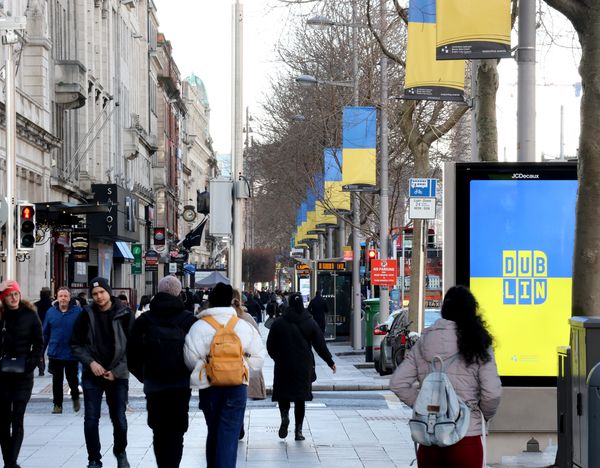 NAILING COLOURS TO THE MAST: Flags erected along the entire length of O'Connell Street in Dublin in solidarity with Ukraine Photograph: Sam Boal / RollingNews.ie

THE Russian invasion of Ukraine continues to dominate the news agenda. Lines of tanks and armoured vehicles inexorably move toward Kyiv and other Ukrainian cities. Images of hospitals and family homes bombed and destroyed, of refugees, particularly children, the elderly and disabled forcibly fleeing has led to a massive outpouring of solidarity. People want to help. Some provide food and clothing for shipping to Ukraine. Others offer to provide shelter for those refugees who make it to our shores. All very worthwhile and commendable.

However, some in the political and media establishment in the South have cynically seized on the current crisis to argue for an end to Irish neutrality. Some media commentators have worked themselves up into a militaristic frenzy. They want the Irish Government to sign up to a European Army and NATO. Many of these are the same people who support the continued use of Shannon by US war planes.

Leo Varadkar spoke recently of the need to “think about deeper involvement in European Defence”. Neale Richmond, a Fine Gael TD, wants Irish missiles to be sent to Ukraine. Micheál Martin told the BBC on Sunday: “We will have to reflect on this military neutrality position more generally.”  The Taoiseach claims that changing neutrality is simply a matter of a change in government policy. The fact is that any formal participation in a European common defence structure would require a referendum.

The Taoiseach has said Irish neutrality should evolve with changing times.
Speaking in Washington DC, Micheál Martin said Ireland's military neutrality did not mean the country was politically or morally neutral on the Russian invasion of Ukraine | https://t.co/S9JZoeoxlI pic.twitter.com/xJLDjC2qyv

Of course, if the Irish Government was serious about confronting the militarism and imperial ambitions of Putin and his oligarchy friends it would move urgently to close down the financial arrangements that have allowed billions in Russian money to be moved through the financial institutions in Dublin. For the past two years Sinn Féin TD Mairead Farrell has pursued this issue in the Dáil.  Research two years ago revealed that over a 12-year period up to 2017 an estimated €118 billion passed through the IFSC (International Financial Services Centre). The Irish government has waffled and evaded and refused to engage on this issue. It prefers instead to opt for a debate on neutrality which would see the Irish state pay out huge sums on armaments and be prepared to send Irish women and men to fight in international wars.

Despite the hyperbole around neutrality, and against the backdrop of the Russian invasion and the catastrophic humanitarian crisis it has created, the most recent opinion poll conducted by the Amárach polling group showed that 76 per cent of Irish people continue to support Irish neutrality. It is for this reason that many countries, who see the Irish state as non-aligned, voted for the Irish Government to have a seat on the UN Security Council. The commitment to humanitarian missions and the role of Irish soldiers in countless UN-endorsed peace-keeping missions is a diplomatic strength, not a weakness. And it is in this context that an Irish Government has an important role.

While others shout for war we must be promoting the imperative of negotiation and of dialogue. There can be no military victory in the war in the Ukraine. Even if Russian forces succeed in completely occupying Ukraine that will simply mean the war taking on a different style. The people of Ukraine have demonstrated a fierce and courageous determination to defend their homeland and to uphold their right to self-determination and independence.

The only viable solution to the war in Ukraine is diplomatic. This will emerge through dialogue and negotiation. That should be the focus of the Irish Government.

Every opinion poll ever published has endorsed neutrality as the preferred policy position of the Irish people. Instead of abandoning neutrality we should be adopting a policy of positive neutrality and enshrine it in the Irish Constitution. The Irish state should not be part of any military alliances.

Micheál Martin’s willingness to consider holding a Citizens’ Assembly on neutrality is in stark contrast to his refusal to consider a Citizens’ Assembly on the issue of unity. It would appear that sending Irish men and women off to fight wars in other places is more important than ending the schism on the island of Ireland caused by partition and finding a peaceful future with our unionist neighbours.

No doubt this column will return to this issue.

Dublin should honour its voting promise

AS readers will know, citizens outside the Southern state, including those in the North, are denied the right to vote in elections to select the President of Ireland. This is despite support for this right by the current government. It is in the Programme for Government. It is also supported by a Constitutional Convention.

In June 2019 as Teachta Dála for Louth I cautiously welcomed a decision by the then Irish Government to hold a referendum on presidential voting rights. The referendum was scheduled for October of that year. This was not the first time a date had been set for this referendum.

In 2013, the Constitutional Convention agreed that Irish citizens in the North and the diaspora should have the right to vote in presidential elections. In November 2015 the Joint Oireachtas Committee on European Affairs recommended extending the voting rights. In October 2018 An Taoiseach Leo Varadkar announced that a referendum would be held in May 2019. None of this happened.

Seanadóir Niall Ó Donnghaile has pursued government Ministers on this issue since his election to the Seanad six years ago. The last time Niall raised it as a Commencement Matter in the Seanad was with the then Minister of State with responsibility for the diaspora in November 2020. Back then the country was in the grip of the pandemic and it wasn’t possible or practicable to hold a referendum due to the health restrictions.

Two weeks ago Niall raised the Presidential referendum with the Minister of State, Frank Feighan, who has over the years expressed his support for the referendum also.

During the debate in the Seanad Niall remarked that over the St Patrick’s Day period many ministers and politicians will be travelling overseas to join in the celebrations.

At least 33 in-person visits will take place to venues in the USA, Canada, the EU and elsewhere and where no such visits occur the local Embassies will facilitate celebrations. This is a measure of the size of the Irish diaspora scattered across the globe. A key issue of concern for the diaspora is the right to vote in presidential elections.

Niall also reminded the Minister that Leo Varadkar, when Taoiseach, promised citizens in the North in December 2017 that “no Irish government will ever again leave northern nationalists behind”. Niall called on the government to honour the commitment it has made to the diaspora and to extend full citizenship rights to the people of the North and hold a referendum in this “crucial and opportune timeframe”.

He recalled the extensive preparatory work that has already been done: a commitment from the Constitutional Convention; the legislation had been published but fell during the previous Oireachtas; it was then reissued, republished and returned to the Order Paper.

One of the most basic rights and entitlements of any citizen is the right to vote.

The President is not the President of a land mass, as he recently said eloquently – he is President of the Irish people. It is only right that all Irish people have the entitlement to vote whether it is the global diaspora family or our fellow citizens just up the road in the six counties. It is time for the government to outline a timeframe and to implement this non-contentious commitment.

NOW that the pandemic restrictions are eased it is great to get out and about again. Of course, the pandemic hasn’t gone away so it is still important to take common sense precautions.

This last week or so I have been galloping around book gigs in West Tyrone, South Armagh and County Down. The events are good fun. Relaxed discussions about books and writing.

I have also planted a Crann na Saoirse in Crossmaglen, Sion Mills, Kilcoo and Hilltown. It is a great time to enjoy the countryside. Spring is coming.

The quare stretch in the evening is a joy to behold. Daffodils, snowdrops and other bright hopeful flowers are popping their heads above the soil.

Whin bushes are in full bloom. Hawthorn is starting to blossom. In a month’s time the hedges and trees will be green and vibrant. So get out and about my friends. Fresh air is still free. Enjoy it and all the beautiful places we live in.

I WAS delighted to be in Downpatrick this week. A fine historical town forever connected with Saint Patrick.

I was shot around this time in 1984. My Uncle Paddy died on St Patrick’s Day after visiting me in the hospital. He loved being Irish and always drowned his shamrock on our national day. So I always raise a glass to him on the 17th.

Enjoy St Patrick’s Day here in Ireland, or wherever you live in the world. We have a lot to celebrate.