Gleeson happy with Antrim progress ahead of trip to Tralee 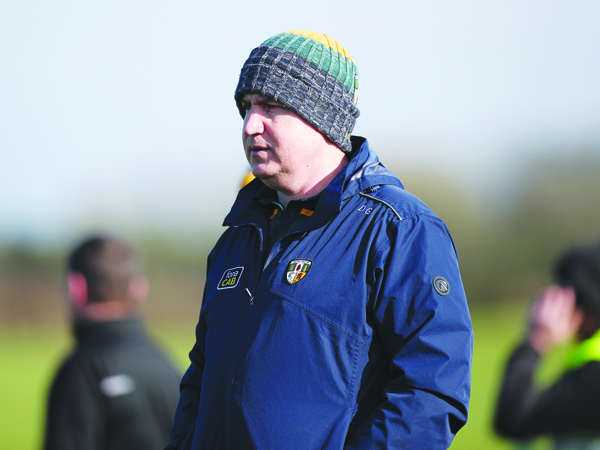 Darren Gleeson has praised the work-ethic of his players

WITH three wins from three and six points already banked, Antrim’s hurlers can take a huge step towards the Division 2A final should they continue their winning form against Kerry this Sunday.

The Saffrons will make the long journey to Tralee with a little bit of pressure off thanks to last weekend’s 24-point trouncing of Meath in Portglenone.

As things stand, Kerry have played a game more than Antrim and Offaly who the only teams who can reach the final, but Antrim hold a much better scoring difference over their rivals should that tie-breaker be needed at the end of play.

However, Antrim will be hoping that won’t be required as they will be confident they can get the results they need to get there in a more straightforward manner.

The first opportunity arrives this weekend as they take on a Kerry side that is also perfect so far having won all four games and are also on the brink of a final berth, needing just a draw to make absolutely sure this weekend.

“Whoever wins this is in pole position but I suppose we’ve earned the right of two semi-finals now,” said Antrim manager Darren Gleeson.

“This is effectively a semi-final and whatever way that goes, we’ve another one the following weekend (against Offaly). These are big games, but the ones you want to be playing in.

“Maybe the weather will be a bit kinder, but we’re looking forward to these two away trips although they won’t be simple.”

While not simple, they are certainly winnable.

Kerry defeated Antrim in the opening game of the 2019 league at Corrigan Park, but were well beaten when they returned north for the Joe McDonagh Cup as the Saffrons romped to an impressive win.

That result perhaps broke a recent trend of The Kingdom winning close games between the pair, but Kerry will feel they can make home advantage count and they have the players to do so.

Shane Conway, Mikey Boyle, Michael O’Leary and team captain Colum Harty all have the ability to cause problems, so Antrim’s task will be on wining the individual battles and playing for the entire 70 minutes.

Despite their huge win against Meath at the weekend, there was that almost traditional Antrim lull where they switch off for 15 minutes. A repeat on Tralee this Sunday will be punished, as will passing up scoring opportunities with poor wides and bad decision-making.

“The only thing was that it was unopposed striking we’d hope they would be punishing,” Gleeson said of the high wides tally on Sunday.

“Maybe the areas they were taking the shots from weren’t ideal. It was in the second half most of them happened and they should have known the wind was coming from left to right. That’s basic stuff.

“When you lose your concentration for 10 or 15 minutes, that’s when it happens. Maybe it happens because guys are looking to take scores to cement their place, but that gives us something to work on.”

Gleeson has been happy with how things have progressed since taking over.

There have been many more good performances than bad with the efforts on the training field coming to the fore on game day.

Recent weather has made it difficult for hurling in general, but Antrim have adapted well and this momentum and form is a positive heading into two crunch games that will either make or break their promotion ambitions.

“We have 33 good men on the panel all training hard,” reports the Tipperary native.

“If they stay doing it, we might end up in a league final, but if we don’t it won’t be for the lack of effort.”