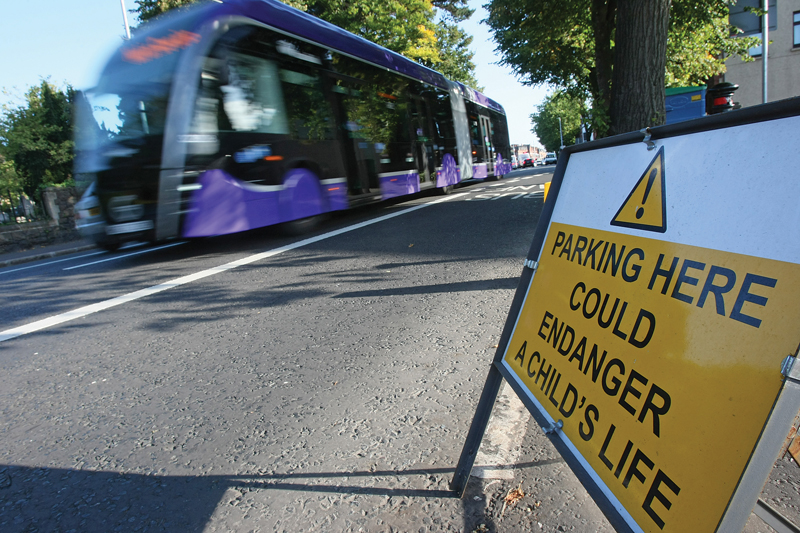 The £90million Glider system will travel the new cross-city routes between West and East Belfast (G1) and from the city centre to the Titanic Quarter (G2).

The new controversial 12-hour bus lanes built to accommodate the service will operate from 7am and 7pm Monday to Saturday.

Last week, the Department for Infrastructure announced that a 12-month scheme allowing private hire taxis to use the lane has been put on hold.

In West Belfast some parents have expressed concerns that the bus lane that passes one local school have left them with nowhere to drop off or pick up their children.

Drivers have been warned not to park in the new bus lanes, but at St Kevin’s Primary School on the Falls Road, many parents felt they had no choice but to flout the rules.

St Kevin's Primary School Principal Fiona Keegan said: “I don't think it's an ideal situation at all. It's very unfortunate that our parents are now in a position where they have nowhere safe to drop their children off in the mornings and are being forced into the local streets, which is causing congestion.

“Not all of my children come from the local surrounding area and therefore can walk to school. We service families from beyond West Belfast, a lot of parents do have to travel. Also, although we are a mainstream school we have a lot of children who have additional learning needs and any change of their morning routine can be detrimental to them and we have to be very aware of that and for children particularly with any sort of autism diagnosis getting out of a car to walk across a main road is very worrying for a parent.”

School caretaker Tony Murphy said: “Many of the parents had no choice but to park in the cemetery this morning which isn't ideal for anyone, also if you look at the bus lane line, our teachers have to break it to get into the staff car park. The side streets were always busy but now they are going to be ten times worse. We put signs out about parking to stop the parents pulling up and then having to reverse out, in case they hit a child. People are getting picked up in taxis in the outside lane and cars are stopping there and the kids are getting out and crossing the road.”

One local man who did not wish to be named said: “I'm a taxi man but this morning I decided to get my bike out and see what it would be like in the bus lane. I've cycled from the Michael Ferguson roundabout to here, it took me 23 minutes and the Glider has yet to pass me. My intention was to stop it by cycling in front of it, I see some cars parked here in the bus lane and I don't blame them. People would put up with it if it was for the greater good but it's not.”