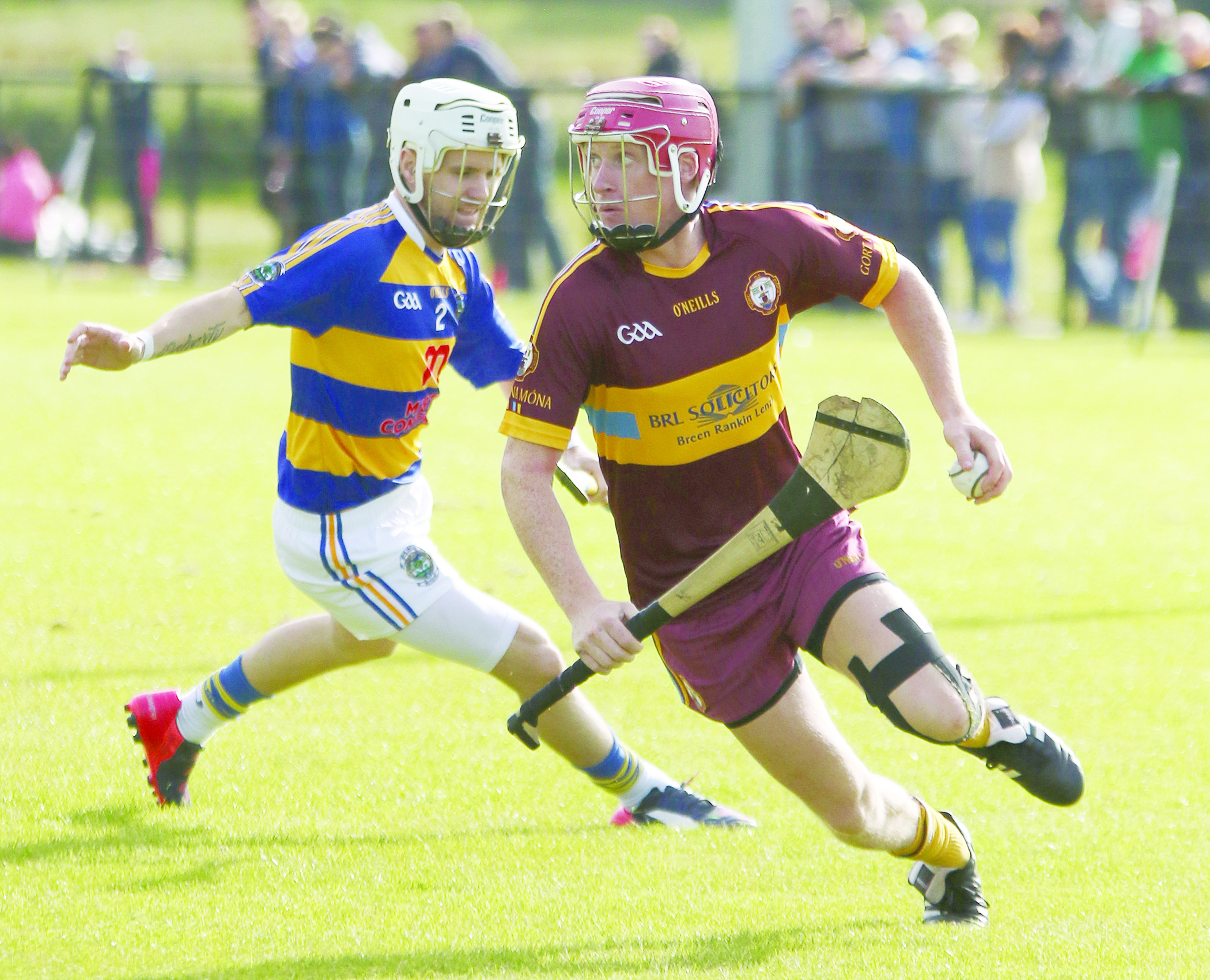 Gort na Móna forward Desy McClean shows Rasharkin’s Daniel Doherty a clean pair of heels during Saturday’s Championship clash in Ahoghill. The Turf Lodge men progressed with a nine-point win but the former Antrim star knows more will be needed when they take on Cloughmills this Sunday in the next round

AN impressive second display from Gort na Móna saw off the challenge of Rasharkin in the preliminary round of the Intermediate Hurling Championship in Ahoghill on Saturday evening.

The Belfast side looked like they would coast to victory after goals from Patrick McCaffrey and Martin Ward helped them establish a six-point lead with just 12 minutes played.

However, a penalty from Eamonn McNeill on the stroke of half-time put St Mary’s back in contention, but they failed to capitalise on their lifeline and the Turf Lodge men pulled clear after the break with former county man Desy McClean scoring their third major with a delightful finish from a tight angle.

Although they will look forward to testing themselves against Cloughmills this weekend in the quarter-finals, McClean says avoiding relegation remains the primary objective of what has been a turbulent year so far.

“We are happy enough with the result. Rasharkin gave it a good go,” said McClean

“We are only starting to get going.

“We didn’t have a manager for a while and we are trying to pick up the pieces.

“We have got Paul (Lennon) in there now and we are starting to get good sessions.

“We are trying to build on every match and trying to stay up (in Division Two).

“We will take every Championship game as it comes.

“At half-time, we said we fell asleep for the last 15 minutes of the first half.

“They hit 1-6 from frees in the first half which tells its own story.

“We settled down in the second half and the goal helped us pull clear from them in the end.”

The free-taking prowess of Eamonn McNeill helped keep Rasharkin in touch during a difficult opening period for last year’s Junior champions. McClean teed up McCafferty for the game’s opening goal after three minutes and midfielder Gary Doyle send over a booming point moments later as the West Belfast men stated their intentions from the off.

A third pointed free from the hurl of McNeill reduced the gap on nine minutes but Rasharkin were caught out at the back when an under-hit McClean free dropped into the danger zone and full-forward Martin Ward reacted quickest to bundle the sliotar home from close range.

McClean hit three points in quick succession (two frees) as the Gorts sought to stretch their advantage. McNeill landed another mammoth free before his fellow half-forward James Scally riffled over a point from over 70 yards out to give St Mary’s a much-needed boost.

Gort na Móna failed to raise a white flag for the final nine minutes of the first half and Rasharkin made them pay when referee Fionntan McCotter awarded them a penalty in injury-time.

Christopher Devlin was adjudged to have pulled back Conor McFerran and the in-form McNeill made no mistake as he drilled his shot past James O’Mullan.

Gort na Móna’s advantage was now just 2-9 to 1-8 but McClean increased this early in the second half with another free before the industrious Sean Kelly landed his second of the evening.

Thomas McCaffrey then showed great awareness to hook Daniel McKay as the Rasharkin defender tried to clear his lines and completed the turnover by scoring a fine point.

He repeated his efforts a minute later as Gort na Móna moved 2-13 to 1-8 ahead.

Just like the first half, Rasharkin refused to wilt and frees from Conor McKeever (two) and McNeill kept them within striking distance.

However, they never looked like creating a goal-scoring chance which they badly needed to turn the tide.

Indeed, Paul McFerran’s side failed to score for the final 12 minute of normal time as their challenge petered out.

The game was all but over as a contest by the time the McClean bagged his side’s third goal. A great pass from Declan Hughes freed the Gort na Móna sharp-shooter and McClean blasted the sliotar across the face of goal and into the bottom corner.

Martin Ward could and probably should have added another moments later but his thunderous shot flew just over the crossbar.

While Gort na Móna won with a something to spare, much more will be required to defeat St Brigid’s, Cloughmills (Sunday, 3pm, Loughgiel).

The North Antrim side are currently top of the Division Two standings and are in pole position to seal promotion while Gort na Móna are second from bottom.

“It is a different story altogether. Cloughmills are sitting top of the league - they are flying,” added McClean.

“We have played them, we know what they are about.

“We’ll just try and get a gameplan to try and stop their forwards.

“We will regroup this week and see what we can do.

“Cloughmills will be favourites but we don’t mind being underdogs.

“In all the years I have been involved with Gort na Móna, we have always been underdogs.”

Although he contributed a crucial 1-4 to his side’s cause, McClean conceded that he is far from 100 per cent fit and he took to the Ahoghill pitch sporting a heavily strapped left knee.

While he is keen to help extent Gort na Móna’s Intermediate Championship season for as long as possible, he is also longing for a winter break and a chance to properly assess his injury. A return to the Antrim senior hurling set-up is also in the back of McClean’s mind.

“I am not fit. I have had problems all year,” added the Gort na Móna ace.

“I need to get an MRI scan to see what is going on. It is bringing me down at the minute.

“I am not the same player. I can’t do the things I used to be able to do.

“I need to get a good rehab done this winter and try to get back to my best next year.

“I want to get back to my best and playing county hurling if i can.”

The Turf Lodge men had a number of contenders for Star man including goal-scorers Desy McClean, Patrick McCaffrey and Martin Ward. Declan Hughes and Connor McCann also had fine game but Sean Kelly gets the nod. He scored two fine points but his work rate was exceptional and he was involved in a number of scores for his side.