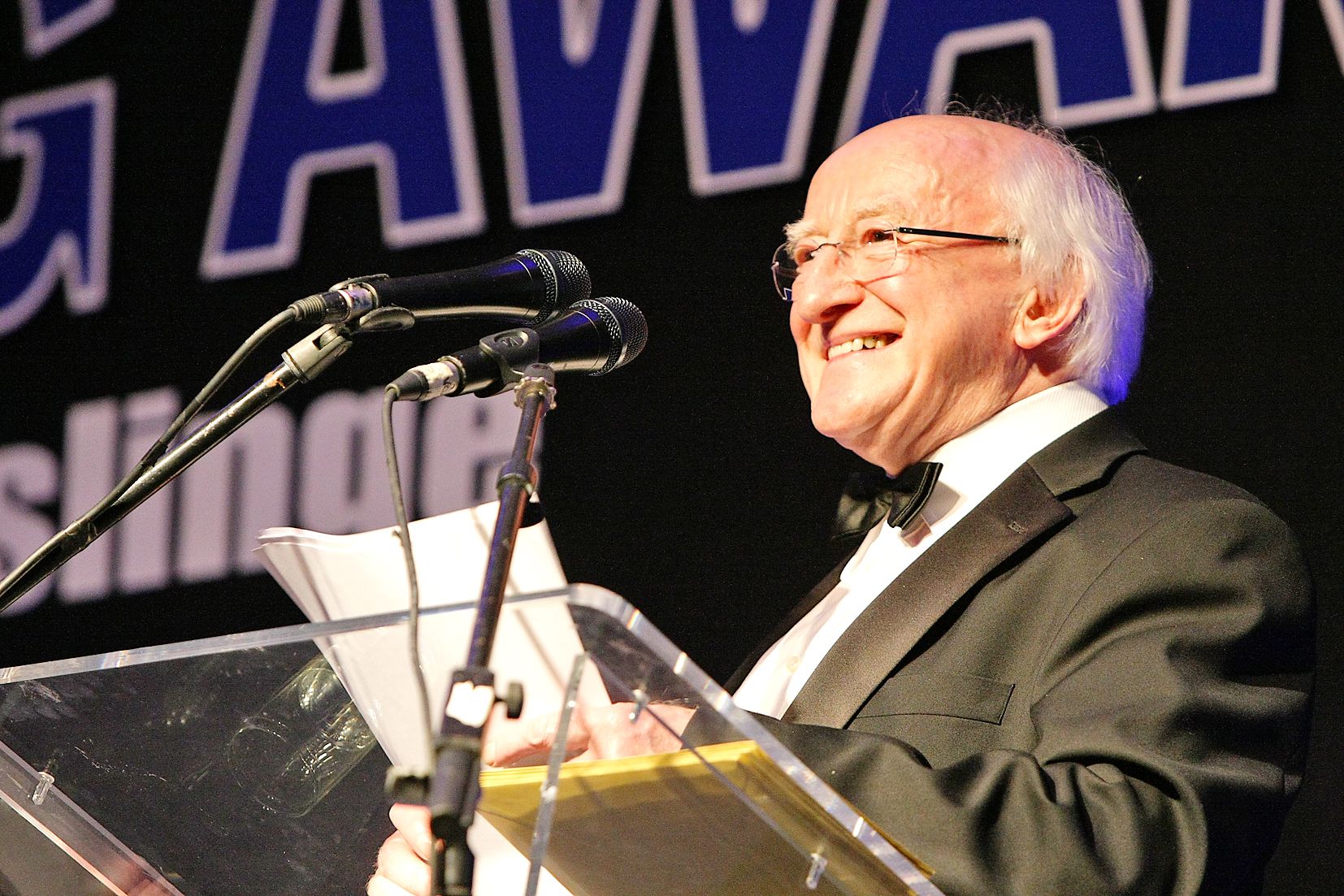 FURIOUS FURORE: Unionists were angered when President Higgins turned down that invitation

AS the furious furore surrounding the decision by President Michael D. Higgins not to accept an invite to an ecumenical church service in Armagh broke out, the DUP was left with something of a challenge. Who should we put out to express our outrage at a slap in the face for respect and a shared future?

Clearly, it would have to be someone well-known for his or her commitment to a shared future and tp respect; someone who would be able to speak with gravitas and authority on the subject of good relations; someone who will make an audience sit up and pay attention when the subject of living together arises.

And so they picked... Gregory Campbell. Oh, yeah, Gregory ‘Curry My Yoghurt’ Campbell, whose most notable foray into the tricky territory of mutual respect got him barred from addressing the Assembly in 2014 for a day.

If you're a Leaver and you're still doing a Three Monkeys about Brexit, I suggest you Google the home pages of the top English and European newspaper websites and see who's battling shortages. What a mess that country's in.

The then double-jobbing East Londonderry MP, asking a  question  about the Irish language and Ulster Scots of Culture Minister Carál Ní Chuilín, opened with “Curry my yoghurt, Can Cocacoalyer.” That provoked the ire not only of Ms Ní Chuilín, who accused him of “pure ignorance” and refused to answer his question, but of Speaker Mitchel McLaughlin, who slapped on him that one-day speaking ban.

During his party’s annual conference a few weeks later, an unapologetic Gregory doubled down on his hilarious outburst, producing a pot of yoghurt and telling  delegates, to much guffawing, that he planned to have curry for lunch. Greg was only warming up at that stage. Later in the same speeech he said: “On behalf of our party let me say clearly, and slowly so that Caitríona Ruane and Gerry Adams understand, we will never agree to an Irish Language Act at Stormont and we will treat their entire wish list as no more than toilet paper. They better get used to it.”

But come on, a small voice pipes up from the back, that was seven years ago and Greg’s a different man now, isn’t he? Doesn’t everybody deserve a chance? Well, yes, except that Gregory still thinks curry my yoghurt is comedy gold and political savvy wrapped in the perfect package. Just last July on Facebook he shared his thoughts on a BBC World War II documentary he had just watched.

“I'm informed that BBC 2 NI had a programme on tonight about a suspected German spy who lived in the RoI during the war. [Note to Gregory – the Republic of Ireland wasn’t created until 1949.] The humourous (sic) bit was that he was supposed to have spoken Irish with a German accent. I vill not be tempted to ask vot is dis curried yoghurt mein herr.”

And so enter Gregory Campbell, the Kumbaya-strumming diplomat to wax lyrical about his sadness and disappointment at a lost chance of community outreach. It was all the more regrettable, he told BBC Ulster’s ‘Talkback’, because President Higgins had been doing such a fine job in walking the political tightrope. But while Squinter has been easily able, thanks to Professor Google, to access Gregory’s colourful commentary canon, he hasn’t been able to find the time –  pre-invite controversy – when Gregory shared his positive thoughts about the President.

And as the President’s invite row begins to run out of steam, we now await the next trigger of unionist fury, because it’s pretty clear that superficial identity and culture issues are the weapon of choice for the DUP as Sir Jeffrey Donaldson begins the task of turning around the party’s plummeting poll ratings. Squinter’s guess is that the next big date the calendar of choler is the poppy season, which going by past years will kick off next month.


IT’S five years this week since Camp Twaddell was abandoned and the gates padlocked. An historic deal had been worked out between camp organisers and nationalist residents to allow an agreed and limited march past Ardoyne shops.

For some reason Squinter got pulled into the impasse early on. Here, to mark (not celebrate) the historic anniversary is Squinter’s piece on the day that flegs became personal...

All Squinter did was highlight a fact. And that fact was that one weekend recently when Squinter visited the Saturday Woodvale protest the numbers were nowhere near the “thousands” reported on the BBC website.

It seems that hit a nerve in South Belfast, for last week a delegation from South Belfast triumphantly – if rather belatedly – marched to the protest camp at Twaddell Avenue to put up the above banner, which reads  ‘South Belfast Supports Loyal Orders. This one’s for you Squinter’.


Squinter’s attention was brought to the banner by a tweet from the South Belfast PUP on Thursday evening. Strange kind of political party that goes around tweeting pictures of interface banners, but chacun à son goût, as they say in Ulster Scots. Squinter spent an uncomfortable night wondering if the erection of the banner by person or persons unknown was some kind of sinister message, and so he pushed the settee up against the hall door, set a trip wire attached to empty tins on the back step and turned the Jack Russell loose to patrol the perimeter. And then he sat in the darkness with a hurley stick in one hand and an assortment of miraculous medals in the other while the clock on the mantelpiece ticked away the minutes and the hours till daybreak. And as the first slivers of Orange light peeked through the dark clouds in the east, Squinter knew that his first job had to be to establish whether in fact a banner had been erected, or whether this was some kind of online loyalist lark.

A mixture of butterflies and adrenalin meant that Squinter couldn’t face a hearty breakfast, and so after a cup of milky tea and half a round of dry toast, Squinter got in the car and set off for his date with destiny. As he made his way down the upper Springfield towards the West Circular, the loyalists on Nolan were sounding even angrier than they normally do and for a second Squinter’s resolve faltered, remembering what had happened to his old pal the Lord Mayor when he visited the area with a large escort of Trevors. What dread fate lay in store for Squinter, alone and unprotected? In search of relief, he turned the station to U105 but Frank Mitchell’s loyalists were positively frothing at the mouth, so Squinter switched to Classic FM only to find The Flight of the Valkyries playing. And so it was that the final approach to Twaddell Avenue was made in radio silence.

And there it was, just as it had been pictured on Twitter, in all its loyal glory, on the fences of the protest camp beside a sign ordering that no drink was to be drunk in the camp by order of the ‘Camp Committee’ (Graham Norton and Julian Clary?). Two middle-aged women and a bewildered looking youth were the occupants of the camp, so Squinter decided to take his courage in his hands and have a chat with them, his decision being copperfastened by the fact that four cops were standing on the other side of the road. Parking the car on the Woodvale Road, Squinter was able to approach the camp on foot from a Proddy direction. Here’s a tape recording of the conversation that took place.

Squinter: Alright, folks, how’s it going?
Female 1: Sound as a pound.
Squinter: Who’s that Squinter bloke on thon banner?
Female 2: Dunno. Some Fenian, Ah suppose.
Female 1: I heard he works for the Andytown News an’ he makes fun of our flegs an’ all.
Youth: Aye, Ah saw him on Twitter. He’s about as funny as phlegm.
Squinter: What was he saying about you? Sorry, yiz?
Female 2: He said our ones in Sandy Row cudn’t bather their ballix comin’ over here for till support iz.
Youth: Aye, an’ he was crackin’ on hardly anybody comes till lis here camp.
Squinter: Is there usually more here?
Female 1: Aye, ’er wuz eight of iz here last night, so ’er wuz.
Youth: I saw a picture of that Squinter walt on the internet, so Ah did.
Female 2: Waddiz he luk like?
Youth: Tall, good lukkin’, well-dressed. Bit like ’at bloke ’er, believe it or nat.
Female 1: Where’d ’e go?
Female 2: Ah dunno.
Youth: Is that him staunin’ over ’er beside le peelers?