GERRY ADAMS: High hopes of satisfaction go up in smoke 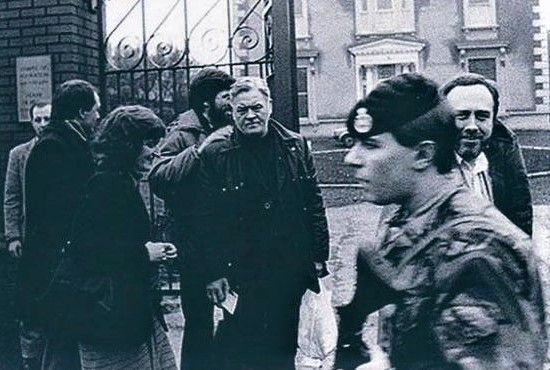 FLASHBACK: Bingo Campbell eyeballs a British soldier near the Sinn Féin office on the Falls Road

MY recollections last week of my successful battle against the dreaded nicotine sparked, pardon the pun, similar recollections from some of my friends.

Richard, who never smoked, reminded me of our old comrade Joe ‘Bingo’ Campbell. Bingo used to work in the old Sinn Féin office at the corner of Sevastopol Street. In those days the office was little more than a slum. It housed a number of projects including the Republican Press Centre, the POW Department, An Phoblacht/Republican News and the transport hub for buses taking prisoners’ families to visits in Long Kesh, Armagh and Portlaoise and other jails.

The building was regularly raided. The British Army would wait outside stopping people going in and out, harassing and abusing everyone. It was the target for bomb and gun attacks, including one by a death squad using an RPG rocket launcher. In one attack in 1992 three folks in the advice centre were killed: Pat McBride, Paddy Loughran and Michael O’Dwyer. Pat Wilson and Nora Larkin were injured.

During these turbulent years Bingo did all the odd jobs about the building. He collected and posted mail, emptied the bins, went for messages, kept an eye on British Army patrols. He was a big man with a ruddy complexion. He was also a very good singer. He used to do a fine rendition of The Bonny Boy in the old Felons in Milltown.

Anyway, as I mention above, Bingo would do messages for the rest of us. One day during one of my efforts to stop smoking I had a horrific urge for a cigarette. At that time for no good reason I would smoke an occasional cigar instead of cigarettes. I suppose in my nuttiness I thought one cigar was better than a few cigarettes. On the day in question I had stubbornly resisted the temptation to have a smoke but eventually I could stick it no longer. I was relieved when Bingo made his way up the stairs to where I was working to tell me he was going to the shop. He asked me if I wanted anything.

“Thanks, Joe,” I said to him, giving him some money, “would you get me a Hamlet?”
“No bother,” Bingo told me cheerfully, and away he went while I went back to my desk to do whatever I was doing.

Every time I heard a footstep on the stairs I thought it was Bingo. Those of you who have never smoked will probably not fully understand the agony I was going through. Having crossed the line and given in now all I could think of was the Hamlet Bingo was going to present to me when he got back. If ever he got back.

A Hamlet, by the way, is a small cigar. They used to be very popular. Their advertising slogan was ‘Happiness is a Cigar Called Hamlet’. Now that I had broken and given in to the nicotine the desire for a Hamlet was pure torture. I paced the floor of our very small office waiting for Bingo to arrive back with my nicotine fix. Minutes slowly ticked by. No sign of Bingo. A half hour later still no Bingo. An hour slipped away as my craving for a smoke became hysterical.

Every time I heard a footstep on the stairs I thought it was Bingo. Those of you who have never smoked will probably not fully understand the agony I was going through. Having crossed the line and given in now all I could think of was the Hamlet Bingo was going to present to me when he got back. If ever he got back.

Maybe he’s had an accident, I fretted. Maybe the Brits had stopped him. Maybe I would never get my smoke. Eventually just when I had almost given up I heard Bingo on the stairs. “I’m sorry for being so long,” he guldered up to me before making his way upwards.

I stood up eagerly and expectantly to greet him. He handed me a hamburger.

“‘I’ve been everywhere up and down the road,” he exclaimed. “I can’t get an omelette anywhere so I got you a burger instead.”

SIX years ago on June 23, 2016, the Brexit referendum was passed by a narrow majority. In England and Wales the majority voted to leave the EU. In the North and in Scotland the majority of people voted to remain in the EU. The democratic vote of the people of the North and of Scotland was ignored.

The Protocol keeps the North of Ireland in the European Single Market for goods. This has resulted in a customs border in the Irish Sea and a deepening crisis between the EU and the British Government. The DUP is blocking the formation of the Executive unless everyone else concedes to their demand that the Protocol is scrapped.

Almost every day a new claim, a new accusation of blame or a new threat, emerges as a result of Brexit.

Consequently, I thought it might be useful to remind us of some of the core facts around an issue which has the potential of collapsing the Good Friday Agreement.

My list is far from exhaustive or exclusive.
• In the June 2016 Brexit referendum 56 per cent of the population of the North voted to remain in the EU.
• In 2018 Boris Johnson told a jubilant DUP conference that no British Conservative government could or should sign up to any agreement requiring any sort of frontier within the UK borders.
• In October 2019 Johnson did exactly that when he negotiated the Withdrawal Agreement and Protocol with the EU.
• The Tories are for withdrawing from the European Court of Justice (ECJ) and are also committed to withdrawing from the European Convention on Human Rights.
• Several weeks ago on 13 June the Johnson government published its Protocol Bill. 15 out of 26 clauses provide Ministers with the power to make "any provision the Minister considers appropriate.”
• Effectively the British are unilaterally tearing up an international treaty they negotiated.
• The British claim that the Protocol undermines the Good Friday Agreement is bogus.
• It is the British Government’s threat to withdraw from the European Convention on Human Rights that is a direct attack on the GFA.
• Data from the Office for National Statistics reveals that the Protocol has ensured that the North’s economy is outperforming Scotland, Wales and England.
• The Scottish First Minister Nicola Sturgeon recently said that “…if I could get a Protocol that would allow Scotland to continue to trade freely across the single market, I’d take that in a heartbeat...”
• The majority of citizens in the North in the Assembly election voted for parties that support the Protocol.
• The majority of MLAs elected support the Protocol.
• The EU and the USA (a guarantor of the Good Friday Agreement) have made clear their determination to defend the Agreement.

In the midst of this deepening crisis it is important to remember that in 2017 the EU said that in the context of a united Ireland all of Ireland would automatically become a full member of the EU.

In 2007 when Ian Paisley and Martin McGuinness took up their roles as First and deputy First Minister their first joint act was to send a letter to the British Secretary of State to vacate Stormont Castle. As Ian Paisley said to Martin at the time: “We don’t need an Englishman to rule us.”

He was right. We have the intelligence and the wit to rule ourselves and to build a better future for all our people and we can, if the people so decide, do that within the European Union.

IS PAUL IN THE PARK A PIPE DREAM?

PAUL McCartney’s opening song for his amazing Glastonbury set on Saturday night was ‘Can’t Buy Me Love’. As the opening bars began to play the years rolled back for this Beatles fan and I was a teenager again listening to their latest hit on the radio.

Paul McCartney’s two-and-a-half-hour set at Glastonbury was a masterclass in song writing and musicality. The huge audience enthusiastically sang along. Whether to ‘Ob-La-Di Ob-La-Da’ or ‘Get Back’ or ‘Lady Madonna’ or ‘Let It Be’ or ‘Hey, Jude’. The concert was a joy to watch and to sing along with at home. At least nine Beatles songs. And then there was Dave Grohl of the Foo Fighters and another of my favourite musicians, Bruce Springsteen, on stage rocking with McCartney and his outstanding group of musicians.

It was a remarkable evening of nostalgia and incredible music by one of the great songwriters of any generation. Wouldn’t it be great if Féile an Phobal could persuade Paul McCartney to play the Falls Park?