How Concern helps the business of survival 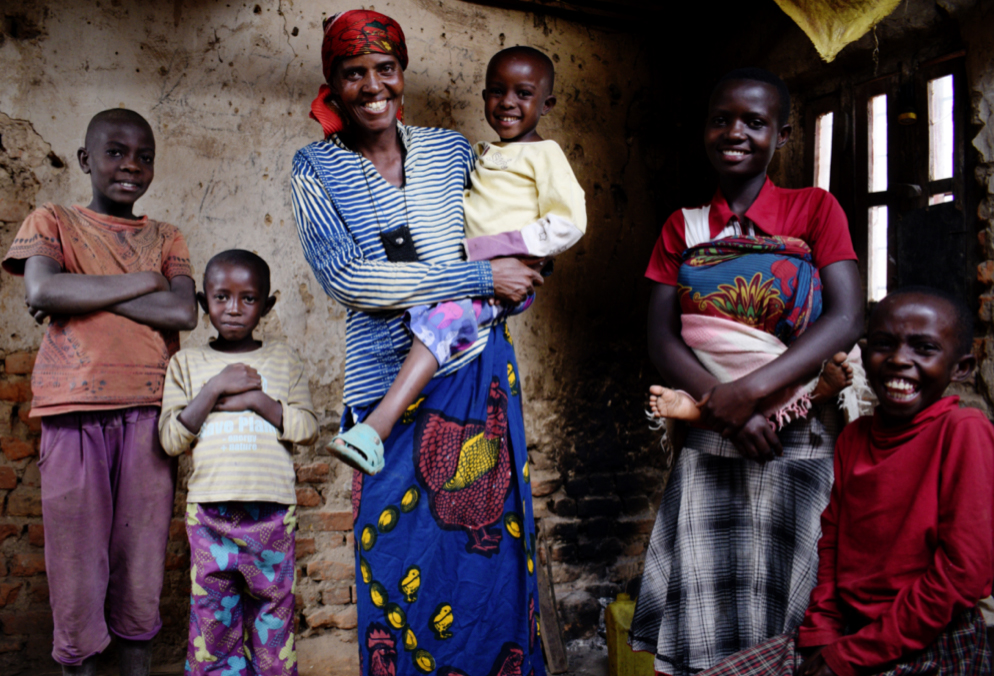 NEW HOPE: Violette Bukeyeneza in her dilapidated home with children Alain (11), Idrissa (7), Rachid (5), Amida (13) and Seraphine (10). With the help of Concern Violette has started a small business selling banana juice twice a week – and has earned enough to buy a goat; she now has plans to convert her front room into a small grocery shop when her home renovation is completed

AS WELL as dealing with mothers who call into her clinic, Concern-supported Community Health Worker Venerande Miburo visits over 200 families monthly, primarily to check on their nutrition status, but of course the visits are a chance for much else to be discussed – professionally and socially.

Take Renate Kamutako, a mother-of-nine who’s under the care of a Concern CHW. As is so often the case, she sometimes doesn’t have money for food, either because she can’t get casual work or what little money she has has been spent on some family emergency. But what she does have – and what she has all the time – is a kitchen garden, which she built after receiving advice and training from her CHW. It’s a clever concept because it’s self-sustaining and is designed to take up as little land as possible, a vital consideration where land rental is a massive drain on family incomes. It’s a small, circular, terraced garden centred by a pipe which allows water to cascade down and around.

“It’s a simple and easy way to benefit my family,” she says as she waters her vegetables – onions and amaranth (or lenga-lenga, a highly nutritious spinach-like leaf). “The garden makes our meals more nutritious. Even if we don’t have money we have vegetables.”

Not far from Renate lives Marie-Chantal Kwizera, a young mother with three children who is quite literally a shining example to others. Marie-Chantal is one of Concern’s ‘Mamans Lumières’ (Light Mothers) – parents trained to give vital lessons on good nutrition and breastfeeding and food preparation and hygiene. After showing us round her kitchen garden, she takes us to the back of her house to show us a device that’s central to the crucial work of preventing sickness and disease by promoting basic hygiene procedures. Near the door of her outside toilet is a ‘tip-tap’ – a simple and ingenious way of bringing running water to a region that doesn’t have pipes, never mind taps. A major difficulty, she tells us, is that because water is stored in large, unwieldy jerry cans, the task of washing your hands after visiting the toilet is so tricky that it is often overlooked. With the tip-tap, water is poured from the jerry can into a smaller jug, which is suspended by a string from a wooden frame. By means of a wooden foot treadle and string, the jug of water is tipped to create a steady stream of water – add a bar of soap on a rope and the job’s a good ‘un.

Madeleine Nahimana was a young mother with three children when she was widowed in 1993. Now 47, her life over the past quarter-century has been a struggle to survive. The Concern Graduation Programme has allowed her to look beyond the next meal and the optimism in her voice was clear, even though I couldn’t understand a word she said. When the first cash transfer came, she knew what she wanted to do.

As far as I could see, the business consists of a selection of plastic barrels of varying height and capacity. The small room in which the beer is fermenting smells the way the Glen Road brewery used to smell when I was a boy – yeasty, malty, or, in this case, maizey.

“I was as poor as a mouse,” she went on. “I wanted to buy the business but first I had to buy clothes and a hoe. Also food and soap. With the second transfer I bought more clothes and three chickens, a basin and some plates. Then I bought the maize beer items from the man who was closing down.”

With three batches of maize beer a week to sell and with income from occasional casual work too, Madeleine’s life is no longer just a struggle. As two of her grandchildren tugged at her shirt she said: “I’m lucky to have the support of the programme. It gives me the strength to continue. We’re eating better – vegetables, fish, cassava – and I feel proud and comfortable. With the money from the next transfer I’m going to start to build a new house.”

After another bucket shower next morning, it’s farewell to the Rama Hotel and we’re off on the three-hour drive to the province of Cibitoke, through tea plantations and banana forests, past small villages where children run alongside the vehicle, pointing and calling: “Mzungu, mzungu!” (“White guy, white guy!”). Tradespeople and barbecued food vendors look up from their outdoor work and watch the Concern Toyotas until we’re out of view; when we stop, fruit and vegetable sellers vie to press their bags and trays to the vehicle windows.

From Kabere Hill we can see and hear a storm brewing in the mountains on the border of Burundi and Rwanda. The sky’s a thick duvet of slate-grey cloud and a low, bass rumble brings the first spits of rain.

Violette Bukeyeneza’s house is a mess, there’s no getting away from it. The roof – where it exists – is a mixture of improvised canopy and rusted iron sheeting that won’t see out another rainy season. The earth floor and the crumbling brickwork smell of the damp left by the last downpour. But Violette and her 11 children aren’t particularly worried, because they know they’re living on a building site and the keys to a better home will soon be delivered.

After being selected to be part of Concern’s Graduation programme three months ago, renovation and extension work has begun on her dilapidated property. She’s also started a small business selling banana juice twice a week – and has earned enough to buy a goat. She now has plans to convert her front room into a small grocery shop.

“The house just collapsed,” Violette tells us as we head inside to seek shelter from the ever-heavier rain. The thunder growls louder, lightning flashes somewhere in the border mountains that we can no longer see, the day turns almost to night in a minute.

“The house was just about destroyed and there were cracks everywhere in what remained. With my first cash transfers I paid a man to do work.

“I bought six iron sheets and I gave some cash to the savings group. I need 18 more sheets. The man began work in July but he doesn’t know when he’ll finish. The house is being widened and lengthened, we’ll have a sitting room and three bedrooms.”

A blast of wind sends a curtain of horizontal rain through the empty door and window frames and a pile of newly-laid bricks crashes to the ground. The wind flings cement and brick dust from the walls into our eyes and we retreat to the only fully protected room in the house – the bedroom where all the family sleeps. Violette’s frightened goat is brought in too and butts around our legs as we speak by the light of mobile phones.

“I’m going to open a small shop when the work is finished,” she goes on. “Before I had just casual work and very little money – no uniforms for school. Thanks to the Graduation Programme we eat three times a day – beans, vegetables and maize. I have happy and healthy children now.”