Husband tells of his final promise to dying wife 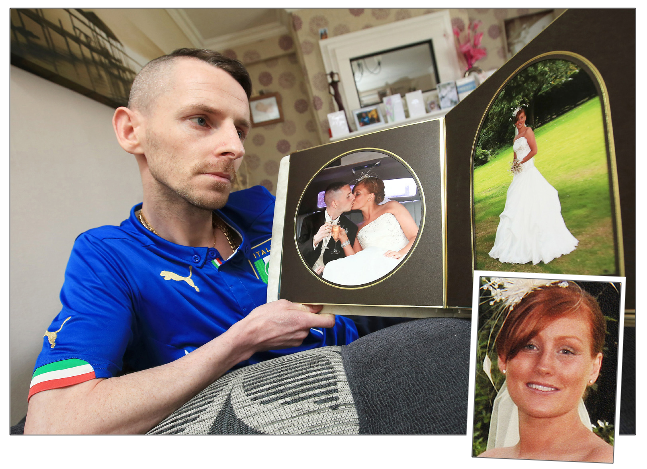 Tommy O’Hara at the family’s Springhill home and, inset, Arlene

THE devastated husband of tragic Belfast mother-of-two Arlene O’Hara has spoken of his final promise to the 31-year-old just before she passed away in hospital in England.

Speaking from their family home in Springhill Avenue, Tommy O’Hara said on the day she passed away he told his wife he’d look after their two young boys.

He told Daily Belfast News that Arlene complained of flu-like symptoms a fortnight ago and was admitted to the Royal Victoria Hospital on Wednesday, March 18.

“She was advised to go home and rest,” he said. “She was told she had a viral infection but I couldn’t wake her on the Friday and she was admitted to the Royal again.”

Arlene’s sister, Seanine Holmes, said when Arlene was brought to hospital for the second time she was unconscious and her condition was rapidly deteriorating.

“Her organs were shutting down and she was put on life support,” she said.

“The doctors realised her liver was shutting down, it was failing along with the rest of her organs and the hope was to get her a liver transplant.

“She was airlifted to King’s College in London for a liver transplant but when the doctors investigated the measure of pressure on her brain it was so great, and she died of a haemorrhage last Wednesday.”

The family are hoping to have Arlene’s remains flown back from London today (Thursday) to enable them to prepare for a Saturday burial.

Seanine said the support of the local community for the family since news broke of the tragedy has been “phenomenal”.

“There has been incredible support flooding in for us from the community and it has kept us together, to be quite honest,” she said.

Seanine described her sister, who worked in the Park Centre Dunnes Stores outlet for the past ten years, as “such a beautiful girl”, adding, “she was always smiling and lived for her two boys, Aaron and Thomas.”

She went on: “We are just waiting on her to come home now so that we can get through this grieving process ourselves. We are in limbo at the minute but I can’t stress enough how important the support of the community has been to us.”

Opening up their wedding album to the Andersonstown News, heartbroken Tommy said he wanted to say thank you for the generosity of local people who donated to a fund set up to bring the family to the hospital in England.

“People have been just brilliant,” he said. “Even people in England have sent well wishes. My family have been fantastic, my brother has been my rock in this. The support has been unbelievable.

“I never thought that after Arlene got sick that my wife was going to be dead. I promised her on her last day I was going to look after the boys. I can’t let her down.”

Local Sinn Féin Councillor Steven Corr, who has been supporting the family during their ordeal, said: “Arlene and Tommy and kids are a very well known family within the area, having grown up and made their family home in Springhill.

“I’d also like to say a massive thank you for all the financial support that has been offered since the loss of Arlene. The family were bowled over by people’s generosity, but that generosity was an illustration of how popular and respected this young family is.

“I know the family intend to make a donation to the ICU in the Royal Victoria Hospital. This is a unique circumstance in that Arlene has passed but her remains are not home yet with her loved ones. We need to give the family time and space to finalise all those arrangements at this most tragic of times in this young family’s life.

“No-one can imagine what they are going through.”