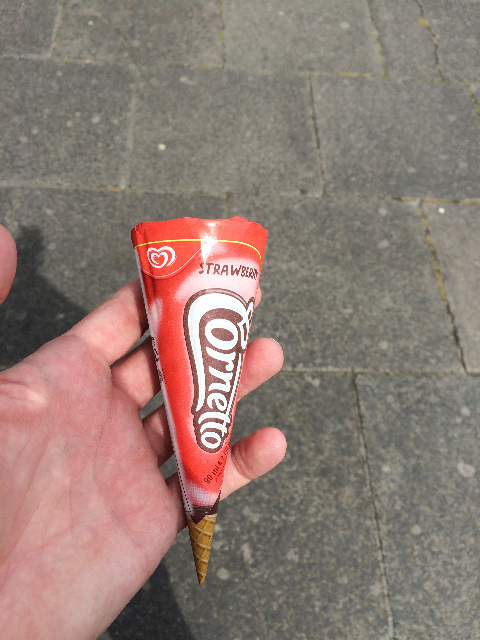 COLD COMFORT: At least you won't get too fat eating one of these

MEANWHILE, in the searing heat of Tuesday, Squinter decided an ice cream was in order as the mercury crept towards 30 degrees. And so in a Spar in Lisburn (again, don’t ask) he extricated this little fella from the chill box. Now it’s a very, very long time since Squinter had a Cornetto.

Veda and baps are a constant factor in his life, but last time he had one of these things the Pope was an altar boy, Moby Dick was a tadpole, the bow and arrow was a secret weapon and lines like this were young and funny.

But even though it’s a long time ago, Squinter remembers a Cornetto was never this size. To get the full dramatic effect, hold the thumb and pinkie of one hand to just over the diagonal width of the four fingers of the others and then hold the first hand up. Yip, you better believe it – that’s the size of a Cornetto today.

It’s suggested that people think things are smaller than when they were kids because the hands get bigger as one gets older and so the perspective changes. Lot of boolers, if you ask Squinter, and indeed another chat with Professor Google reveals that the Cornetto has indeed been reduced in size over the years. The manufacturer, by the way, is Unilever, which Squinter had always associated with deodorant and washing powder.

Which explains the new Cornetto taste.