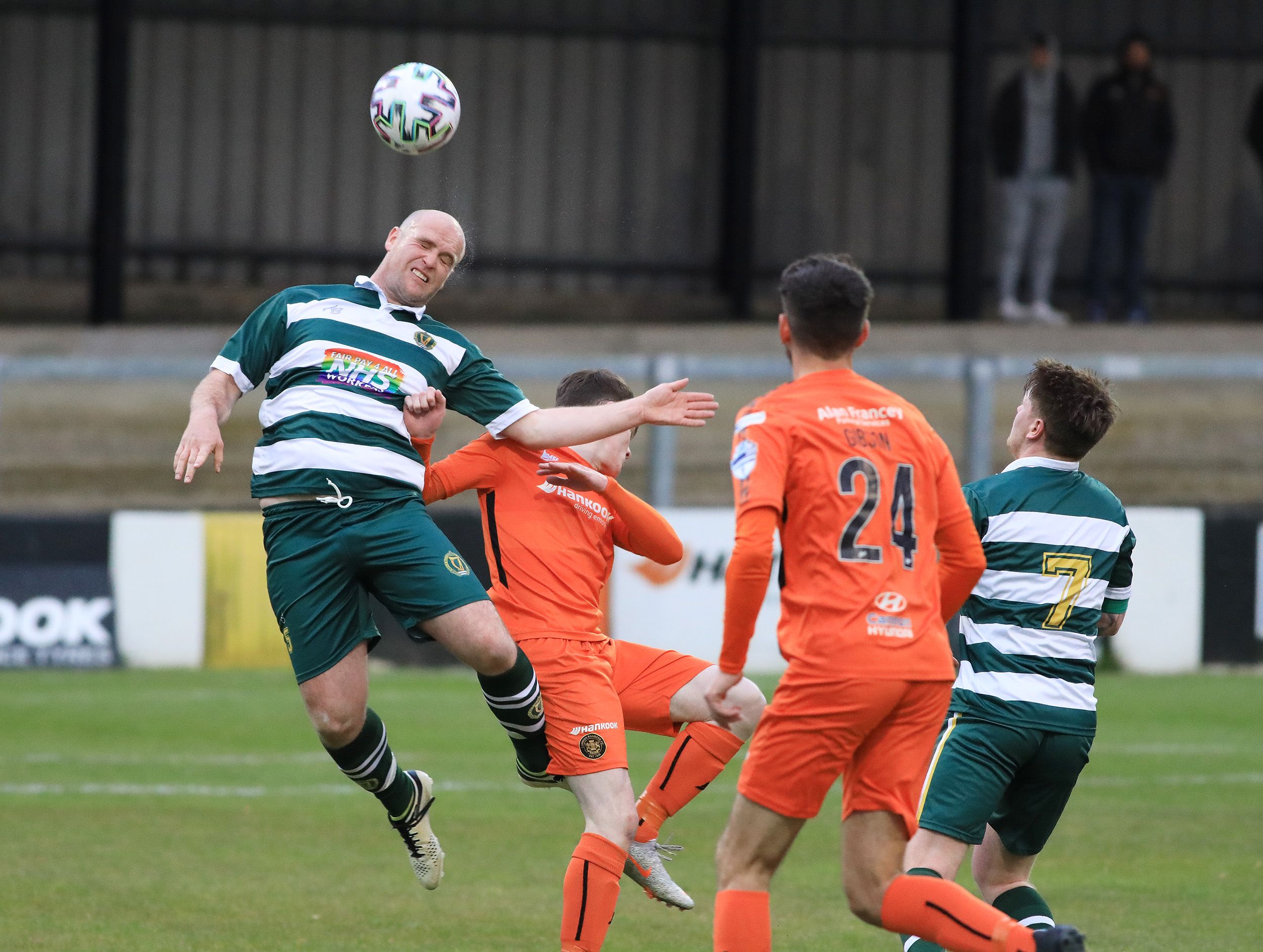 A GLANCE at the final score of this Irish Cup Round One clash at the Loughshore Hotel Arena would suggest a routine win for the Irish Premiership's Carrick Rangers over Ballymena & Provincial League side Belfast Celtic, but in the end the hosts had to survive some scary moments before finally putting the tie to bed in the final 20 minutes.

It seemed Carrick would enjoy a comfortable night when they hit the front after just four minutes through Michael Smith, but were living on their nerves in the second period as Belfast Celtic carved out some great opportunities with a combination of missed chances and good goalkeeping keeping the hosts in front.

It took a Caolan Loughran penalty on 70 minutes to give Niall Currie's side some breathing space and they put a gloss on their night's work with Kurtis Forsythe adding a third in the dying embers.

Perhaps the final score was harsh on the visitors who put in a huge shift and considering this was their first competitive action since autumn, their efforts and fitness levels were hugely impressive.

"We were still missing four or five players there, but I just want to put it on record how proud I am of them," said player-manager Stephen McAlorum who was on the pitch for 70 minutes of the game.

"They came in under the conditions they had to come into and play away; four weeks training twice-a-week but the fitness levels were perfect.

"That just shows how well they had been looking after themselves outside of football so I'm just proud of them and hope they can stick together going into the league campaign and get the club promoted."

With a stiff breeze at their backs, the hosts made the perfect start as just four minutes in, Forsythe clipped in an excellent ball from deep in the right corner and Smith got nipped in at the front post to finish to the net.

Carrick thought they had doubled their lead three minutes later when again, Forsythe was the architect as his cross from the right dropped to Corey McMullan who shot across Padraig Nugent in the Belfast Celtic goal. It appeared the shot was creeping into the corner of the net and Smith made sure with the final touch, but had done so in an offside position.

Carrick were certainly on top for the vast majority of the opening half, but they seemed to relax a little as while they had plenty of the ball, they created precious little until the 35th minute when Corey McMullan put Jordan Jenkins through on goal, but inexplicably he failed to hit the target from just yards out with the goal at his mercy.

The visitors steadied after their slow start and began two look a little more comfortable as they got up to the pace of the game and played some decent stuff out from the back. However, they were making little headway in attack until the final minute of the half when a long ball into the danger area from Stephen Tully was nodded down by Shane McKernan and while Carrick goalkeeper Aaron Hogg got down to smother, he fumbled with Kevin Lynch lurking but Hogg managed to gather at the second attempt as Carrick went in at the break leading 1-0.

If the first half was lacking in terms of goalmouth action, the second proved much more entertaining as the visitors set about trying to get back on terms and sounded an early warning when Emmett Templeton fired over five minutes in.

Belfast Celtic goalkeeper Padraig Nugent then gathered at the second attempt when a Michael Smith cross took a slight deflection, but the visitors began to grow in confidence and had most of the play for the next 20 minutes with some huge chances to level through Shane McKernan.

On 60 minutes, the attacker found himself in on goal, but lost his balance just as about to pull the trigger with the ball scrambled away from danger, although a minute later at the other end, Jordan Jenkins cut out his right boot and lashed a rasping shot that just cleared the bar.

McKernan then had another big chance on 64 minutes as a Joshua Lynch free-kick was whipped in from deep on the left with the headed clearance falling to Stephen Tully who lofted the ball back into the danger area over his head and right onto the boot of McKernan but the effort was too high with the goal at his mercy.

A minute later, he had another effort, this time more difficult from the edge of the area but connected brilliantly with the ball arrowing into the roof of the net only for Hogg's outstretched fingertips diverting it inches over the bar.

However, the pendulum decisively turned for Carrick Rangers on 70 minutes as Kurtis Forsythe made a strong burst into the penalty area but was taken down for a penalty that was tucked away by Caolan Loughran.

The West Belfast outfit almost pulled one back moments later rather fortuitously when Joshua Lynch's deep free-kick evaded everyone and dropped just past the goal, but this would prove to be their final chance.

Instead, Carrick appeared to have the spring in their step against their tiring opponents with Daniel Kelly's shot blocked out for a corner that was played in and Loughran thundered a header just over.

The third goal did arrive four minutes from time and fittingly, it came for man-of-the-match Forsythe when substitute Lloyd Anderson got in behind the defence on the left and played an inviting ball across goal with the full-back powering his shot high into the net to seal Carrick's place in the next round.

"Big Shane was super the whole night and had a great chance, but it's just one of those things," McAlorum added.

"There was no faulting anyone. We asked them to go out and give us everything and they did that, so I'm proud as punch of the boys."