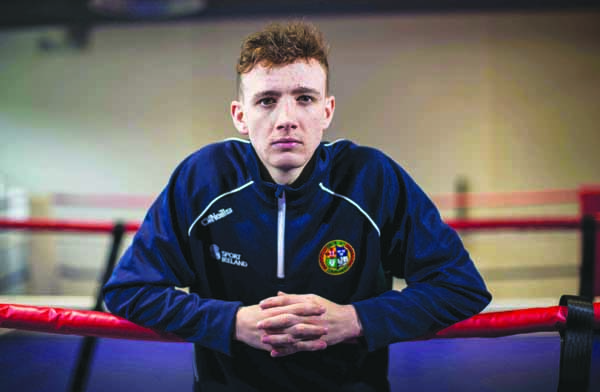 IT was a case of double delight for Brendan Irvine last week as he had his ticket stamped for next month’s Olympic qualifier and was named captain of the 13-strong Irish team.

Irvine is the only survivor from the Rio Olympics so was a natural choice to lead the team, but also admitted there was a sense of relief to make the squad having endured an horrendous 18 months with injury.

The Glencolin man was forced to sit out all of 2019 as he initially was recovering from a thumb injury, but then suffered a broken foot in training that meant he was unable to compete at the European Games and then the National Elites.

However, he returned to action in Hungary recently when dropping a split decision to Botswana's Mohammed Rajab, but said he was just happy to get back in action and shake off some of the ring rust that had developed.

“It was amazing to just be selected, but to be named team captain was something else. It was really unexpected,” he said.

“Bernard (Dunne, Irish High Performance Director) said to me that I’ve been there, done I and know what it’s like. It there’s anything I can do to help the team I’ll always do it.

“I enjoyed being back in the ring again the other week. It was great to just be back after the shocking year I’ve had.

“I couldn’t have picked a better opponent to fight because he was tough, fit and was there to fight. It was a good test of my fitness and to see if the foot would hold up and it did, so I’ve the confidence in it now.

“Before, I wasn’t sure how it would go, but I’m feeling good and looking forward to next month.”

The Irish team left for Assisi, Italy on Monday to take part in a two-week camp ahead of the Olympic qualifier that will take place at London’s Copper Box Arena from March 13-24.

There are 77 places for the Games available next month - 50 for men and 27 for women - across the eight male and five female weight classes with those who don't stamp their ticket for Tokyo next month afforded a second chance in Paris this summer.

However, Irvine naturally wants to get the job done at the first time of asking and ensure he has plenty of time to get ready for Olympics.

“It also gives you more time to focus on potential opponents as you know who has qualified, so you definitely want to get it done now.

“The last time you could have qualified from the World Championships and get it done early, but that doesn’t happen very often. Boxing always seems to be one of the last to get it all sorted out, so that means there’s no time to be switching off.”

While Irvine is still just 23 years of age, he is vastly experienced having taken part in the Rio Olympics.

The St Paul’s flyweight agrees that having the qualifier so close to home is an advantage to the Irish team and he has urged his steam-mates to go and create their own piece of history as the new breed of Irish boxing.

“It’s just across the water and that will work in our favour as it suits us down to the ground,” he said.

“We’ll probably be getting some people travelling over and that bit of extras support, so it will work out well for us.

“The team is in good spirits and you could see it the other day when the team was announced that everyone was buzzing, so it was great to have it all settled.

“There are some there who don’t know what to expect so this is a big opportunity.

“There are boys and girls here who can go and qualify then win a medal and that will change their life. The Olympics are life changing so these next few weeks and months are crucial. It’s about doing small, simple things right to make things go well.”