'It has been such an honour to be mayor of Belfast' 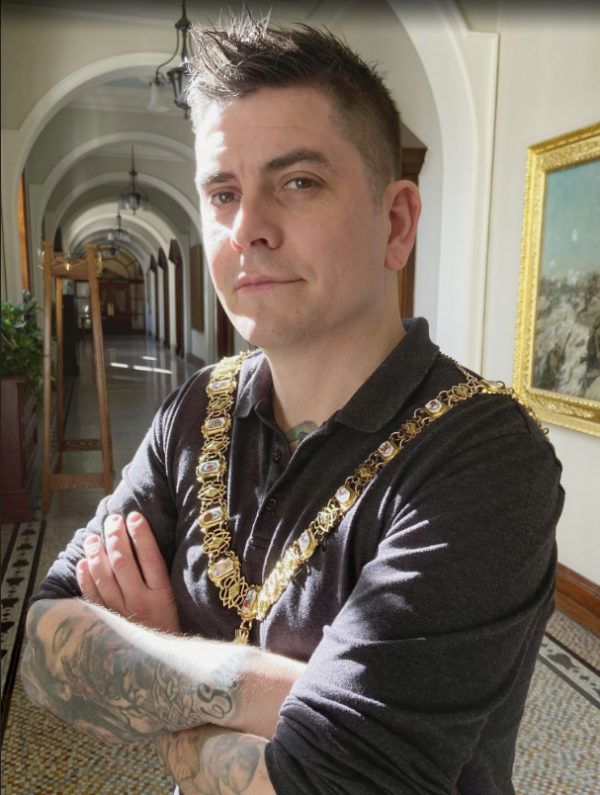 Lord Mayor Danny Baker back in March, just days before the lockdown

NOT sitting comfortably – but rather “walking and talking” during the blistering last week of May – outgoing Lord Mayor Danny Baker tells the Andersonstown News that he got “stuck in” to the role of First Citizen in what has been a whirlwind six months.

The Sinn Féin Colin Councillor took over the mayoral chain when party colleague John Finucane was elected MP for North Belfast back in December.

“I was nervous about it, even becoming a councillor you are putting your head above that parapet, this was another step up the level for me and one that I wasn’t going to turn down," he revealed.

“I didn’t know what to expect but once the being nervous bit went to the side, the excitement kicked in and I just got stuck in, everyone was brilliant with me,” he said.

As a very “hands on type of person” Danny spoke of how that side of his personality helped him meet with different groups and individuals from across the city.

“I enjoy interacting with people, I’m very much a people’s person. I have always found it easy to go into a room to talk to people. Even with the ‘suits’, at business events I was always very open, myself.

“I remember at an event telling a joke about my tie, about my suit. I didn’t even have a suit when I became Mayor. I mean, everyone has a black suit in the wardrobe but I had put on a couple of pounds and I had to go get one.

“It was around Christmas time and thank God the shops were open late. I bought one in a size thinking ‘I’m still slim Jim Danny’, in Marks and Spencer but it was too short and I had to bring it back. It was a case of back out again to make sure I had a suit for the next day. I took it all in my stride, it was a lot of fun,” he laughed.

Danny revealed that he found a letter from “comrade and friend” John Finucane, in the Mayor’s Parlour “wishing me well”.

On the challenges of being Mayor during and throughout the current Covid-19 pandemic, Danny replied: “I was interviewed by the Andersonstown News on March 18, just as lockdown was kicking in. In January we didn’t know what was coming and how our lives would change so dramatically. Taking the decision to cancel the St Patrick’s Day celebrations was a big one, I know that it annoyed other members of council at the time but I think when we look back on it, it will be our collective moment where we saved lives.”

The father-of-three said that a highlight for him as Mayor was doing the honours at the opening of the new Brook Leisure Centre in the heart of Twinbrook.

“It has to be one of the biggest highlights for me. Not only did we have such little investment in the Colin area all those years under Lisburn Council, we were deprived, there is no questions about it. When we moved to Belfast City Council in 2015 we have seen massive investment in the area and across West Belfast.”

He continued: “I went to St Colm’s and I remember looking out the window from the class and where the Brooke centre is now  – it used to be an old field. There were burnt out cars on it, this was the early 90’s, the British army used to land their helicopters on it. My memory of it was always heavy armoured vehicles on it going through the area. To stand in what is now a £15 million investment for my children is testament to how far we have come. We aren’t finished by a long while, I would like to see a health hub and a brand new post-primary built.”

When the chain is handed over to the DUP’s Frank McCoubrey on Monday, the 38-year-old said he will look back with “pride” on the last six months.

“It was such an honour to have the role. I got a lot out of the groups I met, including Down Syndrome support charity Ups and Downs. On a personal level I got a lot out of that meeting, I made friends for life. I welcomed Eimear Smyth’s dad Sean into the parlour as part of Donuts for Donors Day. It was a great event and again, I made another friend for life. Here was a heartbroken father, who had lost his daughter and everyday he is keeping her memory alive and helping others, he is an absolute gentleman.”

“My message is really to our young people out there. I failed my 11-Plus, I had very modest GCSEs, I kept my head down and got my degree later on in life. If I can make it to councillor, to Mayor, doing a job that I love then I say don’t let anyone say to you or tell you that you can’t do it because you can.”

It has been a blast and cannot think of a better setting for our last. Thank you all for the support and of course the amazing Maskeys@PaulMaskeyMP pic.twitter.com/gkiRUt1oUn