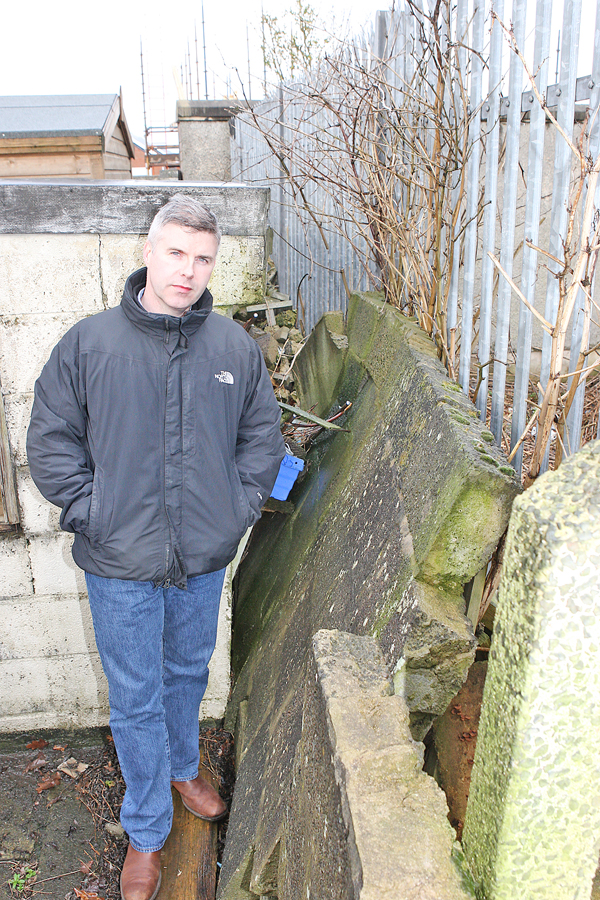 AGGRESSIVE: Cllr Steven Corr surveys the damage to the garden wall with the Japanese Knotweed growing behind

A WHITEROCK resident has been left in limbo as she tries to deal with an infestation of Japanese Knotweed that has taken over her back garden and virtually destroyed any hope of home improvements.

Japanese Knotweed is an aggressive non-native species that has an ability to colonise areas rapidly and exploit weaknesses in structures, pushing up through hard paving surfaces. It forces its way around pipe work and into buildings, dislodging hard features as it grows.

Worryingly, it has also been identified in other parts of West Belfast.

Speaking to the Andersonstown News Sinead O’Neill from Brittons Parade said she has lived in her home for forty-five years and has always been happy there.

“I had no idea about the Knotweed until I had a surveyor call out because I was wanting to get an extension built. I found out it was growing out the back and I’ve pretty much been told that I won’t get planning permission because of it.

“If you cut it you spread it. I’ve paid £1,500 for a surveyor and now building control and planning have refused me. I wanted an extension built and my neighbour was trying to put in an attic conversion and her surveyor told her the same thing. It has completely destroyed my neighbour’s wall because it’s such an aggressive species of plant.”

Councillor Steven Corr said as well as these two cases there is also a case in Dermot Hill that he is assisting the home owner with. He said he is also aware of properties in Beechmount Drive and Springfield Road which have reported issues with Knotweed.

“It’s stopping people from selling their homes, estate agents won’t offer mortgages because of it and insurers won’t touch it either.

“There’s no legislation around this, no one has responsibility for it. There needs to be something put in place. If there was graffiti on a property the Council would come out and clean it and bill the landowner, but nothing can be done in this case. It’s being bandied around Stormont and the councils and no one can deal with it, it’s all over the place.”

Cllr Corr added: “I would like to convene a meeting with myself, residents, the environment agency, the Belfast Hills Partnership and the bio diversity officer from City Council. We need to get everyone in a room and work something out. Someone needs to take responsibility and this needs to be dealt with properly. People’s mortgages and property value are being affected as are their hopes of carrying out home improvements.”

Dr Jim Bradley of the Belfast Hills Partnership said: “Japanese Knotweed is one of the most persistent and prolific alien invasive plants we have to deal with in the Belfast Hills. People do get very concerned when they find it on their property but they should realise it can be controlled by herbicide treatment applied over a number of summers.

“If it needs to be got rid of quickly you can dig it up but it's a very specialised and extremely expensive job – you need to go down five metres to get all the roots and then disposal in specialist waste sites is very costly.

“The one thing not to do is just let it spread and do nothing – it's definitely a case of a stitch in time. Another important point is that even a scrap of root or stalk can establish so never dump Japanese knotweed material off your site – it's illegal to spread this noxious weed.”