Joseph and Mary to be laid to rest together 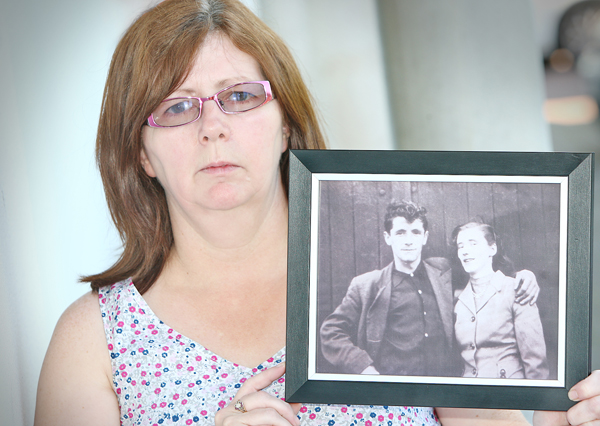 REUNITED: Janet Donnelly with a treasured portrait of her mum and dad, Joseph and Mary. The double burial today will be a bittersweet affair for the family

THE daughter of Ballymurphy Massacre victim Joseph Murphy has spoken of her mixed emotions that her beloved parents will be laid to rest together today (Thursday).

Mother-of-12 Mary Ellen Murphy passed away on August 22 – exactly 45 years to the day that her husband Joseph died from gunshot wounds he received during the Ballymurphy Massacre.

In October last year Joseph Murphy’s remains were exhumed from the City Cemetery, on the back of his dying claims that he had been shot a second time while he lay wounded in Henry Taggart British army base after the Ballymurphy Massacre that claimed the lives of 11 innocent people from the area over three days in August 1971. Within days of the exhumation a bullet was found lodged in his body, vindicating his claims.

Mrs Murphy was diagnosed with bowel cancer just four months ago. She passed away on Monday at home surrounded by her loving family.

Speaking to the Andersonstown News, Mr and Mrs Murphy’s daughter, Janet Donnelly, said that the family had found out just yesterday morning  (Wednesday) that the Coroner’s Office were releasing their father’s remains to them.

“We had been back and forth to them, informing them that mummy was very ill and we wanted to have our daddy reinterred before anything happened to mummy,” she said.

“The original plan was to have daddy buried and for our mummy to be there. Our mother was a woman of great faith. When our daddy’s body was exhumed in October she insisted that there was a priest present and that there were prayers at the graveside.  She wanted him to have a proper funeral when the time came for him to be reburied. Little did we know that he would be waiting for her in the chapel 45 years from the day of his original funeral.”

Relatives of the murdered man took the decision to apply for the exhumation on the back of their dying dad’s claim that he had been shot again by the British army while he lay wounded in the Henry Taggart base.

Janet said: “The Coroner’s Office have been so helpful, they rang to try and get preliminary reports sent from Leeds. We weren’t going to rebury him unless we were completely happy with everything and the Coroner was aware of this.

“Daddy’s remains had been taken to Leeds so they could conduct a microscopic scan on the bone. The Coroner rang this morning to say the report had been completed and that we could have his remains back – we are so thankful to them.”

After her husband’s death Mary Ellen Murphy was left to raise nine children alone – three of her children have already passed away. She remained in the same house in Ballymurphy Parade until her own death.

“After daddy passed away our mummy raised us on her own. She did what a lot of women back then had to do: she just got on with it, she worked non-stop. She had a house shop, she sold candy apples and she took any work she could get, that’s what people did back then. Her faith carried her through those hard years, she said her Rosary every day.

“It is bittersweet – on the one hand we are happy but we know Thursday is going to be so emotional. We’re happy because she always wanted to see him buried again and we promised her it would happen.”

Janet says all the Ballymurphy families know the truth about their loved ones, but it’s vital that the truth is put on record.

“We want an inquiry, we need for the rest of the world to know what happened to the victims of the Ballymurphy Massacre.  It’s about justice. In years to come when people look back on history we want it stated clearly in black and white that our loved ones were innocent victims.

“Now that mummy has passed away it’s even more important for the inquests to be heard as our witnesses are dying – Joseph Corr also passed away recently. There’s money sitting there for inquests, it needs to be released.”

The funeral and reinterment of Mary Ellen and Joseph Murphy will take place today (Thursday)  in the City Cemetery after noon Requiem Mass in Corpus Christi church.

Janet said: “Daddy’s coffin will be waiting on mummy’s in Corpus Christi chapel, where his original Funeral Mass was 45 years ago to the exact date. We are absolutely delighted that our parents are together again.”