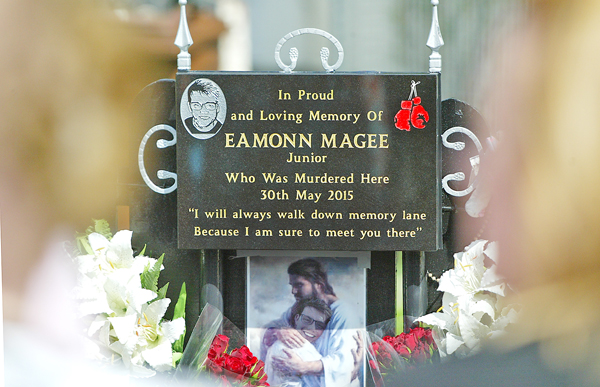 A jury has been sworn in for the trial of a man accused of murdering 22-year-old West Belfast boxer Eamonn Magee Jnr.
The Ulster University Engineering student was stabbed to death in Summerhill Park in the Twinbrook estate on May 30 last year.

Orhan Koca, a 33-year-old Turkish national of no fixed abode, is accused of murdering of Mr Magee. He has denied the charge.
The judge at jury at Craigavon Crown Court, sitting in Belfast, told the jury that the trial could last up to four weeks.
The judge also gave the jury, made up of seven women and five men, a brief background of the incident.
He told them: “This case is about the alleged murder of Eamonn Magee Jnr on May 30 2015 in the Summerhill Drive/Park area in Twinbrook in West Belfast.
“Eamonn Magee was at the home of his girlfriend Courtney Ward in Summerhill Drive. Courtney Ward was the wife of the defendant, and they had recently separated.
“The defendant was born in Turkey and he and Courtney Ward met and married there before they moved together to live in Northern Ireland.”
The jury was also told that the deceased was the son of “well-known professional boxer” Eamonn Magee Snr.
The jurors heard that at the time of his death, Mr Magee Jnr was studying at Ulster University and also worked part time as a personal trainer.
The judge said that at the time of the killing, Mr Koca worked in a bar and a barber’s shop, both in West Belfast.

During the selection process, prospective jurors were given a map of several locations central to the case, as well as a 22-item questionnaire, to ensure they knew nothing about the circumstances.
The questions ranged from whether they knew anything about Mr Magee or his family to whether they had any boxing associations.
The trial is expected to start on Thursday.