Kerr open to an inter-county return 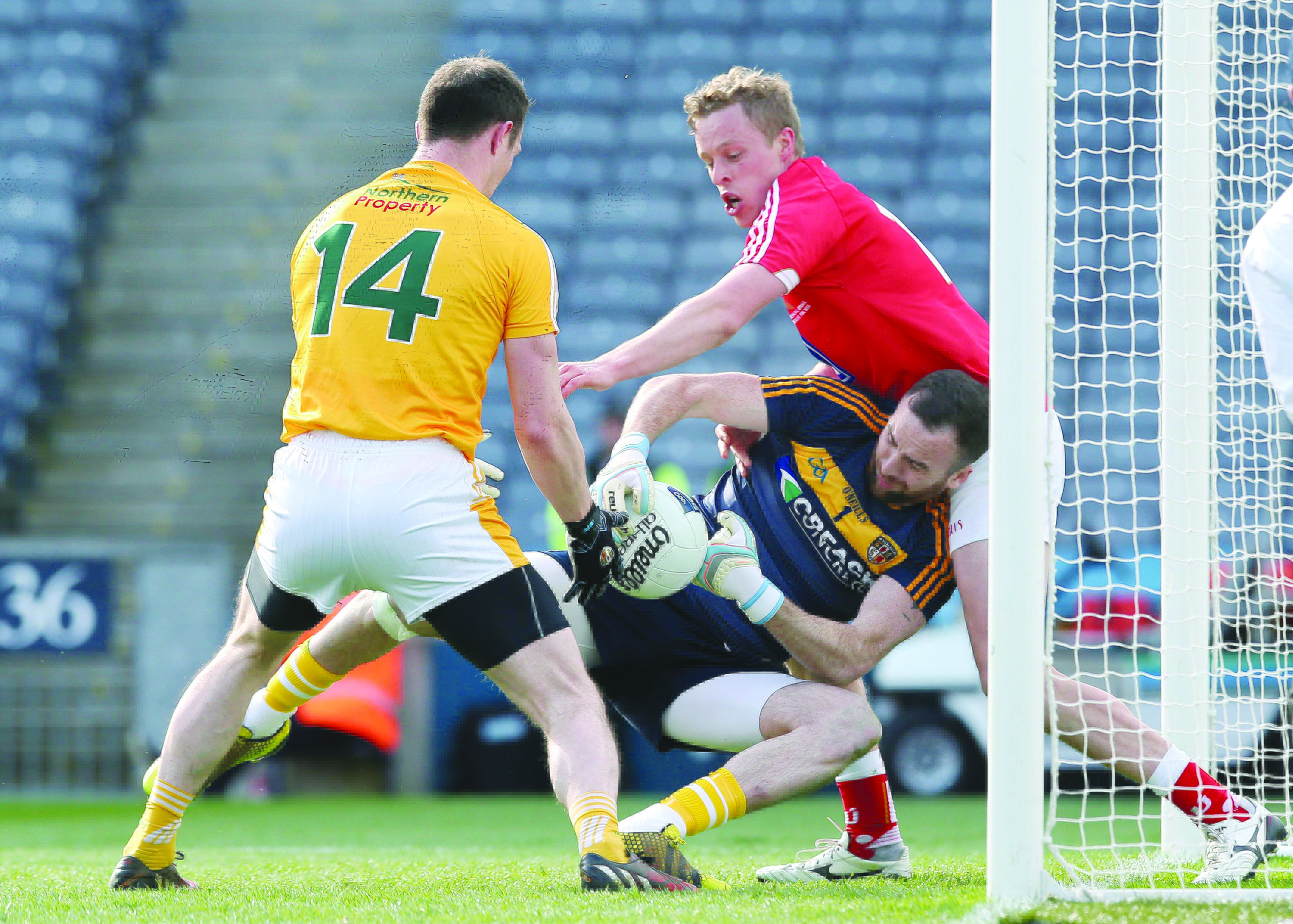 CHRIS Kerr has revealed he still harbours ambitions of donning the Antrim jersey again and is excited by the new Saffron management team.

The St Gall’s shot-stopper retired from inter-county duty back in 2018, but has suffered two cruciate knee ligament injuries in the last two seasons.

However, as his second stint of rehab draws to a close, Kerr isn’t ruling out an inter-county comeback.

Seasoned campaigners Paddy Cunningham and Michael McCann returned to the fold last season and were among Antrim’s best players and Kerr had been on course to re-join Lenny Harbinson’s squad until his season was ended by a second ACL injury.

Padraig Nugent was Antrim’s number one goalkeeper for the 2019 campaign, but his soccer commitments with Belfast Celtic saw him step away from the Saffron squad.

“I’d even just love to watch a game in the McKenna Cup at the minute.

“Lenny (Harbinson) had asked me to go again last year. If I can get back to that level again and I am playing well, then why not? You are a long time retired – so people keep telling me.

“The back-to-back injuries, not that I ever took things for granted, but it makes you think what is it going to be like 10 years down the line when you aren’t playing at all?

Whether or not Kerr can regain fitness in time to feature in Enda McGinley’s plans for the forthcoming campaign is another matter and time isn’t in his favour.

Last week, the GAA confirmed their roadmap for the revised 2021 campaign with inter-county action set to return in May.

The 2021 Allianz Hurling League will begin on the weekend of May 8 with the Football league commencing a week later on May 15-16.

The Allianz Football Leagues are split between north and south regions with four teams in each group with the top team progressing to the semi-finals while the bottom two teams will enter relegation play-offs.

In Division Four, the bottom teams will play-off in a Shield.

The Saffrons have been pitted against Louth and Leitrim, who were relegated from Division Three last season and Sligo who are managed by former Armagh All-Ireland winner Tony McEntee.

The Wee County also have a new management in place for the 2021 campaign Mickey Harte and Gavin Devlin taking over the reins.

They’ll sharing a sideline with their former Red Hand colleagues McGinley and Stephen O’Neill later in the year.

Kerr feels McGinley and O’Neill are a good fit for Antrim and feels his St Gall’s clubmate Sean Kelly is a great addition to the backroom team with Errigal Ciaran’s Stevie Quinn completing the management set-up.

“It is exciting times for Antrim,” said Kerr.

“Lenny was unlucky with Antrim too. He had a brilliant strength and condition coach in too in Fintan Devlin. He had played and won Ulster title with Loup.

“Lenny was a bit unlucky in terms of injuries and, the million-dollar question in Antrim, getting the best players out on the pitch.

“Getting Enda McGinley and Stephen O’Neill in is exciting – they’re All-Ireland winners with Tyrone.

“Sean Kelly, not only was he a great player for St Gall’s, but as a player/manager he was brilliant. His temperament and know-how in games is second-to-none. When he speaks, everyone listens – he has that respect straight away.

“A lot of people will learn a lot from them. They might learn a few home-truths too and that can only be a good thing. You aren’t going to argue with Stephen O’Neill in a shooting drill or talk back to Enda McGinley or Sean Kelly about tracking back or winning breaks.”

With the inter-county season going first, Kerr at least has more time to get himself back to full fitness while he has also linked up with the Grange senior footballers as a coach for 2021.

It is not yet known when the Armagh leagues will resume as they remain outstanding from the 2020 season and there is a dispute on whether or not they should be restarted or voided.

Kerr is hoping to jungle his new coaching commitments with a return to action for St Gall’s later in the year.

The draws for this year’s Antrim Championship have already taken place with the Milltown Row side being pitted against last year’s beaten finalists Creggan and fellow West Belfast side Gort na Móna in Group Four.

Kerr’s only taste of Championship action last summer was in the win against the Turf Lodge side. He suffered a groin injury late in the game and was forced to miss the subsequent home defeat to Naomh Éanna.

A slip in training ahead of the return clash with the Hightown men led to a rupture of the same anterior cruciate ligament.

With almost eight months of rehab behind him, Kerr is relishing the prospect of a return to action in the coming weeks.

While he remains unconvinced as to the merits of the group format, he feels plenty of teams will fancy their chances in 2021 and believes former St Gall’s manager Carl McCabe will have a big impact on Naomh Éanna this season.

“The group format has pros and cons. I think in the early games in the group stages last year, there was no real edge to the games,” added the 34-year-old ’keeper.

“When I picked up the injury, I was doing a bit of commentary during the live streams. Once it went to the knock-out stages, you could see the difference in intensity.

“I don’t think anyone really fears each other anymore. The top six in Antrim will be there again. Naomh Éanna beat us last year and I think they’ll be even better again with Carl McCabe going in as manager.

“Carl managed us (St Gall’s) for four years and was really successful. He is a brilliant manager and has a great way about him. Naomh Éanna will be there or thereabouts and will fancy their chances along with everyone else.

“It is hard to know how teams will fare out when everyone gets up and going again.
“From a personal point of view, I hope it is a bit further down the line.

“At least I know I don’t have a lot of catching up to do in terms of getting back to full fitness.”