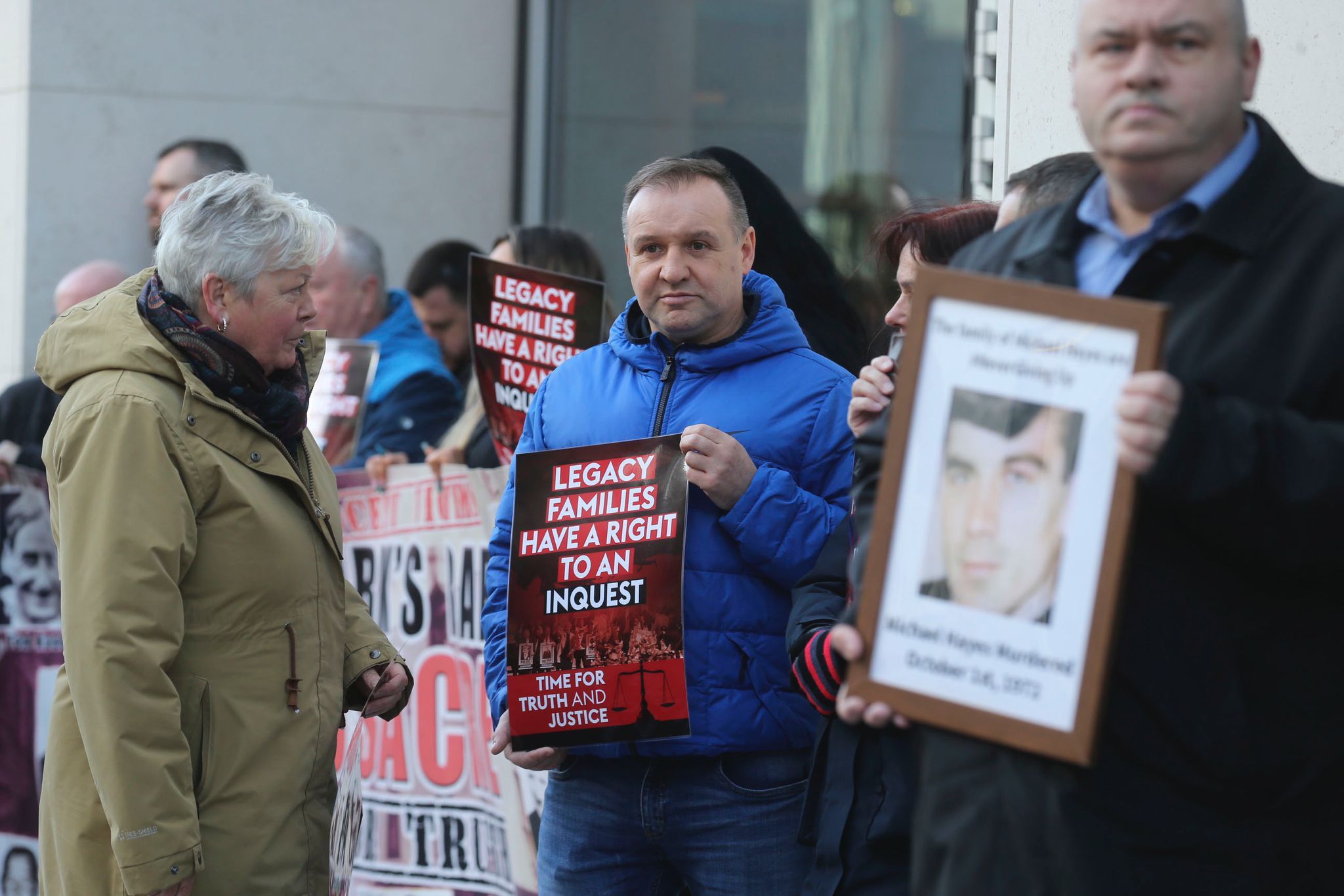 BILL OF SHAME: Families of those killed in the conflict gathered outside the NIO's Belfast HQ on Wednesday as the second reading of the Legacy Bill got underway in the House of Lords

POLITICAL representatives joined families outside the NIO to protest against the British Government's legacy proposals as their Legacy Bill reached the second reading stage in the House of Lords.

The bill, once passed will prevent any legacy investigations from taking place and will provide immunity from prosecution to anyone whom is deemed to have cooperated with the yet to be established Independent Commission for Reconciliation and Information Recovery (ICRIR).

Speaking ahead of the protest, which coincided with similar action in both Derry and London, Relatives for Justice CEO Mark Thompson described the bill as "draconian".

"This Bill is an amalgamation of every underhanded tactic deployed since 1998 by the PSNI, MoD and the NIO against families seeking justice through human rights provisions enshrined within the GFA," he said.

"These tactics range from excessive delay, failure to trace witnesses, the concealment and destruction of evidence, to the widespread use of public interest immunity certificates, and even the use of secret courts in the form of Closed Material Procedures under the Justice and Security Act (2013).

"And as if families haven’t endured enough the latter prevents them, and their lawyers, from being present during court hearings about the murder of their loved ones. Like this Bill, that is cruel and inhumane."

Standing in solidarity with victims families outside Westminster today to show our opposition to the British Government’s Bill of Shame. @tftcampaign @johnfinucane #Time4Truth pic.twitter.com/iP56tBY9n3

Sinn Féin MP John Finucane called on the British government to bin its "cruel, callous and offensive" Legacy Bill and attempts to block families' access to truth and justice.

The North Belfast MP also welcomed comments from church leaders who said that the Bill will not achieve any of its objectives and will prevent relatives of victims from getting investigations.

Speaking from London Mr Finucane said: “The British government’s Legacy Bill will essentially pull down the shutters on hundreds of victims and families who are campaigning for truth and justice.

“Seeking to prevent families from exercising their right to seek truth and justice for their loved ones is cruel, callous and offensive.

“There has been widespread opposition to this legislation, not only from victims and families, but also political parties, human rights experts and senior political figures in Europe and the US.

“Only today church leaders in the North have also said that the Bill will not achieve any of its objectives and will prevent relatives of victims from getting investigations which are human rights compliant."

He continued: “It’s simply not good enough that the British government wants to cover up its role in the conflict and let its own state forces, who killed Irish citizens, off the hook.

“I joined campaigners in London today, to make it clear this flawed legislation once again must be scrapped and the legacy mechanisms agreed at Stormont House implemented in a human rights complaint manner.”

Meanwhile, People Before Profit MLA Gerry Carroll said that the Bill is "designed to cover up the crimes of the British state and its proxies.”

“It will specifically be utilised to offer amnesty to state forces, as well as the state-backed death squads who terrorised the people of the North," he said.

“Bereaved families deserve truth and justice. The so-called reconciliation bill offers neither. It has been rejected by victims, all parties of the island of Ireland, and in the wider international community."