DÚLRA: A Cave Hill ordeal in aid of a rare bird of prey 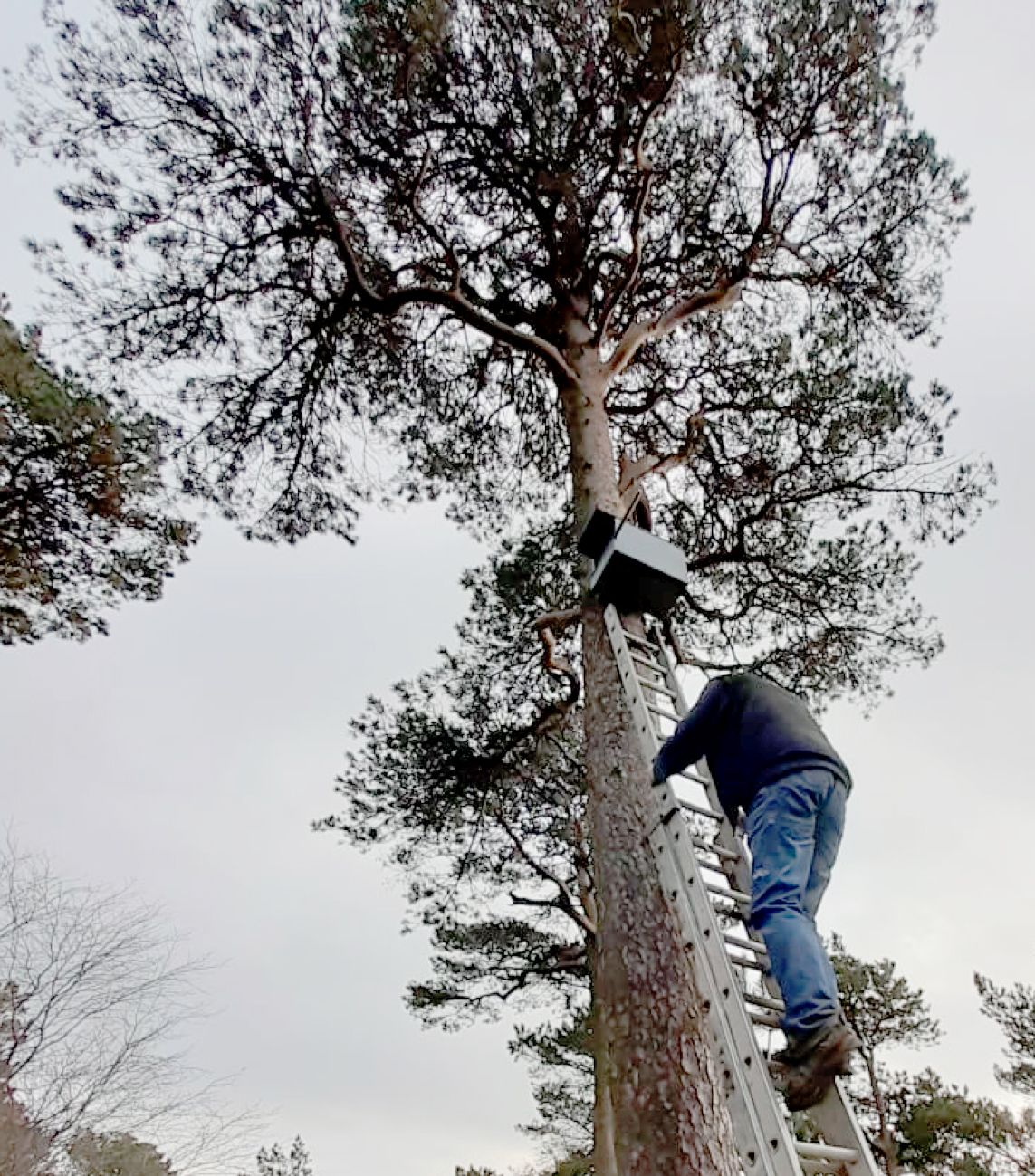 TEAMWORK: Andy scales the ladders to put up the kestrel nesting box on a Cave Hill pine tree

EVER try carrying a ladder to the top of Cave Hill? Of course not – because you’re not stupid. Dúlra, on the other hand, not only did it once, but twice.

Last week he was suckered in to put, literally, his shoulder to the wheel in a bid to give the kestrels of Cavehill a new home.

It was a worthy project – kestrels have suffered a calamitous decline all over Ireland because of our overuse of rodent poisons, but thankfully they’re still holding out on the Belfast Hills.

A decade or two ago they could be seen hovering over every motorway verge and even the gardens of West and North Belfast. Today if you want to catch a glimpse of this spectacularly beautiful falcon, you’ll have to put your walking boots on.

There’s no finer sight than a kestrel soaring below while you’re on the hilltops. Its deep crimson back – something you rarely see from the ground – is mesmerising. You need good binoculars to do it justice – the city as a backdrop only makes it better – and it’s something that is rarely if ever caught on camera.

Project 2021 to sketch each species I see. No 71 Kestrel
Went to Prestwick Carr to see a Kestrel but after an hour not one anywhere, then all of a sudden two take to the air. pic.twitter.com/UGIE15zU9c

A pair breed on a quarry near Colin Glen, another on Black Mountain and a third pair on a long-abandoned quarry on Cave Hill.

Nest sites are at a premium – they’ll not share a quarry with another breeding kestrel. But they’ll take to nestboxes as readily as a garden blue tit. And just like in your garden, these boxes don’t have to be hidden in any way. As long as it’s secure, they’ll move in, even if it’s on top of a post in a bare field. In Scotland, 285 chicks were reared in three years in boxes put up in a new plantation.

And so it was decided to give the Cave Hill kestrels a helping hand by putting a purpose-built nestbox on the hillside.

Built to exact specifications by environmentalist Andy Graham, the ideal spot was identified in a patch of forgotten pine trees on a steep slope near the summit. This is perfect kestrel country – remote yet not far from where they are presently breeding. The thinking is that chicks raised in the nearby quarry will find the box and attract a mate to it next year.

Dúlra couldn’t wait to help – but he didn’t fully appreciate what he was letting himself in for. Maybe that was just as well or he would have politely declined.

A local builder donated his ladder and it was Dúlra’s job to get it to the top. A summer stint window cleaning many moons ago didn’t quite prepare him for what lay in store.
There’s no path to the pine trees so we just had to start the long trudge through thick undergrowth of hawthorn, blackthorn and hazel.

Some people pay good money to join gyms and have personal trainers watch them toss tractor tyres around a room. Well, this was all that and more – and for free.

Sometimes Dúlra was able to balance the ladder smartly on his shoulder, other times an end would catch in a bush and he’d have to trail it. He slipped so many times that every stitch of clothes was covered in mud. But by hook or by crook, he reached the pine trees, knackered and soaked in sweat. A panting Dúlra fell in a heap into the heather. His shoulders ached but it was the calves that had really taken a battering.

Andy – the brains behind the operation – set about preparing to place the sturdy nestbox which he had carried up. But there was a problem. When the ladder was rested against the tree, it only reached head height because so much of it was lost in thick ferns at the base. The box needed to be much higher – certainly well out of reach of any curious hillwalkers. We needed another rail of ladders.

Dúlra was too exhausted to put up a fight – “I’ll get them,” he meekly said, the words coming out of his mouth without him even registering what they actually meant.
We’d come this far, and the job had to be finished. And so while Andy rested on the mountainside admiring some of the finest views in the country, Dúlra slid back down the muddy trail to the builder’s yard, got the other half of the huge ladders, and started the ascent once more.

They say it’s easier the second time – that’s a lie. The calves were burning now and his shoulder was raw. But he eventually made it to the summit once more.
With the second rail extended, the ladders reached 30ft, where the nestbox was fasted to the trunk with a drill and screws.

Dúlra might never make the return journey to see if the box attracts the pocaire gaoithe, but if this wonderful bird makes a comeback in Belfast in the next few years, he’ll know he’s played a hand in it. And a shoulder.