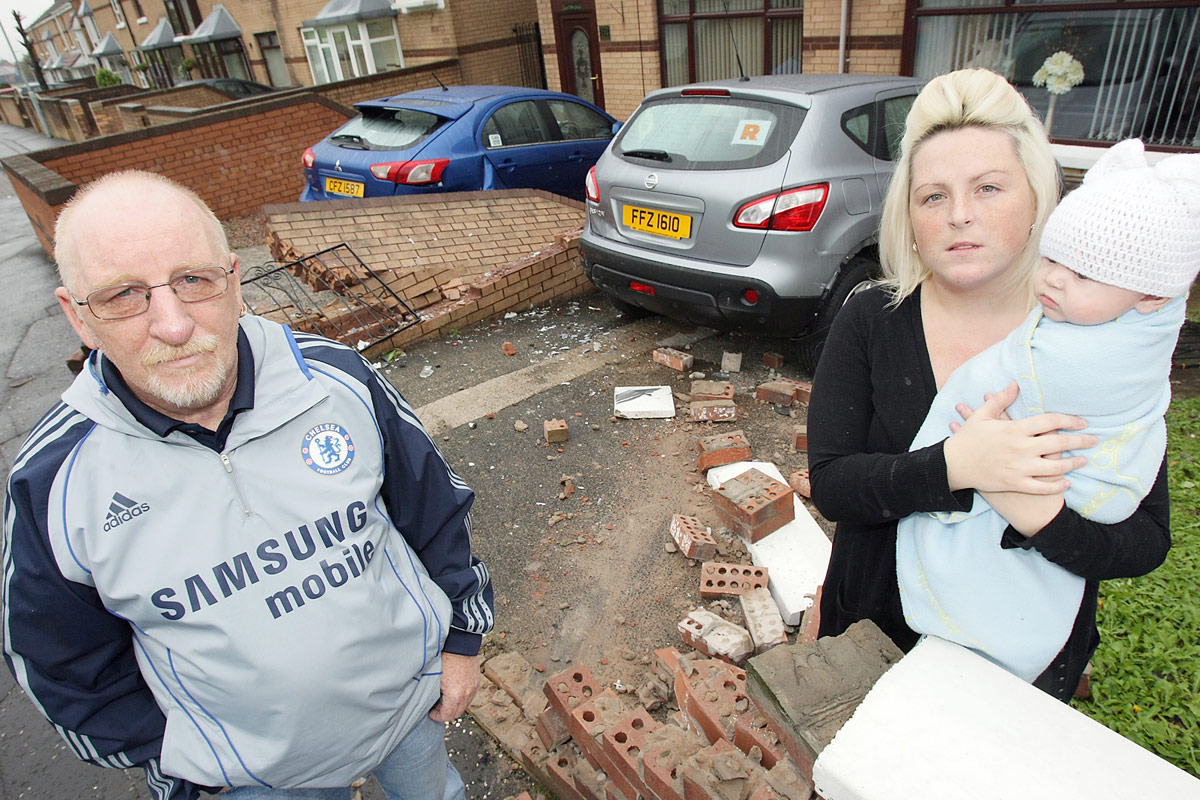 THE MOTHER of a disabled child and a five-month-old baby has told of how death-drivers cheered when she looked out the window to find they had smashed into the front garden of her home.

Shauneen Kane, 26, was speaking to the Andersonstown News after the shocking incident, which took place in the early hours of Monday morning in Norglen Parade and which also damaged her next-door neighbour’s car and knocked down the dividing wall between the two homes.

“My youngest son Adam is teething and he woke at about 2am so I was sitting in my front room tending to him,” she explained.

“I went to bed and woke again at 3.15am as my other wee boy Aaron, who suffers from a brain virus that causes him to suffer from severe epilepsy, woke up.  I couldn’t even describe the noise, but I knew it was a car and my boy started screaming.  I ran to the front of his room and I saw them.  As I looked out the window I turned the light on and they started cheering as they could see me.  They reversed out and drove on.”

Shauneen explained that the damage done to her front wall and car meant had a medical emergency taken place her son would have been stranded.

“My car was pushed right into the house so if Aaron had taken sick last night I would have had no way of moving the car out,” she said.

“Sometimes he needs a wheelchair if he’s had a seizure, so there would have been no way to move him out of the house today if he needed the chair. I’m in this house three years but I know this sort of thing happened to the previous owners three times.  But other houses on the road have been hit before too.”

Shauneen’s neighbours, Desy and Collette Hesketh, said they couldn’t believe the damage done to their garden wall and car.

“About two years ago we had our front wall knocked down by joyriders,” said Collette.

“If you were to go the length of this street nearly every other house has had a wall hit by joyriders.”

“The police say they recovered the car in Poleglass,” said taxi driver Desy, who is unable to work until his five-month-old car is fixed.

“I have to wait to see if the insurance company need to photograph the damage and then I’ll have to claim for the money through my insurers before the Motor Insurance Bureau will pay out.

“The amount of these incidents that has happened on this stretch of road alone over the last lot of years has been absolutely phenomenal.”

A spokesperson for the PSNI appealed for anyone with information on Monday morning’s crash, which they said involved a silver-coloured car, to come forward.

“Anyone with information about the incident is asked to contact Woodbourne Police Station on 0845 600 8000. Or if someone would prefer to provide information without giving their details, they can contact the independent charity Crimestoppers and speak to them anonymously on 0800 555 111,” said the spokesperson.