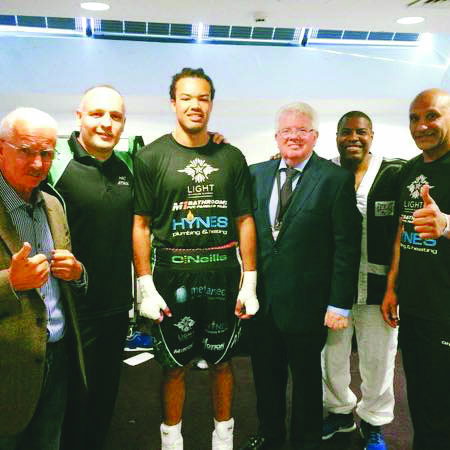 Tommy McCarthy with coach, Brian Magee and his team after Saturday’s impressive win against Jon-Lewis Dickenson in Glasgow to move him to the brink of a British cruiserweight title shot

BRIAN Magee says the plan for Tommy McCarthy is to reach world level following the West Belfast man’s impressive win over Jon-Lewis Dickenson in Glasgow on Saturday that sets him up for a crack at the British cruiserweight title later in the year.

Magee is no stranger to world level having won the WBA super-middleweight title and challenging for the IBF strap during his own impressive pro career, so he knows exactly what is required to get to the top.

Now giving instructions rather than receiving them as McCarthy’s chief second, Magee says Saturday’s victory and future challenge for the Lonsdale Belt will simply act as steps in the road to where he feels his man can go.

“That’s Tommy’s name up there now for it (title),” said the former world champion who offered his thanks to McCarthy’s sponsors including O’Neill’s for helping their preparations.
“We know it’s (title shot) coming and when it does come around, we will be looking to move fast.

“We want to keep him busy now whether he has an eliminator next or some form of title, but we definitely want to build on this win. What we are doing in the gym and in camp is training for the future. We aren’t thinking British or European titles, we’re thinking world titles and everything we are doing is for the world title.

The British title is currently held by Ovill McKenzie, but ‘The Upsetter’ has not defended the belt in 14 months and it is expected Matty Askin and Craig Kennedy will square off for the soon to be vacant strap with McCarthy set to meet the winner.

To get to this point, ‘Mac Attack’ overcame Dickenson in front of the Sky Sports’ cameras on Saturday in what was viewed as a risky fight given it was just the West Belfast man’s ninth pro contest.

Despite Dickenson having a huge advantage in terms of experience, it was McCarthy who dominated from the off, picking his shots well to control the distance and pace.
He had the Durham native over in the sixth with a chopping left hook and while the former champion beat the count and rallied well late on, McCarthy had more than enough in the tank and won a comfortable unanimous decision (97-92, 97-92, 98-91).

“It was a brilliant win,” agreed Magee.
“People always forget this was only Tommy’s ninth fight and two of those came within a week of each other (back in December) so this was a big step up from four and six rounders. He had one eight (rounder v Courtney Fry), but here he stepped right up against a good opponent.

“I thought he (Dickenson) did a great job. He got himself into great shape and was very fit. He showed he was hungry and ambitious throughout the fight, but Tommy just closed him down, neutralised him and won round after round.”

While such a mature performance against an opponent who has won the Lonsdale Belt outright (successfully defend three times) suggests McCarthy is ready to move up another level, Magee feels this is just the beginning for his man and there is much more to come.

“There are things we worked on that didn’t come off, but it is a massive hurdle as a pro boxer when you are coming up the rounds and to do your first ten rounder,” he added.
“The next (level up) will be a 12 rounder and that’s another massive hurdle.

“We have just been training with each other for a lot of months now and he knows he is in the best shape of his life, but it’s only when he is in the ring he can really see it.
“It’s ok sparring eight rounds, but doing 10 rounds in a ring and knowing he is capable of more is big. He will see himself getting better in each training camp and improving all the time, so it was great to see him go out there on Saturday and do it. He didn’t take many shots, he defended well and did everything well.”

McCarthy and Magee have only been working together a matter of months with this victory just their third outing together following two quickfire wins over Vladimir Reznicek and Martin Szatmari in England last December.

Magee says they are still getting used to each other a little but are gelling well and he says the Lenadoon man is a dream to work with as he begins his own journey as a trainer.

“He is a great trainer. Anything I tell him to do he does. He doesn’t question anything, he just does it so he is easy to work with,” confirmed Magee who is also a native of West Belfast.

“Those are the type of people you want to work with as a trainer, people who want to be champions and want to be good.
“Tommy is a smart boxer and he can think for himself, but he’s learning all the time and he’s picking up things. I’m learning about him as we go on as well, but it’s a great relationship already.

“I know what he can do so I suppose that makes you nervous.
“It’s been a great year for me to be a coach and a trainer as I’ve got to work with a great boxer, have worked in Croke Park (with Antrim’s footballers) and Tommy is starting to kick in doors in the UK boxing scene.

“That was a massive win for him in the UK as there were so many people watching the bill that night. It’s great exposure for him and that’s what he deserves as he is a great talent.”