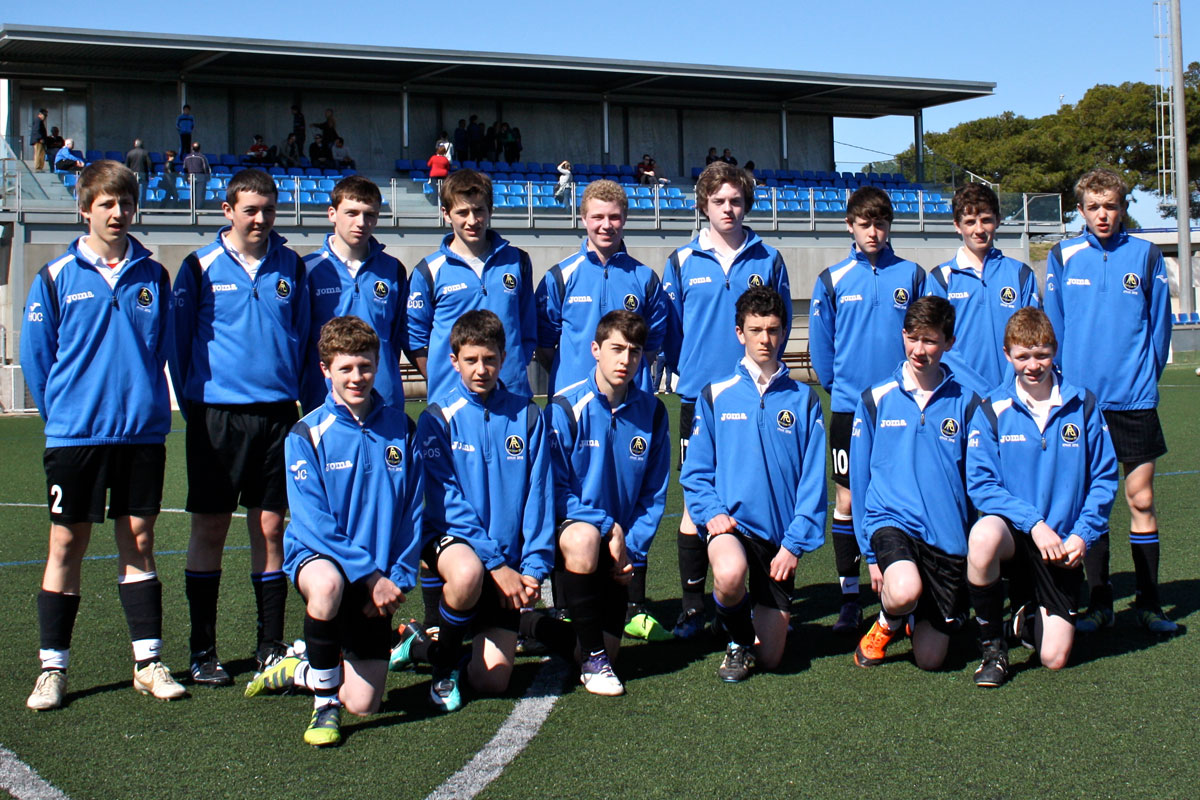 Easter 2012 will live long in the memory of the merry band of Aquinas U16s who ventured to Spain to take on some top teams and academies from around Europe – and came so close to conquering all before them in a dramatic Costa Daurada Cup competition.

Arriving a day early, the process of acclimatising began straight away with a ferocious game of beach soccer with the boys dividing into teams representing their respective schools.

A close contest saw St Patrick’s, Knock edge home by the odd goal in 15, despite the rough-house tactics from the physical Rathmore team.

After a relaxing evening by the pool, followed by an early night, the action began in earnest on Good Friday morning with the Group A opener against Tarragona side Les Borges in sunny Salou.

Despite experiencing some early difficulty with the officiating (which rendered the game virtually non contact), the young Blue ’n’ Blacks romped to a comfortable victory 4-0 with a superb hat-trick from striker Paddy O’Boyle and a fine slot by Cormac O’Hanlon.

Next up was an evening fixture in Cambrils against Basque outfit, Olabide. A tense opening half saw Aquinas keeper Conor O’Doherty make a couple of smart saves and sweeper Caolan Lynch needed to be at his majestic best for a spell before centre half Niall McCourt, who was excellent throughout the tournament, settled the nerves with a towering header from a Matt Carson corner.

Peter Morgan expertly nodded in the second with 20 minutes to go and Joe Cunnane got just reward for a great shift with the third at the far post to complete a fine first day.

Day two started early with what would prove to be, by general consensus, easily the best game of the tournament at any of the age groups. In 10 or 20 years time this is the match the boys will keep coming back to when they meet in the street and reminisce.

The opposition were the home team Cambrils, an academy of unbelievable talent who in the recent past have had players move on to Barcelona and Espanyol youth teams.

The massive crowd were extremely partisan, particularly as the physical strength and passing and movement of Aquinas began to be reflected in possession and territorial dominance.

Matt Hughes gave a masterclass in leading the line with Thomas Cafolla and Philip O’Sullivan snapping at everything in midfield.

Just as the game seemed to be drifting towards stalemate Aquinas found a winner that, in neither its craft nor its execution, would surprise anyone in the South Belfast Youth League.

A perfectly flighted Carson corner onto the forehead of Conor Flynn equals 1-0.

A late sending off for the home side and a bit of argy bargy after the final whistle could not detract from what must rank as one of the best performances the team has ever produced.

With only a couple of hours to gather themselves together Aquinas found themselves in the semi-final against EF Cervera from the town of Lleida on the French border.

In a hugely frustrating match, during which the Blue ’n’ Blacks were again the dominant team, absolutely nothing fell to an Aquinas jersey in the opposition box.

A Cunnane screamer struck an upright, and great efforts from Dan Rainey and Hugh O’Connor shaved the bar as the game somehow ended scoreless.

However, not even the trauma of the subsequent loss in the penalty shootout could take the gloss off this wonderful trip, throughout which this great bunch of lads represented their families and their club with class and distinction and amazingly returned home having achieved the incredible feat of going through the whole tournament without conceding a goal.