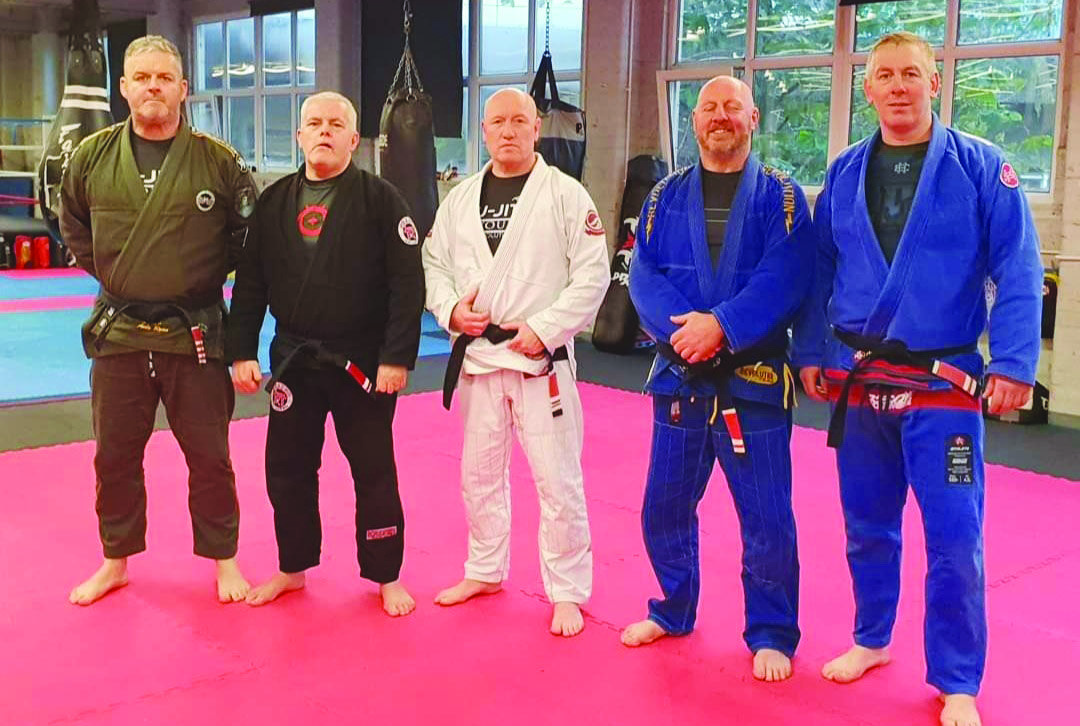 IT was a perfect start to 2022 for the four local clubs that all provide training in Brazilian Jiu-Jitsu, when their four Black Belt coaches were all unexpectedly promoted at the last training seminar of 2021 with Head Coach of the All-Ireland ‘Revolution Team’, Andy Ryan.

Brazilian Jiu-Jitsu, the fastest growing martial art today, and widely regarded by many as one of the most practical and effective martial arts in the world, has produced 14 Black Belt-level exponents since it first arrived in Ireland in the late 1990s.

Made popular by the UFC and many MMA fighters, notably Ireland’s Conor McGregor, training provides well known physical and mental benefits to millions of exponents around the world, as a true performance-based training system.

On the last Sunday of December, National Head Coach Andy Ryan delivered a masterclass in leg locks to attendees from 12 different BJJ clubs located around the North.

At the end of the three-hour session, Pete Lavery Head Coach of Kyoujin MMA, (based at the new CHILD Academy premises in 44 -46 Corporation Street) was awarded his second degree Black Belt after more than 20 years constant practice and coaching.

Close behind him, Seamie Strain, also a coach at Kyoujin, Robert Cullinan, Head Coach of Merville & Grove Jiu-Jitsu Clubs, and John McTasney from Full Circle Martial Arts in Ligoniel were all awarded their 1st Degree Black Belt, recognising a higher level of technical ability than the regular Black Belt award.

Between these four coaches, there’s more than 100 years of combined coaching experience in Brazilian Jiu-Jitsu, Kickboxing, MMA, Judo and Japanese Ju-Jitsu…
Now’s the perfect time, with New Year resolutions still fresh in your head, to sign up for classes with any of these very capable individuals. Coach McTasney summed it up perfectly.

“A Black Belt is a White Belt who never gave up.” he said.

“The hardest step is the first one through the door the first night.

“Very soon, you realise everyone else is just like you, maybe with a little more knowledge, but if you keep turning up, you soon see big improvements.”

Seamie Strain added: “Too many people focus on getting belts, and can get disheartened when that doesn’t happen quickly. Just come and train.

“Your physical fitness and mental wellbeing will improve and when you’re ready, the belts will come. Don’t stress, just enjoy each class.

“There are 14 qualified Brazilian Jiu-Jitsu Black Belts in the whole of the North; four of them live in and train in North Belfast. That’s the highest concentration of BJJ talent anywhere in NI.

“Between the network of Kyoujin, Full Circle, Merville and Grove clubs, you can find a training session every day of the week, all located in North Belfast, and open and accessible to all.”

Additionally, as part of the wider All-Ireland ‘Team RYANO/BJJ Revolution Team’, their club members and training partners are part of a 3,000 strong All-Ireland Network of Jiu-Jitsu students, ranging from 5-65 years of age, training in 30+ clubs across the country.

Jiu-Jitsu is in good hands in Belfast, so why not come and see what all the fuss is about by visiting your local club and taking a class for free in 2022 with any of these newly promoted experts?