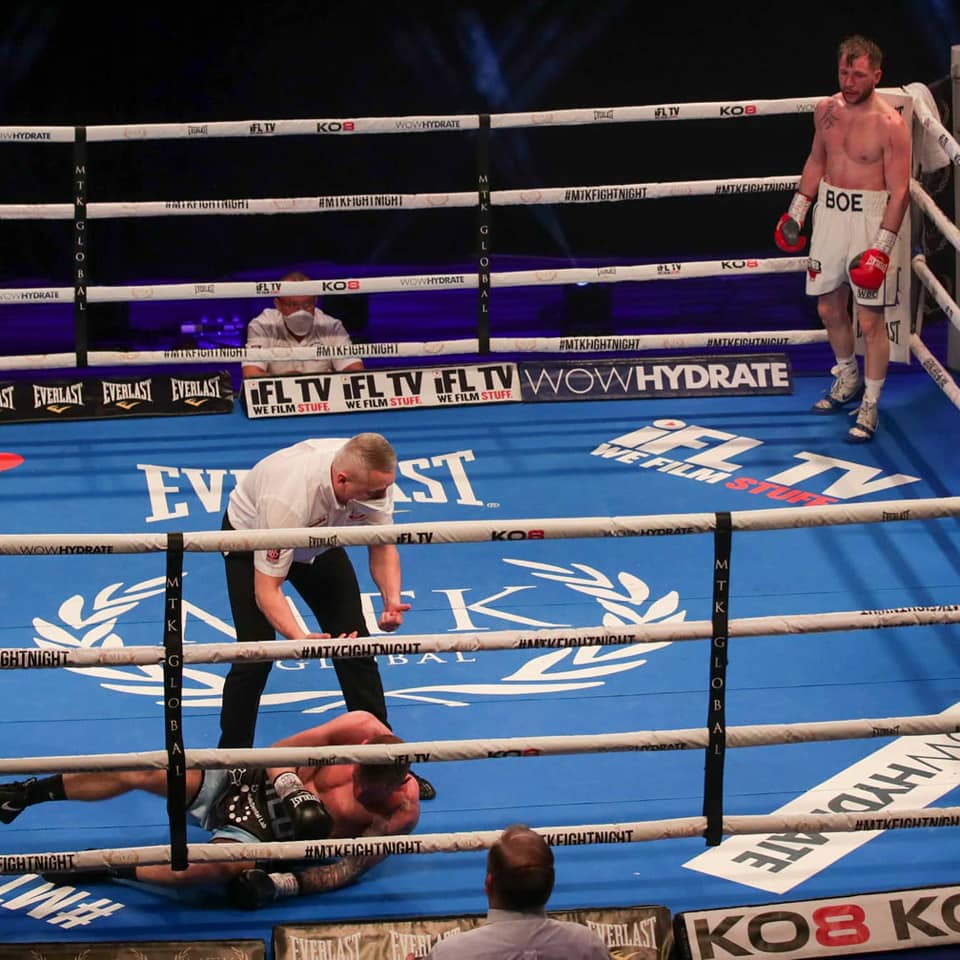 Paul Hyland Jnr on the deck from a shot he didn't see in the eighth that would end the contest. The Belfast man believed referee Mark Lyson had called break but the action was allowed to continue MTK Global

IT was disappointment for Paul Hyland Jnr in Bolton last night as his bid to become the British lightweight champion came up short against Maxi Hughes.

The fight ended in the eighth round in strange fashion as Hyland was decked after he seemingly thought referee Mark Lyson had called break as he turned his back when buckled by a body shot by Hughes.

With Hyland not quite touching down and therefore not receiving a count, Lyson was happy to allow the fighters to box on. Hughes took full advantage as Hyland had his hands down to land a right to the jaw that did put the Belfast man on the canvas and that was that after 1:20 of the round with Hyland's corner furious.

In fairness, it looked as though the Yorkshireman was on the brink of a stoppage as his body attack was emptied the fuel tank of 'Hylo' who was game throughout and happy to try and fight fire with fire, but perhaps this played into the hands of Hughes whose recent winning streak continues.

📺 Main event coming up NEXT on IFL TV.

"Coming into the fight it was always our plan to go to the body as Patera had stopped him with body shots and Ritson had hurt him, although he finished him to the head," said the delighted Yorkshireman who won the title at the third time of asking.

"The finish, he was backed onto the ropes and I caught him with a body shot; he dipped and half turned. I stepped back anyway but he then turned his back. I looked at the referee's eyes and he said to box on so I did.

"He (referee) came up to the dressing room before and said 'defend yourself at all times' and Paul didn't do that. I did what I had to do and hit him with a good shot to make sure I won this belt. His dad (Paul Snr) wasn't happy but obviously, it's his lad."

It was a cagey opener with Hyland popping out the jab and southpaw Hughes looking to counter from a crouching position.

There was little in it until the final seconds with both men landing with power shots and set-up a second with both targeting the body as Hyland marched forward and made it a battle on the inside.

Hughes was clever with his work, ducking and rolling after landing as he enjoyed a good third. Hyland also had his moments as the action was heating up although was unhappy when on the receiving end of an accidental head-butt from the Yorkshireman.

Another in the fourth appeared to open a cut on the head of the Belfast man, but the round belonged to Hughes whose body attack was making more of an impact.

Hyland changed his approach in the fifth, using his height advantage to box on the outside where he enjoyed more success but was hit by a low blow that earned Hughes a warning. He opened the sixth well too, but when then engaging on the inside, was hurt badly as Hughes connected to body and head, forcing him to dig deep to stay upright.

This assault had clearly taken a lot out of Hyland who looked weary and appeared to take a huge gulp of air when another body shot landed in the seventh. His bravery couldn't be questioned as he refused to give in and looked to retaliate.

But the tank was emptying and hurt from a body shot in the eighth, his legs buckled but just about managed to stay up. He turned his back but referee Mark Lyson allowed the fighters to box on and Hughes took advantage, landing a right that dropped Hyland and despite just about getting up before the count reached 10, the fight was waved off.

"Gutted about the decision and the way it ended but that’s boxing. Both us were cutting the ribs of each other; it was still close enough and anything can happen in the later rounds. The ref did say stop boxing and I was catching my breath from the body shot and also caught one on the head I didn’t see coming - it is what it is.

"Thanks a lot to everyone for the support it’s unreal - much appreciated - and thanks to all my coaches, manager and all my sponsors who always help me out during camps. (I'll) take a rest a go again."

Earlier in the night, former Holy Trinity amateur Sean Duffy improved to 4-0 with a third round stoppage of Paul Holt.

Southpaw Holt had some early success, but the Keady man was soon into his flow, landing in flurries with referee Howard Foster almost ready to step in as the Birmingham man's head was being snapped back on the ropes, but was just about doing enough to reply and stay in contention.

Both men were cut badly in the second from what appeared a clash of heads as Duffy continued to pile on the pressure. Again, Holt was able to respond to stay in this entertaining battle, but not for long as after 1.03 the third, a crunching left to the midriff from Duffy had the Englishman down and unable to beat the count.