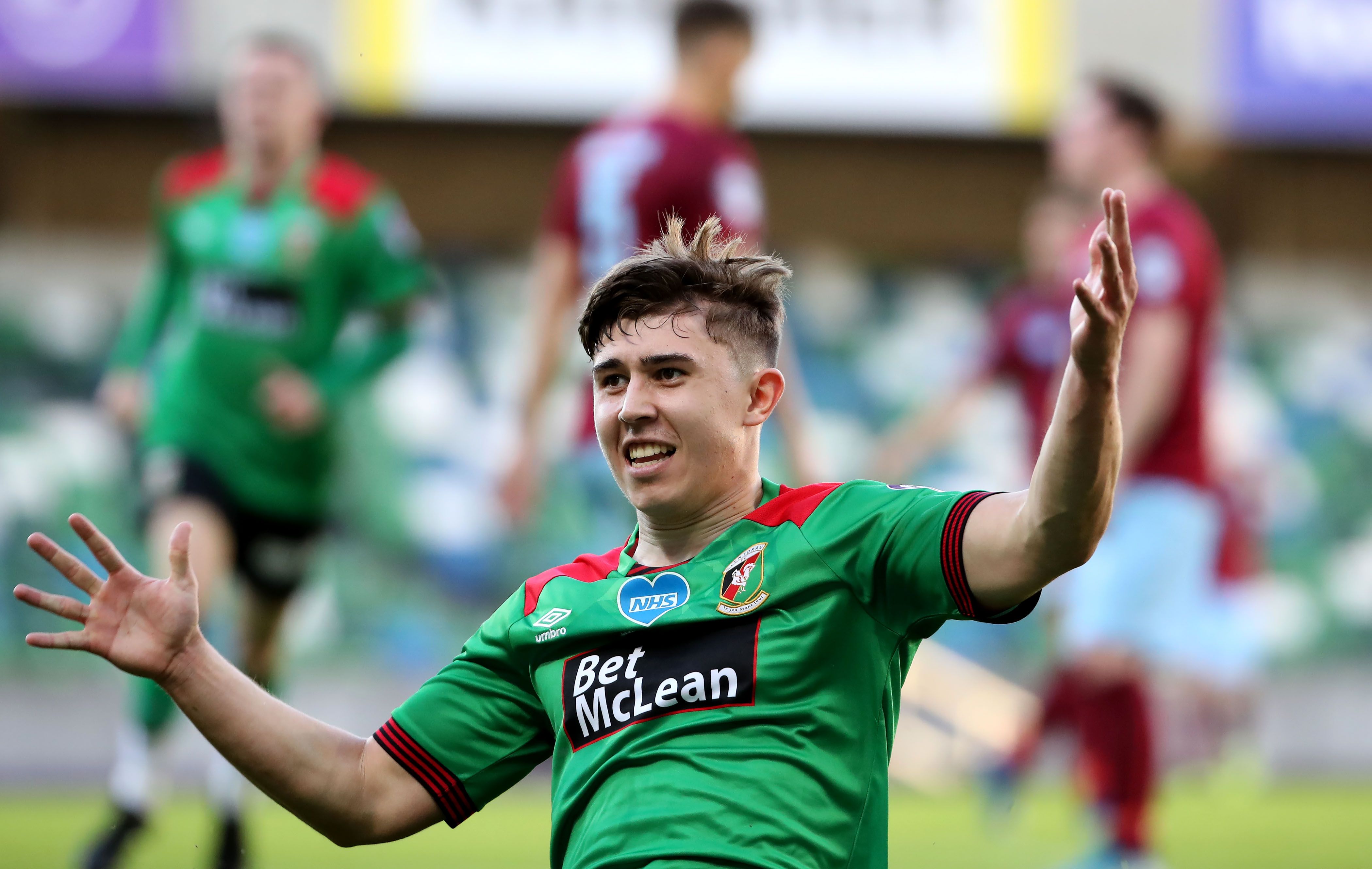 CLIFTONVILLE boss Paddy McLaughlin insists that Glentoran are a quality side capable of making things difficult for his team as The Reds make the trip to The Oval on Saturday afternoon (3pm kick-off) looking to maintain their unbeaten start to 2021, but claim a first victory in two games.

Successive draws with Glenavon and Coleraine sees the Solitude side in mid-table, four points ahead of Saturday’s opponents having played two games more.

McLaughlin’s side departed The Oval with maximum points on both occasions last season, but the Reds’ boss acknowledges a lot has changed personnel-wise for both clubs.

“Glentoran are a quality side,” McLaughlin admits.

“They’ve so many fantastic players that would walk into any top side in the division and they will make things difficult for us.
“We had a good record at The Oval last season and won both encounters, but a lot has changed personnel-wise for both clubs. We want to continue our unbeaten start, but it certainly won’t be an easy task and we’ll have to earn anything we take from the game.”

Saturday also a sees Paul O’Neill and Conor McMenamin come up against their former employers less than a week after the deadline day swap.

McLaughlin was full of compliments for McMenamin and was stunned that Glentoran agreed to release O’Neill as part of the transfer.

“Our stance was clear from the start and we never changed it throughout January: if anybody wanted Conor McMenamin, they had to pay top price because he is a top player,” McLaughlin outlined.

“The only way that we were interested is if we were bringing in a top player to replace him and Paul O’Neill was our number one target from the start. If Paul O’Neill wasn’t coming to Cliftonville then Conor Mac was going nowhere.

“To get Paul in was a brilliant signing for us. We wish Conor all the best and thank him for his efforts and everything he has done for us, but we’re excited to get Paul O’Neill in.

“He is one of the hottest prospects in Irish football and we were actually surprised we were able to convince Glentoran as part of the deal to bring him here. It was a brilliant piece of business and I have to thank the board and Gerard Lawlor in particular for getting the job done for us.

“Paul was probably frustrated that he didn’t get more time that he thought he deserved but Glentoran’s loss will definitely be our gain. He is a natural goal scorer but not just that; his work-rate, his strength, and the way he leads the line were all a big part of the reason that we went all out to secure his services. It’s not just putting the ball in the net but it’s brining other people into play and leading the line. His all-round play is fantastic.”

Another departure late in the window was popular goalkeeper Richard Brush making a move to Sligo Rovers to take on a player-coaching role.

McLaughlin paid tribute to his former shot-stopper and hopes he will still be able to feature on the field in the next chapter of his career.

“Brushy is probably the best ’keeper that I’ve been lucky enough to work with as a player and a manager,” he said.

“I want to thank him for the brilliant work that he’s done. Not just on the pitch are we going to lose him but in the dressing room as well. He’s one of the best fellas you’ll ever meet in the game and the opportunity to go bring his own career into the next level in terms of coaching with Sligo was too good for him to turn down.

“We would have never tried to block that from happening for him, he’s earned his next chapter in his career. Hopefully he stays in the game on the playing side because he still has a lot to offer and he’s still one of the best about in the division.”

’Point
Following from the trip to The Oval, the Reds host Warrenpoint Town on Tuesday evening (7.45pm kick-off).

Point are likely to be without the services of on-loan Thomas Maguire who joined Barry Gray’s side until the end of the season.
McLaughlin hopes that Maguire will return to Solitude in the summer with goals and first team football that he was frustrated he didn’t get this season.

“Thomas is just going out to get experience,” McLaughlin explained.

“A lot of clubs were interested in taking him on a permanent basis, but we had no interest in letting him go out permanently. He’s a wee bit frustrated at not getting enough game time this year and so every player should when they’re not playing.

“It was important we got him game experience because he is a bright prospect in the league for us. He’s a big part of the future for the club.

‘Thomas will be back in the summer for pre-season, hopefully with a few goals under his belt and a number of appearances. I’m sure he will do well down there; he is a good player with a lot to offer and it’s just unfortunate we couldn’t give him the game time that he wanted or needed. Hopefully, he comes back in July raring to go for next season.”