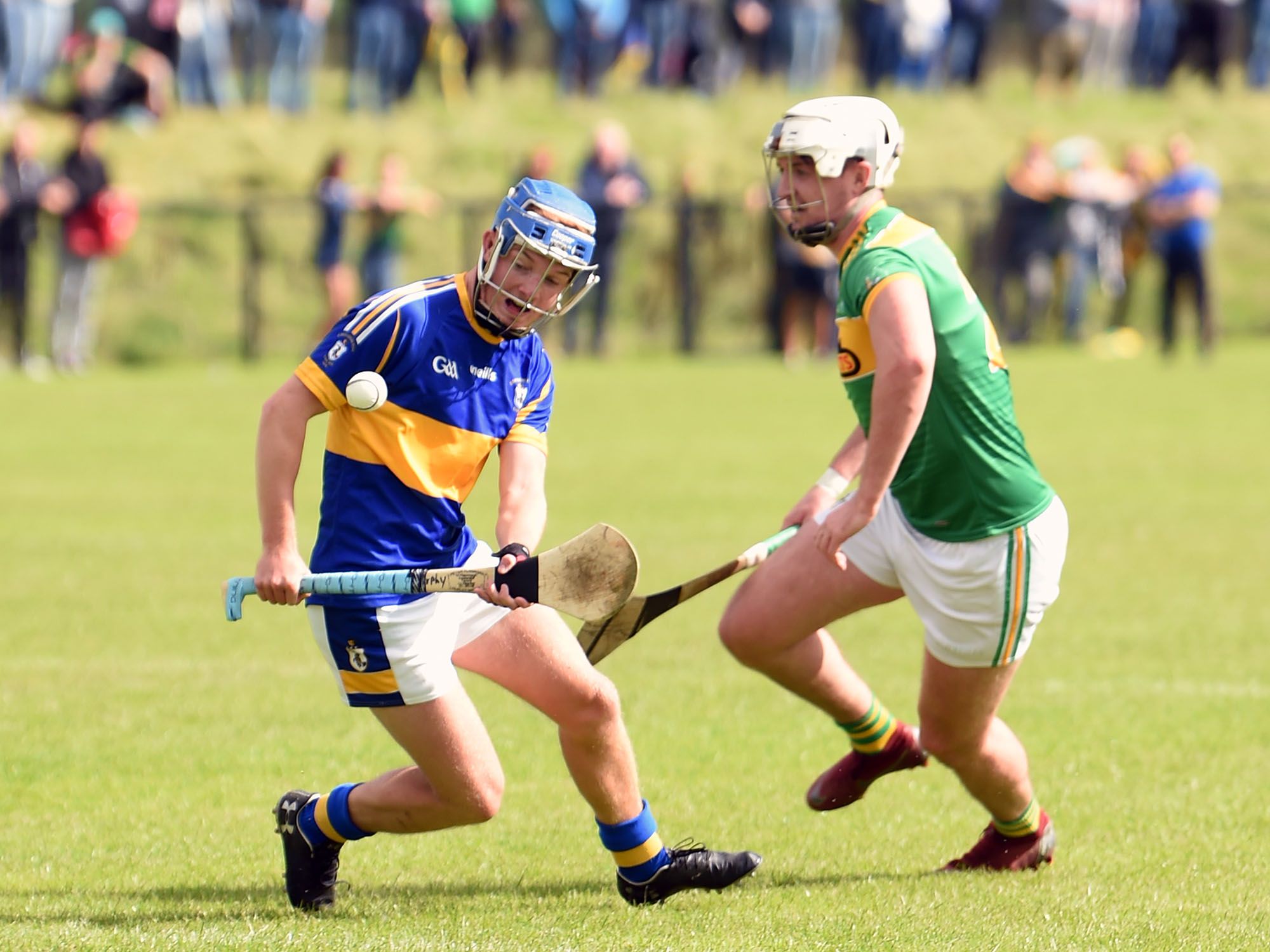 Tiernan Murphy gets out in front of Conor McKinley

CHRISSY McMahon was against the hero for Dunloy against Rossa as he struck six minutes into stoppage time to settle an epic Antrim Senior Hurling Championship semi-final at Dunsilly and break the hearts of Colly Murphy's men.

McMahon fired over a late equaliser in the group game between the teams three weeks ago and he was again the super sub for Gregory O'Kane's men who advanced into the final at the expense of a Rossa side that gave everything they had to recover from a slow start to put themselves in front heading down the final stretch.

It was cruel on a Rossa side who have lit up this year's Championship and all in blue and gold can be hugely proud of their efforts as they gave everything they had on the day, but it just wasn't to be.

It seemed this would be a routine victory for Dunloy who bossed the first 20 minutes and shut down anything Rossa had to offer, but the city side roared back magnificently to write another chapter in what has been a stunning campaign.

It was all level after 10 minutes at 0-3 apiece with Conal Cunning and Seaan Elliott on target for Dunloy withy Rossa's scores coming through Gerard Walsh, James Connolly and Deaglan Murphy, but Dunloy's hurling was much crisper as they dominated from the puck-outs and began to take charge.

Their advantage was rammed home on 12 minutes when Ronan Molloy plucked the sliotar from a Rossa restart, raced through and played a one-two with Gabriel McTaggart before firing to the net to make it 1-5 to 0-3.

They would find themselves eight clear approaching half-time with Keelan Molloy and Eoin O'Neill hitting some fine scores with Rossa relying mostly on James Connolly frees to keep their heads above water, but after some fine scores from Christopher McGuinness and Tiernan Murphy, this game would flip as a long Connolly free dipped and Michael Armstrong got the vital touch to the net as the city side found themselves just four adrift at the break, 1-13 to 1-9.

The sides went score-for-score early in the second period, but Rossa's confidence was growing by the second with the immense Aodhán O'Brien landing two magnificent scores from deep to bring them to within two at the water break.

Rossa continued to press on and after McGuinness brought the gap back to one, they grabbed the lead for the first time since early in the game when Stephen Beatty floated a high ball in and substitute Conal Shannon pounced on the break, whipping to the net to put his side 2-15 to 1-16 ahead with 10 to play.

Points from Seaan Elliott and Nicky McKeague levelled the game, but Rossa replied through Tiernan Murphy and Connolly to go two in front once more with just minutes of normal time remaining.

Dunloy dug deep with Cunning, Elliott and McMahon edging them back in front, but the game was again tied thanks to a Deaglan Murphy free in stoppage time.

It was now up for grabs and it was Dunloy who managed two carve out the final chance with McMahon getting on the ball to steer it over and send the defending champions back into the final.