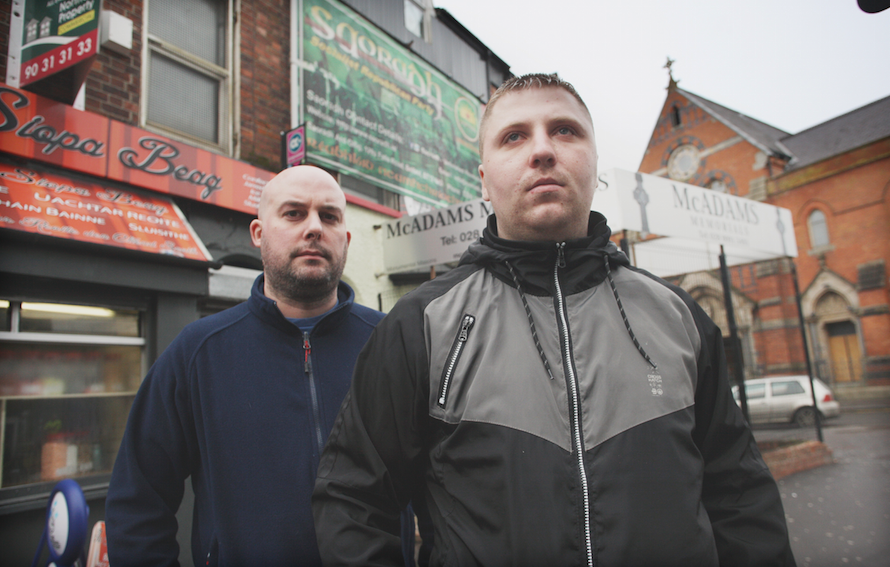 AN Ardoyne ex-prisoner and republican activist claims MI5 attempted to recruit him at an airport in France.
Conál Corbett (21) was on his way to board a 9pm Ryanair flight from Nice to Dublin after spending a week visiting his girlfriend’s family in France.
“My partner, who was in front of me in passport control, went through without any problems,” he told the North Belfast News.
“The policeman then looked at my passport and scanned it again and again before he spoke into a microphone saying ‘He’s here now’ in English.
“While standing there, during what seemed a relatively short period of time, everything went through my mind. A couple of minutes later, two policemen came to passport control-, one wearing a police uniform, He was white, tall and thin and had grey hair. The other was much smaller, medium built, was swarthy with black hair and did not wear a police uniform.
“The tall one walked over to the passport control officer and took my passport from him. He then came over to me and said, ‘Come with us, it will only take a couple of minutes and you will not miss your flight.’ He then made a hand gesture through the glass to my partner letting her know that they would bring me back.
“They took me around the corner and before walking down a set of stairs, the smaller non-uniform policeman asked me what I was doing in France. I told him I was visiting family and was on holidays but it looked like he pretended he could not understand me.
“I was brought into a room with a lot of French policemen, some dressed in uniform and some in non-uniform.
“I was then told to place all items in my pockets on a table. I had my keys, my mobile phone and my boarding pass.
“One officer then attempted to search me. I told him I did not comply but did not resist.”
Conál was then taken to another room where he was asked to sit down.
“Two non-uniform French officers then told me to come with them through a door opposite from the door I had previously come in.
“They took me up a very wide corridor to a room and opened the door. The room had a long mahogany brown oval table with a lot of seats around it.
“I was told to sit on a seat at the left-hand side of the table but I ignored it and sat at the back of the room opposite the door.
“I asked why I was here and one of the men told me that I would have ‘good memories of France’.
“The door then opened and two men wearing plain clothes entered the room. One was chubby, white, with blonde hair and a side shade. The other looked either Pakistani or Indian, he was thin.
“The chubby white guy sat on my right-hand side and the other guy sat on my left-hand side.
“I was losing my patience and asked who they were. The chubby white guy replied in a strong Belfast accent, ‘Conál, you know who we are.’
“I jumped up and said ‘F**k off’ and walked out of the room. I walked down the corridor towards the room I was searched in and where my belongings were.
“The French policemen were waiting outside the door and ran after me in the corridor shouting, ‘Conál, stop’ and finally showed their police badges.
“I was very angry and asked them what they were f***king at- are you MI5 or Intelligence as well? They pretended they couldn’t understand me.
“They then took me to the search room to get my belongings. I took my belongings and they escorted me back to passport control.
“Just before passport control, they handed me back my passport and while I walked past the policeman at passport control, they followed me and shouted to me and my partner, ‘Enjoy your flight.’
“At the gate, I phoned my father to let him know that I was fine and told him what had just happened. I also contacted my legal team and republican representatives from the political party Saoradh. My legal team have been very helpful in this matter and have opened an investigation.
“I have since received texts of what seem to be clear offers to work for the crown forces or state agencies.”
Conál was previously charged with collecting documents and possession of articles likely to be of use to terrorists.
He was arrested after a bomb was discovered hidden behind a shop sign at the junction of Brompton Park and Crumlin Road in May 2015.
He was sentenced to 18 months imprisonment suspended for two years and had previously spent seven months on remand in Maghaberry.
Saoradh spokesperson, Dee Fennell has urged any other residents in North Belfast who are being harassed to come forward.