CLIMATE CRISIS: Brits are brill at bullshit but truly crap at real action 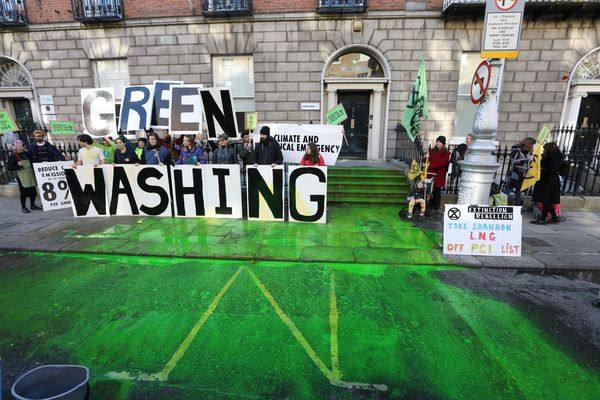 In less than 100 days, thousands of COP26 delegates will arrive in Glasgow for the latest United Nations convention on the climate emergency, hosted by Boris Johnson’s government. Judging by the recent G7 meeting, expectations that Johnson will bring the necessary leadership qualities to the event are very low. It is easy to see why.

A few weeks ago, the UK Climate Change Committee produced a report that basically said the Westminster government was good at setting distant future targets but hopeless at following through with actual policies and spending plans: good at the bullshit but unconcerned with delivery.

THREAD following today's Progress Report >We welcome increase in scale of Government ambition on climate over the past year. However, despite UK emissions falling to nearly 50% of their 1990 levels during the 2020 lockdown, the journey to Net Zero is far from half complete. (1/5) pic.twitter.com/48CBmR6YDe

There were many examples. The Committee has made over 200 recommendations that have largely been ignored, including carbon taxes on waste, taxation that makes train travel cheaper than flying, developing a functioning green homes scheme, new low emission building regulations, public information campaigns (including encouraging lower meat consumption), and installing many more electric vehicle charging points. Local authorities need £1 billion each year for the next 30 years just to insulate homes, which if targeted appropriately would mean that those living in poverty might be able to afford to keep warm in winter.

Overall, the Committee quite rightly argues that every government policy should be net zero carbon-proofed. We might go further and say that every decision should contribute to the reduction in CO2 emissions now. And why stop with government? Should not the whole of the private sector – not just the 1,000 largest companies – engage in carbon accounting and, more to the point, emissions reduction?

Instead, Johnson’s government is looking more and more embarrassing as COP26 approaches. It gave the OK to a new coal mine (now subject to a public inquiry) and has licensed more North Sea oil and gas exploration while other countries have decided to leave fossil fuels in the ground. But there is a serious problem here because countries that have stopped private companies from mining coal (e.g. the Netherlands) and drilling for oil (e.g. Italy) are being sued for loss of profits using a legal mechanism devised in the 1950s.

In just 100 days' time, world leaders will come #TogetherForOurPlanet in Glasgow to tackle the urgent threat of global #ClimateChange 🌏

Listen to the message #COP26 People's Advocate Sir David Attenborough has for them 👇 pic.twitter.com/5yTYpaxgvC

This period of decolonisation represented a potential threat to Shell and other oil firms which were worried that newly-independent countries might get ideas like nationalising natural resources such as oil, or demanding compensation for the destruction of communities and habitats. So they used a German banker and an English lawyer (who was also a Labour Party politician and prosecutor at Nuremberg) to devise a way of protecting their investments and who came up with ISDS, investor-state dispute settlement. ISDS is embedded in many international treaties between countries and extractive industries, and is designed to protect international investors, often trumping the rulings of national courts.

This year’s G7 meeting in Cornwall neither delivered on global Covid vaccine solidarity nor on climate finance, commitments which go back to the Copenhagen climate summit in 2009. Reinforced in the Paris Agreement  of 2015, the rich countries pledged to come up with $100 billion every year from 2020 to support low income countries struggling with climate change-related deforestation, desertification, famine, flooding and mass migration. The commitment was a victory of sorts for low income countries whose leaders question why they should be made to pay for global warming brought about by 150 years of fossil fuel exploitation by rich countries. So far the $100 billion target has not been met and Johnson’s arbitrary decision to cut overseas aid from the figure enshrined in UK law means he has zero moral authority in this matter.

The same argument about inequality and climate change applies at country level. Taxing carbon is seen by many economists as the main policy needed to bring down carbon emissions. But why should people with the lowest incomes be made to bear the pain alongside those with the largest incomes who have by far the largest carbon footprint? The attempt by France to raise carbon taxes backfired spectacularly with the 'gilets jaunes' (yellow jackets) protestors. Among other things, they objected to Macron raising fuel taxes while cutting taxes for the rich.

Other countries have managed to raise carbon taxes without creating a political backlash. They have done so in a number of ways but mainly by using the extra tax revenue to introduce compensatory policies. In some cases, such as Canada, most of the carbon tax revenue is shared out among tax payers so that everyone receives the same amount – a universal dividend. Those on low incomes and with lower carbon footprints gain from this while the richest ten per cent lose out. In Germany where recent floods inflicted over €1bn of damage on the rail system alone, carbon taxes are partly compensated for through lower energy prices, but overall, CO2 pricing is more of a burden on poorer households than richer ones.

Sweden first introduced carbon taxation in 1991 and now has the highest rate in the world: €116 per tonne of CO2 equivalent. It was introduced with the deliberate intent of switching taxes towards environmental concerns. Personal and other taxation was reduced to compensate. Sweden’s carbon tax rate compares to an effective Irish rate of €33.50 and a British rate of around £45 per tonne of CO2, established after post-Brexit independent emissions trading began in May. The Irish carbon taxes arise from the EU emissions trading system (ETS) which caps the emissions allowed in generating electricity (and other large scale operations such as steel production) and charges a price for carbon emissions which can be traded if unused. The taxes mainly impact on electricity bills.

“it is impossible for someone to lie unless he thinks he knows the truth. Producing bullshit requires no such conviction.” In other words, truth doesn’t matter to a bullshitter who pays no attention to it. Because of this, “bullshit is a greater enemy of the truth than lies are”

Two weeks ago, the European Commission published plans to reduce EU emissions by 55 per cent, relative to 1990 levels, by 2030. Obviously, these plans no longer apply to the UK but Johnson’s government will hardly be in a position to ignore them, certainly in the build-up to COP26. The EU plan includes the phasing out of fossil fuel subsidies, a carbon border 'adjustment mechanism' (tax) on imports of steel, aluminium and other carbon intensive products, a broadening of the ETS policy to buildings and transport, and the introduction of funds to support home energy efficiency and low carbon transport.

As mentioned, some countries have their own additional carbon taxes and plans to reduce emissions. The Republic’s Climate Action bill became law last week with the ambition to reduce 2018-level emissions by 51 per cent by 2030. The action plan for this, which will take a year to develop, will be confronted by major problems with electricity generation (not least because of huge demand from data centres), a powerful agriculture and meat industry lobby, and a history of urban development based on the car to connect people to work, education, shopping and leisure. Some critics argue that the last minute change in the legislation that allows for carbon removal to be part of the carbon budgeting process, will allow the agriculture industry and others to game the system.

Britain seems least likely to introduce new types of carbon taxes. Fuel duties have been frozen for ten years now and Johnson appears to be opposed to using taxes for public health purposes, as seen in his reaction to the National Food Plan published a couple of weeks ago. The Plan makes only fourteen recommendations, including proposals for a £3 per kilo sugar tax and a £6 per kilo salt tax to be applied to the food industry. The proceeds would be used to fund the expansion of free school meals. When asked about the sugar and salt tax, Johnson said “I’m not, I must say, attracted to the idea of extra taxes on hardworking people”. He doesn’t seem to like free school meals that much either.

Which brings us back to the deficit of policy-making and the surplus of bullshit. Fair play to the MP for Brent Central, Dawn Butler, for getting thrown out of the Commons for saying that “Johnson has lied to this house over and over again”. There is little doubt that Johnson misleads parliament regularly. But maybe, and primarily, Johnson is a bullshitter rather than a liar.

In his famous essay 'On Bullshit', the Princeton philosopher Harry Frankfurt argues, “it is impossible for someone to lie unless he thinks he knows the truth. Producing bullshit requires no such conviction.” In other words, truth doesn’t matter to a bullshitter who pays no attention to it. Because of this, “bullshit is a greater enemy of the truth than lies are”.

It is increasingly obvious that 'levelling up' is bullshit. The bridge between Co. Antrim and Scotland is bullshit. The Command Paper 'Northern Ireland Protocol: the Way Forward' contains large dollops of bullshit. But closing down hundreds of victim-led civil actions, preventing dozens of inquests, shutting down investigations into killings including those connected to the state’s use of informers, and amending the Official Secrets Act to criminalise investigative journalism – none of these is bullshit.