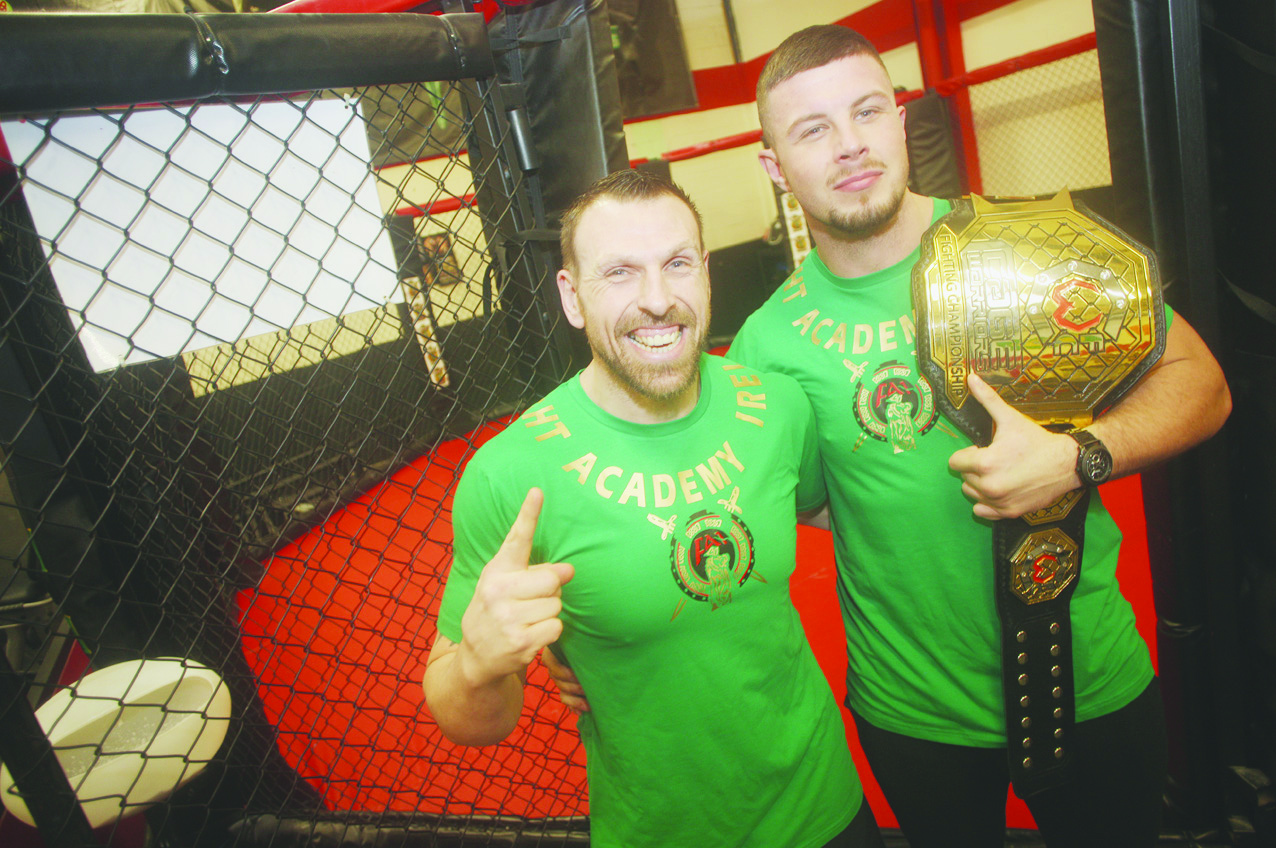 Cage Warrior light-heavyweight World Champion Karl Moore with his title belt alongside his coach Liam Shannon at Belfast’s Fight Academy MMA gym. Shannon believes his fighter has the talent to make it in the UFC

CAGE Warriors World Champion Karl Moore looks set to sign with the UFC (Ultimate Fighting Championship) in the coming weeks according to his coach Liam Shannon.

The Belfast fighter claimed the light-heavyweight title at Cage Warriors 81 at Dublin’s 3 Arena earlier this month with an impressive win over Josh Clark.

The Twinbrook native dominated his contest with the American veteran, earning a 49-45, 50-44, 50-42 decision on the judges’ scorecards. Moore’s win means he follows in the footsteps of Michael Bisping, who has since gone on to earn UFC honours as a middleweight.

Shannon, who coaches Moore at Fight Academy Ireland in West Belfast, insists his fighter is ready for the UFC.

“He was on the reserve list for the UFC event in Belfast but they couldn’t get anybody at his weight,” said Shannon.

“We ended up fighting at Cage Warriors in London and he knocked the guy out in the first round.

“Then he won the belt. He has already beaten two guys who are currently in the UFC. He should be signed up now. We are just waiting on the phone call.

He has proved now that he has the talent for the UFC. Getting signed up to the UFC is one thing but Shannon is adamant that Moore will be a success and says it is a matter of when, not if he gets signed.

“He should be in the UFC,” added Shannon.

“We have him over in America two or three times a year, training with UFC fighters. They know what level he is at.

“If he was a bit more outspoken on social media, he would already be there.

“We are hoping he will be on the next European UFC card in June – that’s what we are aiming for.”

Despite the popularity of MMA in the States and across Europe, the sport still struggles for acceptance – especially in the north of Ireland.

While the emergence and remarkable success of Conor McGregor has helped the sport break into the mainstream, Shannon says there is still work to be done.

“I have known Conor McGregor for years – he fought under me five times back when I was fighting,” said Shannon.

“He has helped the profile of the sport immensely.

“We are still trying to get recognised as a sport – we get no help with funding.

“We work hand in hand with boxing clubs but they can get £10,000 grants for new equipment. We have to generate our own money from classes and that.

“Hopefully the success of McGregor will see us accepted as a sport.”