Residents' joy as Mullaghglass landfill is due to close 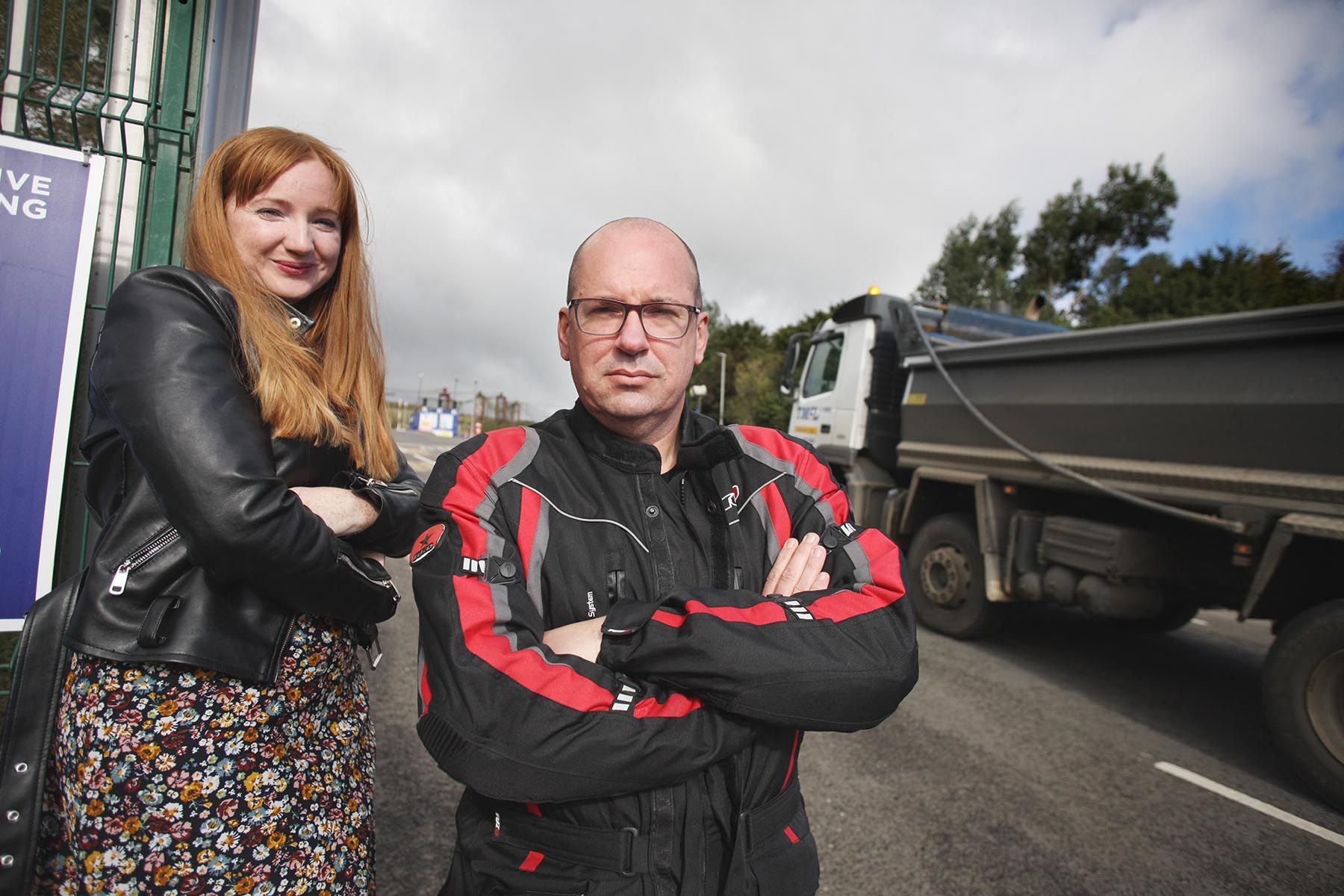 DELIGHTED: Residents Mairead Connolly and James McCarthy have welcomed the news that the landfill will close later this year

RESIDENTS who had called for the closure of Mullaghglass Landfill site on the outskirts of West Belfast have welcomed news that it is to close and be capped at the end of this year.

In recent years an unpleasant odour which had been plaguing the Colin area was traced to Mullaghglass landfill. Residents have complained that they've been unable to sit in their garden during good weather due to the stink.

The site was originally scheduled to close in October 2021 before being rescheduled to January 2022. The site has remained open after Lisburn City and Castlereagh Council extended their contract with them earlier this year.

In this latest development, Alpha Resource Management, who operate the site, have announced that that the landfill site will be replaced with 30,000 trees and that the waste gas from the site will be used to generate enough electricity to power 5,000 homes.

The landfill has been active since November 2006 and, once operations cease as planned, the entire site will be covered with an engineered cap and seeded to create a natural grassland habitat, returning it to its natural state.
Welcoming the move, Mairead Connolly from the Shut Down Mullaghglass Landfill campaign, described the announcement as being long overdue.

“We have been promised that the site would close twice before but finally it looks like the end is nigh,” she said.

“Residents like myself have been campaigning tirelessly for this site to be closed and we are delighted with this news.

“However, I find it ironic that the landfill is to be replaced with 30,000 trees which will purify the air. Despite this, it is a welcome move and one which I am sure residents like myself will appreciate when the work is finally complete.”

Mairead also thanked those who have supported the residents including local representatives and the press who have covered the story.

"I firmly believe that we would still be dealing with the odour if it hadn't been for our local representatives and the likes of the Andersonstown News who highlighted the impact this was having on residents," she said.

West Belfast MLA Danny Baker, who has been campaigning alongside residents for the closure of the site added: “I welcome this move and I wish it had happened earlier. It has been a long couple of years for residents living in the Colin area and a lot longer for people living along the Mullaghglass Road.

“We highlighted the impact that it was having on people’s wellbeing with all of the relevant agencies and the regulator, and it was very frustrating that instead of the site closing last year, we ended up with an extension.”

Danny said that the site also impacted residents financially when they couldn’t re-mortgage their homes because of their proximity to the site.

“I hope that lessons have been learnt from this and that it never happens to another community again,” he added.

Speaking as he announced the site’s closure, Alpha Managing Director Aidan Mullan said: “Alpha Resource Management is today announcing the closure and regeneration of the Mullaghglass Landfill site, as the site is now nearing its capacity.

“The site has operated since 2006 and has provided an important service for municipal waste disposal over this period.  The facility has been designed, engineered and operated to the highest environmental and industry standards.

“The regeneration process of closing the site will be as planned and we will work in close conjunction with all the relevant agencies, local authorities, and government departments to successfully achieve this. This will also enable us to further enhance the biodiversity of the site, as we create homes and healthy habitats for wildlife.”

Judy Meharg from the Belfast Hills project praised Alpha for the ongoing work which it has done in conjunction with the hill walkers.

“We’ve been planting thousands of trees over the past year, covering several hectares of land, which will be hugely helpful in terms of developing the biodiversity of the site and helping with carbon offset. Alpha have been fantastic partners to date, and we look forward to continuing to work with them on the regeneration of Mullaghglass to restore the site as a natural habitat for local wildlife,” she said.

Several biodiversity habitats have been created at Mullaghglass, which include wetland covering two hectares and the ongoing planting of native tree species and hedgerows within the site. These areas provide a secure habitat for over 40 species of birds, protected species such as dragonflies and newts, and many other forms of wildlife.