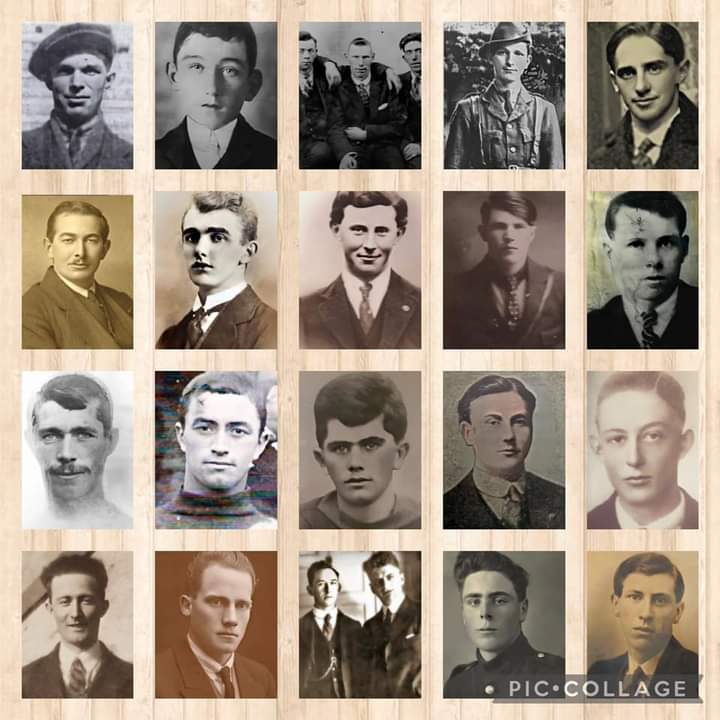 HONOUR: Some of the Volunteers included in the forthcoming book

A WEXFORD historian – co-author of a forthcoming book that profiles the Irish republican dead from 1916 to 1921– has appealed to the Belfast public to help fill in some gaps in the local Roll of Honour.

Shane Waters and Colum Ó Ruairc are set to release a ground-breaking new text that provides photos and biographies for hundreds of Volunteers and Sinn Féin members who lost their lives during Ireland’s most revolutionary period.

‘Sliocht Róisín – Liosta Laochra na Poblachta’ aims to commemorate the patriot dead of the time, many of whom have never been officially recognised.

Waters, a History and Politics student at Maynooth University, explained how the project grew from an online initiative undertaken with his friend Shane Lynch.

“It was the start of the centenary celebrations for the Tan War, and what we realised was that every now and then there was an anniversary coming up and there was no national marking of it at all,” he said.

“We set up a Facebook page for republican memorial tributes and we started doing them ourselves.”

When Facebook closed the page for alleged promotion of “terrorism”, the realisation sat in that they had “done all this work and we never saved any of it”.

Waters’ tentative efforts at compiling a substantive Roll of Honour were buoyed by the help of renowned 1798 historian Ó Ruairc. The pair then set out to compile a national list.

“The closest National Roll of Honour that has ever been done dates from 1985 by National Graves Association, and it’s just a list of names with very little info,” Waters said. “We started going through all the papers, all the military pensions, and we started building this monster of a book.

As for the state, you ran into problems in deciding who to commemorate. You had the civil war, and you also had the simple question of who is worthy or not. We eventually settled on if they’re on the nominal rolls and they died within the period then they’re going on.”

“We’re close to 2,000 names total from 1916 to 1925 or so. What we’re doing as well is making sure that it’s not this simple narrative of ‘he was shot’ – we’re making it very clear that we’re including people who died of disease due to their service, which is quite an undertaking because they were never really recorded properly.”

Waters said the absence of an accurate Roll of Honour can, in part, be explained by the fact that “no one really had the authority to do it outside of the state.”

The state, for its part, had a vested interest in excluding those anti-Treaty Volunteers who opposed partition.

“There was an attempt by the IRA to compile a full list in the 1930s, but it never really got very far,” he explained.

“As for the state, you ran into problems in deciding who to commemorate. You had the civil war, and you also had the simple question of who is worthy or not. We eventually settled on if they’re on the nominal rolls and they died within the period then they’re going on.”

The government in the 26 Counties never made “any particular effort to commemorate” Free State soldiers either, Waters maintains.

Politically motivated exclusions are just one reason for the dearth of names on the roll. Waters told how volunteers who died of things like the Spanish Flu are commemorated on certain quarters, but not in others.

As for the North, repression by the unionist and British state, as well as outbreaks of loyalist violence, meant that many records were hidden or even lost.

In Belfast and in the North in general there is a big gap, and my theory for that consists of two things. One is the burnings in 1969, and two, you can imagine that in 1970s having a framed picture of a Volunteer who was killed in action wouldn’t be good on the wall when the Brits come raiding.”

“With the Belfast Pogroms so much stuff was destroyed in burnings and there’s a lot of them that we don’t have family pictures for,” Waters explained.

“Recently in the Short Strand there was a plaque unveiled for a Volunteer called John Walker, who was killed in April ’22. What seems to have happened was that he was shot dead, but he was never really acknowledged on the Roll of Honour, even though the Short Strand has a very good history of that. We found him in the military pension files. I got onto the National Graves and they sorted a new memorial plaque for him. His relations knew he was a volunteer and never said anything for some reason. Sadly there was no picture found of him.

“In Belfast and in the North in general there is a big gap, and my theory for that consists of two things. One is the burnings in 1969, and two, you can imagine that in 1970s having a framed picture of a Volunteer who was killed in action wouldn’t be good on the wall when the Brits come raiding.”

Acknowledging the Volunteers’ sacrifices is one thing, but Waters’ and Ó Ruairc’s research add more colour to their story. The deceased are overwhelmingly “young men” of 18 to 24-years-old and from a “wide variety of class backgrounds". However, the majority seem to be working class.

“Labourer is probably the most obvious category," he said.

"We haven’t sat down and worked it through, but there definitely is a huge class dynamic to it.”

Interestingly, research has shown that the military officer class make up a large amount of deaths.

“Lieutenants and captains make up a huge amount of deaths compared to the number there would have been in a conventional military,” Waters said. “That’s probably because the ones who were most active were the ones likely to get shot.”

In this respect, social class also played a significant role. Waters said middle class volunteers, who were more likely to be IRA officers, “probably had more time to be at that kind of thing”.

“It’s hard to organise a local volunteer company when you’re out (working) in the field 10 hours a day,” he said.

“We’re trying to stay away from this whole ‘he died for Ireland’ and that’s all he was kind of thing. That’s why we’re doing the careers and things like that.

“We’re also looking at things like where their parents where from, how many sisters and brothers they had – there’s huge genealogy there.

“We’re also trying to find where they’re buried which is huge thing.”

When published, any money raised from the book will go towards further research and the upkeep of republican graves.

If you have an information or family photographs of republican dead from the Belfast area or elsewhere, get in touch with the authors at 1798rcd@gmail.com