New PIP system is set up to fail 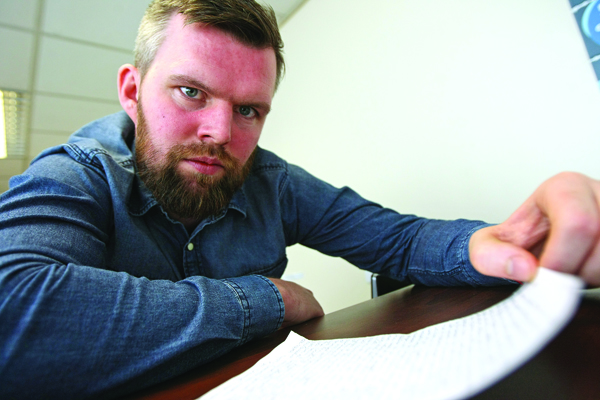 Gerry Carroll of People Before Profit reads a letter from a concerned member of the community about the new PIP benefit scheme.

A WHISTLEBLOWER who works on the controversial Personal Independence Payment (PIP) assessments has claimed that the system is set up to fail.
The claim was made in a letter which was sent to the office of People Before Profit’s West Belfast MLA, Gerry Carroll. The letter writer makes several other startling claims including:
n Managers have strict targets to get people off PIP;
• PIP assessors are not medically trained and should not make decisions on mental health issues and medical issues;
• Assessors ignore GP letters;
• Assessors openly mock people’s disabilities.
The letter states: “There is widespread dishonesty by PIP assessors from both ATOS and Capita (the private firms who carry out assessments).
“Assessors are not medically experienced people and some even make fun of people’s disabilities, it’s so sickening. It needs to be stopped and confronted.”
The letter then goes on to say how there are strict targets within the system to get people off benefits.
It reads: “Managers have strict targets for the number of PIP claimants they need to have off this benefit. This must be stopped and people who are ill should be treated with respect.”
People Before Profit MLA Gerry Carroll said: “I want to commend this person for coming forward and detailing how the inhumane treatment of people requiring PIP is having a crippling effect on the mental health of claimants – something I myself witness day and daily in my office.
“In the letter they wrote that it is not unusual for PIP assessments to contain inaccurate information, that claimants regularly present medical information from doctors which is left out of final assessment forms. They also report that medical experts have called their centre to angrily challenge PIP decisions that fly in the face of the medical evidence they have been asked to provide.
“This letter, though disturbing in detail, came as no surprise to me or anyone in my office. And since posting about this letter I have been inundated with harrowing stories of people being denied PIP and stripped of their benefits.”
Mr Carroll added: “The last (Stormont) executive who handed over these welfare powers to the Tories knowing too well that this would be the end result – because enough people pointed it out to them – should reverse these disastrous policies and have a welfare system that works for recipients.”
A spokesperson for the Department for Communities said: “The Department expects the highest standards from Capita who deliver the Personal Independence Payment (PIP) Assessment Service and Capita have to conform to a rigorous set of quality standards set down by the Department. Part of the Department’s contractual arrangements with Capita includes a requirement to have a robust auditing mechanisms in place which Capita have to adhere to. Capita complete their audits in advance of the assessment reports being submitted to the Department. The Department for Communities has recruited health professionals who are responsible for conducting independent audits of this.
“Whilst it is still relatively early days for PIP in Northern Ireland, the recently published information by the Department shows that 35% of PIP recipients in Northern Ireland are getting the highest level of benefit (£145.35 a week) compared to 15% of the working age DLA customers prior to its introduction.
“Capita’s role is to provide a professional assessment service. These professions include nursing, physiotherapy, paramedic as well as occupational therapy.
“There are no targets for the number of people who can or cannot receive PIP.”