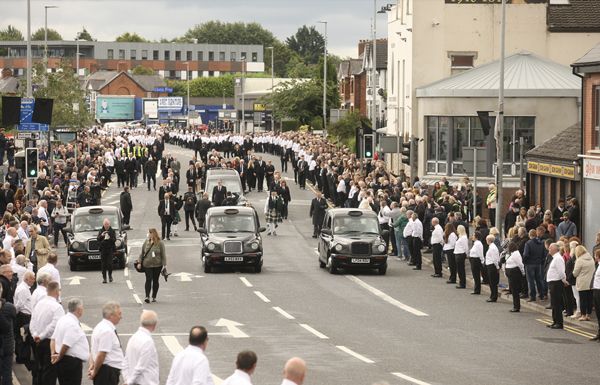 AN independent report has found that Belfast City Council was not pressured into allowing special treatment in the organisation of the funeral of Bobby Storey.

The report rejected claims of a republican “takeover” at Roselawn Cemetery, but that differential treatment of other cremations that day were “avoidable, unnecessary and completely wrong”.

The investigation by Peter Coll QC looked at why Mr Storey’s family were allowed to stand outside the crematorium at the cemetery, while eight other families were not permitted to do so.

10.30 @BBCNewsNI bulletin has the City Hall Bobby Storey report as its last item after eight months of obsessing about it across all platforms for controversy and clicks. By any metric, that's embarrassing. Bobby would likely have rolled his eyes and said, 'What do you expect?'

Mr Coll found that Mr Storey’s former status as a senior Sinn Féin member was not a “determining factor for the difference” in treatment on June 30, 2020.

His investigation, which was published yesterday, found no evidence that “Sinn Féin had applied pressure to have the change regarding committal services brought about”.

Mr Coll also concluded there was “no evidence of a takeover” of Roselawn by those acting on behalf of the family.

“At all times Belfast City Council staff were at the gate,” he wrote.

However, his report found the “differential in treatment should have been realised by all those involved on an organisational level.”

“The differential in arrangements for the cremations that day was avoidable, unnecessary and simply wrong and steps should have been taken to prevent the differential from arising in practice,” he concluded.

In July, Belfast City Council apologised to the families who were not allowed into the cemetery.

On Thursday, the Council’s Party Group Leaders repeated the apology and described the differential treatment as “unacceptable”.

“We will act swiftly to ensure that a repeat of such a situation occurring is avoided and that no other family would experience the hurt and pain of the families affected,” they said.

Senior Sinn Féin figures had drawn heavy criticism over their attendance at Mr Storey’s funeral as thousands lined the streets in the midst of strict Covid restrictions.

Sinn Féin Finance Minister Conor Murphy welcomed that the report found “no political interference nor pressure put on staff in relation to the handlings of these funerals”.

He added: “There were other families that used that service and centre that day and they have had trauma added to their pain, including the Storey family themselves.”