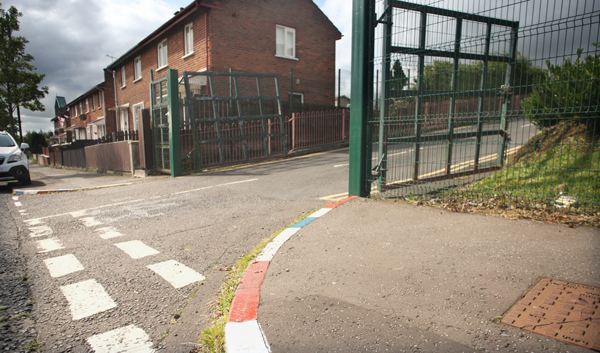 OVER a year after kerbs at the entrance to Holy Cross Girls’ Primary School were painted red, white and blue by loyalists the Department for Infrastructure is remaining tight-lipped over its promise to clear up the mess.
The kerbs at the school were painted in the run-up to last year’s marching season, but a community agreement to remove the paint was later reached.
In October last year, the Department told us that after being asked to remove the paint it was seeking the necessary funds to have the work carried out.
“The Department can confirm that it received a request for the removal of paint from the kerbs at the entrance to Holy Cross Girls’ School,” a spokesperson said at the time.
“As it has been established that there is cross-community agreement for the removal of paint from all kerbs in the area, the local Division is currently seeking funding to have the work carried out.”
The North Belfast News has spent a week trying to obtain an update on the state of play – but we have received no answer to our queries.
There was widespread disappointment that the paint wasn’t removed in time for the children returning to school last month and local people are still in the dark as to when the paint will be removed.
North Belfast Sinn Féin Councillor Ryan Murphy said: “It is unacceptable that the kerbstones at the front of Holy Cross Girls’ School have still not had red, white and blue paint removed from them.
“A commitment was made long over a year ago for this to be done yet the paint is still there and a new school year has begun.
“We are now seeing tension around the interface areas in North Belfast decrease, in line with this the Department should act and remove this paint, which was done in the summer of 2017.
“ I have written to the Department for Infrastructure to ask why their commitment was not followed through and for them to provide me with a timeframe for this work to be finished.”