Oh, for just the tiniest bit of piece and quiet 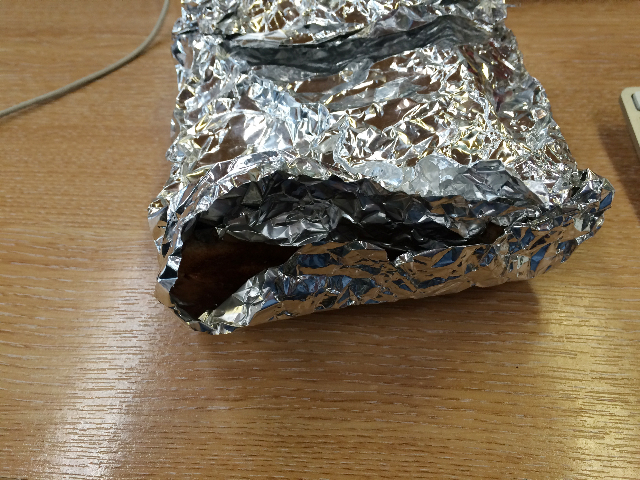 HERE’S Squinter’s lunch, above, in a picture taken on his mobile phone on Monday. At lunchtime, funnily enough.

What the hell is Squinter doing taking pictures of his piece?, Squinter hears you cry. And you’d be right to be curious and scathing in equal measure. But houl’ yer hand on the shafts, as Squinter’s da used to say, and listen to this for a tale of infamy and outrage before you blithely assume that your correspondent is a sandwich short of a picnic.

Squinter brings a packed lunch to work maybe two or three times a week. Most times it’s sarnies, occasionally a bit of leftover pasta or stew in Tupperware. Squinter doesn’t hold with these new-fangled ziplock sandwich bags, preferring the tried and tested tinfoil. Arriving in work of a morning, he places the neatly-folded silver rectangle carefully in a corner of the kitchen fridge before making a cup of tea and taking his seat for another day at the coalface.

And after four hours of diligent labour, Squinter makes his way to the kitchen for another cup of tea and to retrieve his sandwiches from the fridge. Except, very rarely does he find his lunch just as he left it. You will notice that in the picture the tinfoil is no longer neatly folded. You will notice that in fact the edge has been lifted to form a viewing hole. This is because somone at some time over the course of the morning has opened the fridge, had a nosey, spotted Squinter’s piece and decided to investigate.

Now in the grand scheme of things, and particularly with the world in the state it’s in at the minute, this is not an earth-shaking problem. Squinter understands that. But he can’t help himself: when he discovers that somebody’s been juking at his sandwiches he’s filled with the kind of fury that rules out rhyme and obliterates reason.

Did whoever opened the tinfoil stick his or her finger in? Did they have a sly smell? And if so, there must be fairly considerable health and safety implications in any decision to go ahead and eat the sandwiches anyway, which is what Squinter invariably does (angrily imagining summary execution scenarios as he slowly chews his food like a sullen cow in a field).
Squinter went ahead and ate these sandwiches too. Cumberland sausages with Colman’s mustard on wholemeal, if you must know. One of Squinter’s favourite lunches, if you must know. But it’s hard to enjoy fully even a gourmet feast like that when you know someone’s been rooting and sniffing around in there.

Fridgecam, a patient colleague suggests as Squinter gives off bitterly and at length for the umpteenth time about the office lunch raider. Easily done, he adds, for you’d be amazed at the quality of picture you can get on a tiny little device for very little money these days. And Squinter has to agree that the idea of catching the culprit in the act is very attractive. But just as he’s about to log on to the Acme Spy Products website, the colleague adds: “Stick a mousetrap in there too.”

Sellotape it is, then.