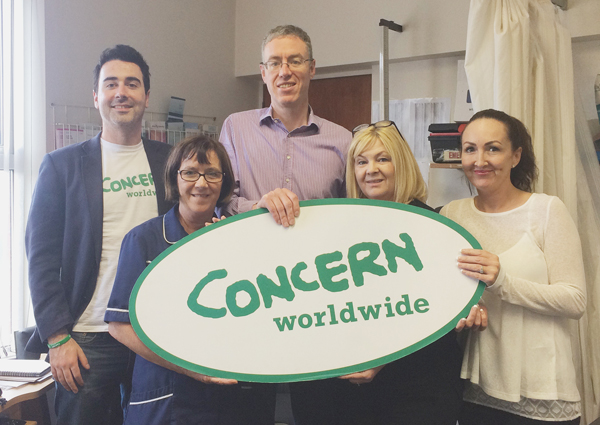 A NORTH Belfast GP and doctor to the Belfast Giants has smashed his marathon fundraising target for charity.
Dr Mark McCrory was hoping to raise £2,000 for aid agency Concern Worldwide after running the London Marathon earlier this year. But so far he has topped the £2,800 mark – with donations still coming in.
Mark has credited the success of his fundraising efforts to the generous support of patients at his Oldpark Road surgery.
“They helped out immensely in raising awareness about what I was doing and about Concern as a charity. Because of that, patients were incredibly generous with donations and well-wishes. I can’t thank everyone enough.”
A keen sportsman, Mark is a former county footballer with Armagh and Antrim and was a member of the St Galls All-Ireland winning team in 2010. He is a specialist in sports injuries and is currently team doctor to the Belfast Giants.
Mark finished the 26.5 mile marathon around the streets of London in four hours and 17 minutes in April. And ever since his running success, he has been fundraising for Concern, the international development charity that works with the most vulnerable people in some of the world’s poorest countries.
“The London Marathon was an absolutely amazing experience,” he added. “I was delighted to be able to support such a worthwhile charity and hope to do it all again next year.”
If you’d like to follow in Mark’s footsteps and take part in the 2018 London Marathon for Concern, contact Órla Clarke on 028 9026 1516 or orla.clarke@concern.net