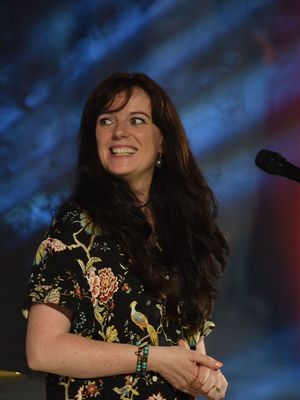 AMAZING GRÁINNE: Performing in Clonard Monastery in 2018, Gráinne Holland returns to the venue tomorrow night for a virtual Féile gig.

WEST Belfast singer Gráinne Holland will step onto Clonard Monastery’s stage tomorrow night (Tuesday) as part of Féile an Phobail’s virtual festival, an occasion she didn’t think would happen as Coronavirus lockdown measures took hold back in March this year.
Gráinne recalls how she had been on tour in Germany when Covid-19 restrictions came into effect forcing her and her crew to cancel their tour and return immediately back home where she discovered she had contracted the virus.
“We got sent home straight away, our tour was cut short and it was soon after that I was told that the symptoms I had were Coronavirus,” she said. “I was never given the test as this was back when people weren’t being tested but I had all the symptoms.
“I felt unwell on the way back home; I had a high temperature, sore head. I had already told my husband and children to leave the house and to go and stay with his mummy at her house.

Always one of the best nights at Féile @ClonardMBelfast https://t.co/ISCPlNp0x2

“I spoke to the doctor and he said to me it sounded like I had the virus, I’m asthmatic as well so it was a really awful, scary time,” she said. “I kept thinking to myself ‘is this going to get worse?’ I was very lucky in that it did clear up and go away. Another girl I was performing with fell ill as well and she was very ill for three weeks with it, it was totally insane. I just thank God that we are through this and all is okay.”
No stranger to performing as part of Féile an Phobail, Gráinne said that this will be her fifth time on the Monastery stage.
“I will be performing with Rioghnach Connolly from County Armagh and Bernadette Morris.
“With Clonard, before Covid-19, it was always a very specific gig, always a sell-out gig, always the same people that go. Even if I’m not performing, I would always go to it. The acoustics in Clonard are amazing, so many people love it, when you go to hear the music it’s just a different experience on its own.
“Féile are going to recreate the concert experience for people at home. It’s totally different this year but Féile are doing a brilliant thing in that they are making sure that people get their Clonard concert experience to their home or wherever they happen to be watching from.”

Gráinne spoke of how hard the current live music scene has been for musicians.
“I don’t do music full-time but for other people who do they have completely lost everything. Some of the people performing at Clonard, this will be their first gig in months and they are usually flat out. It’s very hard for them getting the work. I think they feel they’ve been left behind, that their profession is bottom of the list of people who need help. At the end of the day that is how the arts are always treated, that they are not a necessity, so it’s alright – but they are a necessity.
“What would we do without art, without music, without creativity, we all need it in our lives and the government aren’t providing artists with any help, it’s terrible.”
For those tuning in to the concert on Tuesday August 4 Gráinne will be performing tracks from her latest album Corcra along with Brian Finnegan and Eamon McElholm, “two class musicians”.
“I’m just really happy, this will be my first time on a stage since March. I didn’t know if that was going to happen again. Féile are giving a concert in this setting, a different setting for the first time, virtually. I think all those who are performing on the night are feeling brilliant in that it’s a case of ‘oh my God, it’s not gone’, we are still able to do this and let people hear the music.”

Gráinne will perform at the Cultúrlann as part of Virtual Féile on Friday July 31 on their Facebook page.  The annual Féile Clonard Monastery Concert will be available to view on the Féile an Phobail website on Tuesday August 4 at 9pm.