ONH urge those on drugs list to own up 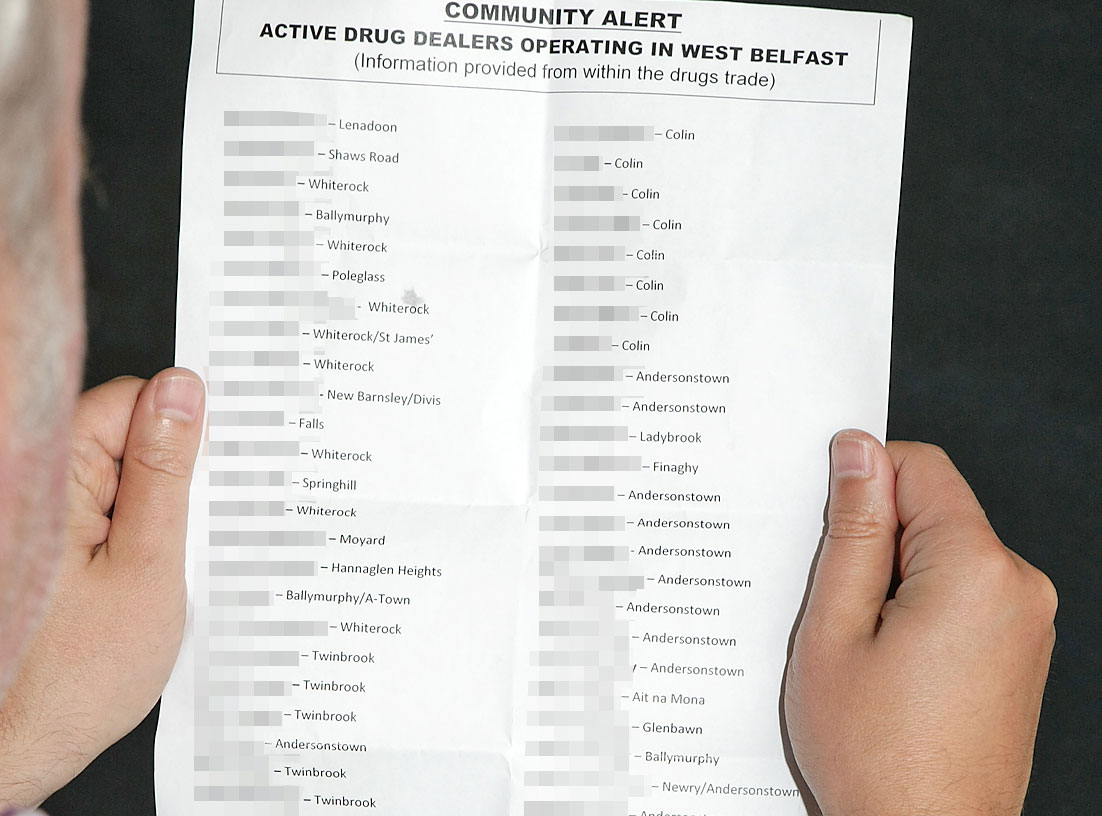 óglaigh na héireann has confirmed to the Andersonstown News that they issued the list of 54 alleged drug dealers that’s currently circulating in West Belfast.

The republican group say the list was put together after “a six-month investigation of  the local drugs trade”.  While the group did not refer to any form of punishment for those named on the list, they insist the warning is genuine and have urged the 52 men and two women named to come forward.

“The names were compiled following a six-month investigation of the local drugs trade,” the ONH said in a statement.

“The individuals highlighted were those whose identities kept coming up, being provided by numerous other drug dealers who came forward.

“Those on the list should stop living in denial.  Some have already come forward, admitted their role, distanced themselves from the drugs trade and left with a fresh start.

“We suggest the rest do the same. Those who come forward and admit will receive a sympathetic ear and the help they need to break free from their suppliers.”

A number of A4 sheets with the names printed on them were thrown from a car window in Poleglass in the early hours of Monday morning, while others were posted through letterboxes in Ballymurphy.

The circulation of the list in recent days has been criticised by some, who say it is putting lives at risk.  There are also concerns around the seniority in the drugs trade of those named.  Known top-tier drug dealers who have been running the drugs scene here for over a decade are notable by their absence from the list.  The vast majority are believed to be young people who may be involved at a low level, selling to friend and acquaintances, although one drugs importer is also named.

West Belfast MP Paul Maskey drew attention to the claim on the list that it was compiled from information provided by people in the drugs trade.

“The people who did this should be ashamed of their actions,” he said. “I think whoever did this is totally irresponsible and they should come forward and explain why they it.

“People have come forward and said their sons’ names are on this list and they are totally innocent. They have been involved in no dealings with drugs and some haven't even been involved in the taking of drugs.

“Whoever is behind it is pathetic because they have put people at risk, people who are fearful that they could be attacked because their name has appeared on the list.”

Gerry McConville of the Falls Community Council acknowledged the drugs problem in the West of the city, but said the list will only make things worse.

“This is absolutely the wrong thing to do and will do nothing to alleviate the drug problem in West Belfast,” he said  “Of course there is an issue in the area, like there is in most other areas, but this will do nothing to address that problem, in fact it will make it worse. Most of the people named on this list are teenagers and many are very vulnerable. This list only further isolates them, stigmatises their families and makes them even more vulnerable.

“The PSNI needs to address the issue of drug supply and availability, but as a community we need to offer support and practical assistance to any young person and their family who are suffering from drug misuse.”

Anyone seeking help with drugs are invited to contact the Falls Community Council’s Community Drug Programme which offers individual and family support.  The number is 90 202030.