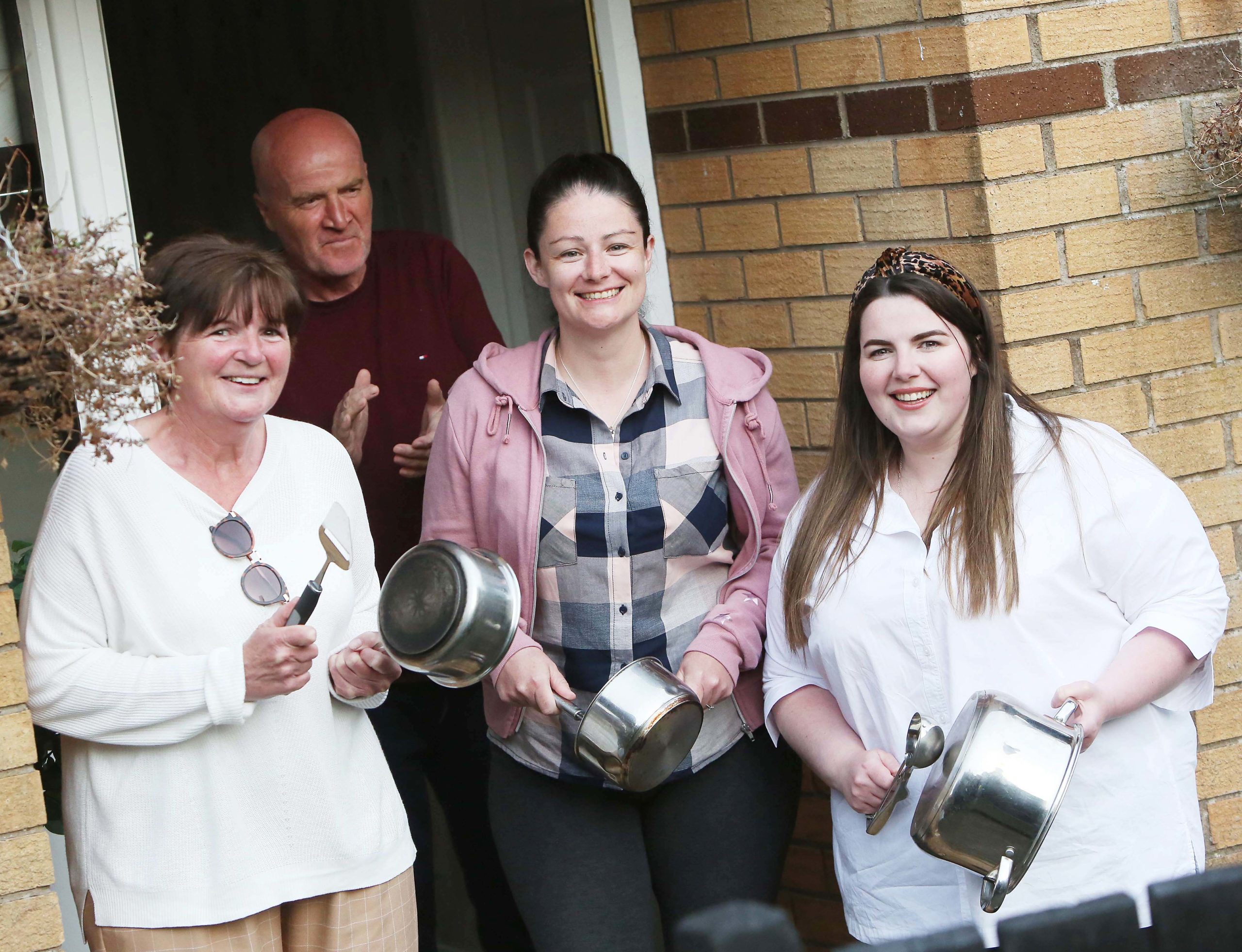 IN THIS TOGETHER: Residents of Woodside Walk in Poleglass support the Clap for Carers salute last Thursday pictured: Rebecca Murphy, Geraldine Murphy and Louise Reynolds 2304JC20

THOSE of us advocating a unified Ireland know any meaningful discussion involves the Health Service on the island.

Discussions on health stem from those living in the north seeing universal, free health care as a plus and will be very up front in not wanting to lose it. It is worth noting that our health care is not provided by the NHS but by the HSC – in 1948 the Stormont Parliament did not adopt the NHS after the Beveridge Report, called it something else, and included social care. The NHS only operates in England and Wales, although of course universal free health care is available here. So, no matter your constitutional preference a ‘National’ Health Service is something to aspire to.

This issue comes into sharp relief as jurisdictional policies responding to the Covid-19 crisis have fundamentally differed. The south fell into line with international best practice, engaging in testing and contact tracing and introducing social distancing and lockdown early and quickly. In the north, though, being under British jurisdiction meant lost weeks of testing or distancing, and political rows after Sinn Féin broke the do-little consensus on  March 13.

"The fantasies of British exceptionalism." This brief Guardian editorial highlights the north/south difference in death rates in Ireland while pointing out the delusional fantasies of the UK government. A good read: https://t.co/p5MF9kU13s pic.twitter.com/IuiMtfpMFF

Last week there was pondering on why the north’s death rates are much lower than those on the island of Britain. Opinion included that it’s because we’re less densel populated, or don’t have a Heathrow. Rarely mentioned was the fact that we live on a different island. This meant that irrespective of London dithering, from the border up into the Craigantlet Hills, people voted with their feet from early March and began to isolate like their southern neighbours. Schools were seeing significant fall-offs in attendances, the GAA closed pitches and workplaces went remote in full concert with the south.

We’re now entering a new phase in this pandemic nightmare. Relaxing restrictions will have significant risks attached. We all want, need, schools up and running, workplaces buzzing, and our loved ones close again, but the risks are so high. The only answer seems to be testing. Testing everyone. Find those who have it, get them isolated, and keep robust testing up until there is a vaccine. So, no return to what went before but the end of the current hibernation of the economy and our family lives. IF we test. On an all-island basis. Dr Gabriel Scally, President of the Epidemiology and Public Health section at the Royal Society of Medicine, has pointed out that having two regimes on the island is pointless, and unless we want a hard second wave we need a concerted effort to align the two jurisdictions’ medical and societal responses. Makes sense.

Of course, there will be those who worry that this makes an all-island health care system more feasible and undermines constitutional arrangements as they stand. But I imagine it will be the same people who dismissed concerns Brexit is harmful to our island, or who went along with the ‘herd immunity’ theory and branded calls for lockdowns irresponsible. And pretend our Health Service is the same as Britain’s. They are in a poor position, but they need to demonstrate an alternative which will secure the health of the population in the island’s two jurisdictions.

Because right now only a long term all-island response will ensure our children will have a decent chance of having grandparents to share Christmas with.

Our home page photo (and below) shows the Murphy family of Woodside Walk in Poleglass supporting the Clap for Carers salute on Thursday 23 April. Pic by Jim Corr.