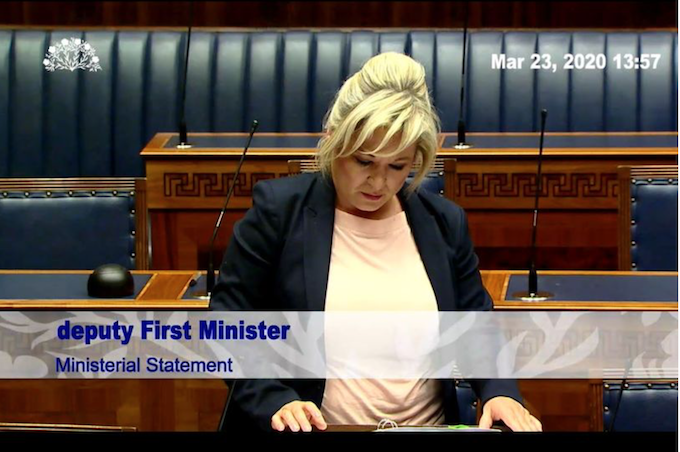 Michelle O'Neill at Question Time in the Assembly on 23 March

When Michelle O’Neill paused in her answers to the Stormont chamber this week, she reflected heartfelt concerns in these days of uncertainty.

Jim Allister had asked her about his constituent, a woman of 32 years with a young child, whose treatment for cancer has been upended as the Health Service tries to meet the challenges presented by Covid-19. He asked her what he should say to her.

Michelle O’Neill has been engaged with the facts around this virus. The fact that it is spread by contact. The fact that it is merciless when it finds the right victim. The fact that when it meets some people modern medicine is very limited. The fact that many people will be killed by it. She has seen documents we only learn exist in Sunday papers, which outline scenarios which speak of thousands. Thousands of sick. Thousands of dead. Briefings which speak of a Health Service, already depleted and not coping with current demand. A Health Service which needs to make choices in this climate. Choices that are unconscionable.

In the face of those papers, discussions and briefings Michelle O’Neill has broken the consensus of delay from Executive government. She has demanded more action. First with saying schools must close, then saying there needs to be comprehensive testing, then saying there needed to be limits to freedom of movement.

Since her installation as ‘Leader in the North’ of Sinn Féin, then Vice President, I’ve felt we hadn’t had the opportunity to hear her authentic voice after being thrown into consecutive elections, a cold war with the DUP and the Brexit crisis. The change in Sinn Féin’s leadership meant her voice was less amplified as a new President asserted hers. Michelle O’Neill could well have been a victim of circumstances had John O’Dowd’s challenge to her position gained momentum.

This month, however, we hear her voice. And when it broke with emotion in response to Jim Allister’s question, we heard it more clearly. She hadn’t dismissed the MLA’s question as many might, she clearly saw the woman he spoke of. She saw her and reached out to her, in the limited way she could, with heartfelt compassion.

Some of the media presented that as “breaking down”, or the crisis “taking its toll”. They have learned nothing and fell headlong into gendered stereotypes. Far from being “overcome” Michelle O’Neill stood right back up and continued answering questions. She went out later that day and announced parents on lowest incomes will get the dignity of money into their pockets to feed their children instead of missing free school meals. Money to pay for food. A woman in politics noticing the regularly disregarded and making change.

After Sandy Hook in 2012 US President Barack Obama unashamedly displayed his own emotions in response. The media did not say he “broke down”. They did not say he was “overwhelmed”. Or that responsibility was “taking its toll”. It was presented as his compassion, empathy and “real men do cry”. Notice what is different?

Women will do politics differently. Their responses are sometimes different too. And that should be welcomed. But even when those responses are the same their treatment is definitely different. The virus of anti-women tropes never gets socially distanced though.