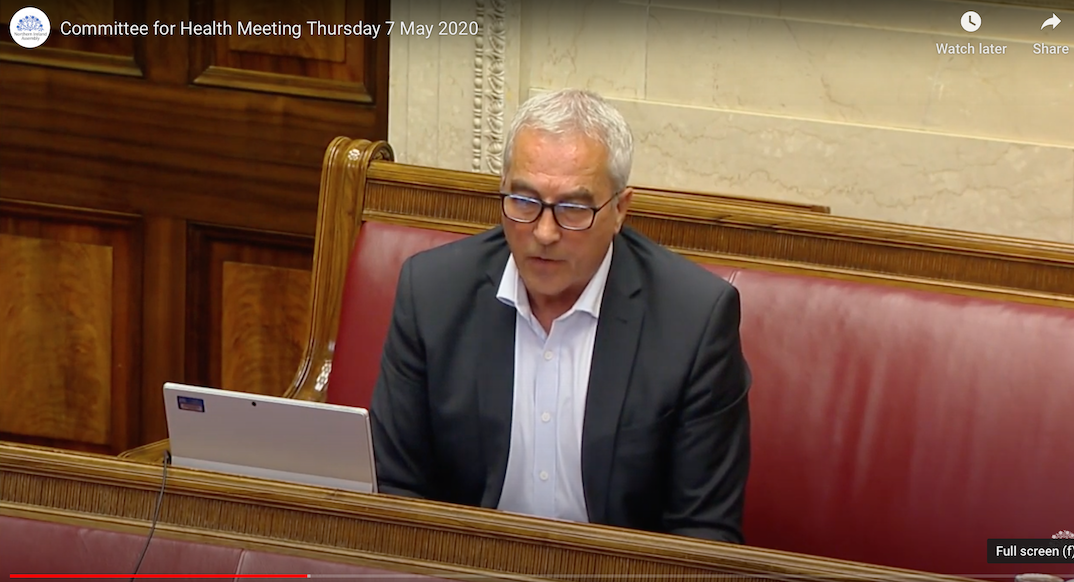 The Health Committee at Stormont met yesterday to deal with the Covid-19 crisis and to advise the Minister — and boy does he need advice, being tied to the approach of Boris Johnson's government which has the worst number of deaths from the virus in Europe.

Care homes deaths of our nearest and dearest relatives dominated yesterday's discussion. How many elderly in care homes with symptoms of Covid-19 or a positive antigen swab test were admitted to the BCH ‘Nightingale’ Tower Hospital or to ICU Covid in the Mater?

At Health Committee today I challenged the interim CEO of the Public Health Agency about her evidence on April 16 when she told us, “we have recruited 500 people who are currently being trained” to do contact tracing. She now says she may have “misspoken”. UNACCEPTABLE!

I suspect that the answer may be, none  and to hide these scandalous facts the Public Health Agency will talk about a ‘smoke and mirrors’ tracking App. Such an App might work on the rarified Isle of Wight (Tory Majority 21,000) but not on the Falls or Shankill where 80 per cent of the bluetoothed iPhoners  might be hard to recruit when what they really want is antigen swab testing and what they need is Roche Alive antibody testing. This would show immunity to further infection with Corona and allow them to get back to work with Bus Éireann to Dublin or Aer Lingus to London.

I don’t agree with waiting. RHI turned out to be a puff of smoke. People are dying on a daily basis. Can we trust what we are being told? There are those in authority who knew how bad the situation was in Care Homes but??? https://t.co/BRda7UM8h9

Pat Sheehan (Sinn Féin) accused the Public Health Agency of "lack of preparation of the pandemic in terms of the havoc it was going to wreak in residential care settings and other health care settings". But when he asked the vital question, how many residents were transferred to hospitals since the outbreak started, Prof van Woerden failed to answer him at all. When the question had to be repeated by the West Belfast MLA, Prof van Woerden said he "didn't have that figure to hand" but would come back "in a while".

The exchange with Olive Macleod was astonishing, Pat Sheehan (starts at 1 hour 12 minutes on the video), reading from the Hansard record, reminded Ms McLeod that she had told the Committee on 16 April that "there were 500 people who were currently being trained for contact tracing". He asked, "how is that training going?" Ms McLeod said PHA estimated they would have "to identify 500 people to train". However, Pat Sheehan interrupted her to return to the minutes of the 16 April meeting: "You said, and I am going to quote..'we have recruited 500 people who are currently being trained (for) contact tracing'." Ms Macleod responded: "I spoke out of turn. That's incorrect."

The cost of Minister Swann's decision to link our response to Covid to the British is considerable.

The there is the Brexit-related shorteage of Probanthine, Morphine, Profolol and maybe even French insulins because of DUP tagging along with the arch-Catholic Rees-Mogg.

'We' wouldn’t buy the ventilators from Germany or the Oxygenators in Galway and preferred to make them in the shed for our nearest and dearest.

The Brits don’t talk about things they do not have like face masks for everyone. Just as they didn’t talk about PPE because they did not have enough for OUR care home nurses.

It is clear that members of the Health Committee are tiring of the verbosity of our top health officials. Members wanted to know what was happening in our 184 care homes.

Perhaps public health doctors should be in care homes instead of holed up in Linenhall Street? As the Germans have effectively demonstrated, de-centralised public health works. Conversely, we centralised our service some years ago into a very Belfast-centric agency, the PHA.

PHA were continually asked about testing at the committee but gave no satisfactory answer.

Olive McLeod was asked about contact tracing and admitted having  ‘misspoken’ to the HC on 12 April.

PHA say they ‘have done well’. They downplay testing because they did not have the capacity but now say they are to do more. Prof van Woerden was asked about EU workers but spoke about fishermen. After another verbose and obfuscating reply about RQIA, the exasperated Colin McGrath of the SDLP said it was a good answer but not to the question he had put.

Members kept coming back to European Centres for Disease control guidance — so no Brexit acceptance at the Health Committee.

Alex Easton, DUP, was observed by the BBC shopping-on line during the séisiún (in fact, during the exchange between Pat Sheehan and Oliver Macleod) and had to write an apology.

Fair play to the DUP's Alex Easton. He did the #ClapForCarers tonight and at the same time managed to buy 6 pairs of Union Jack socks