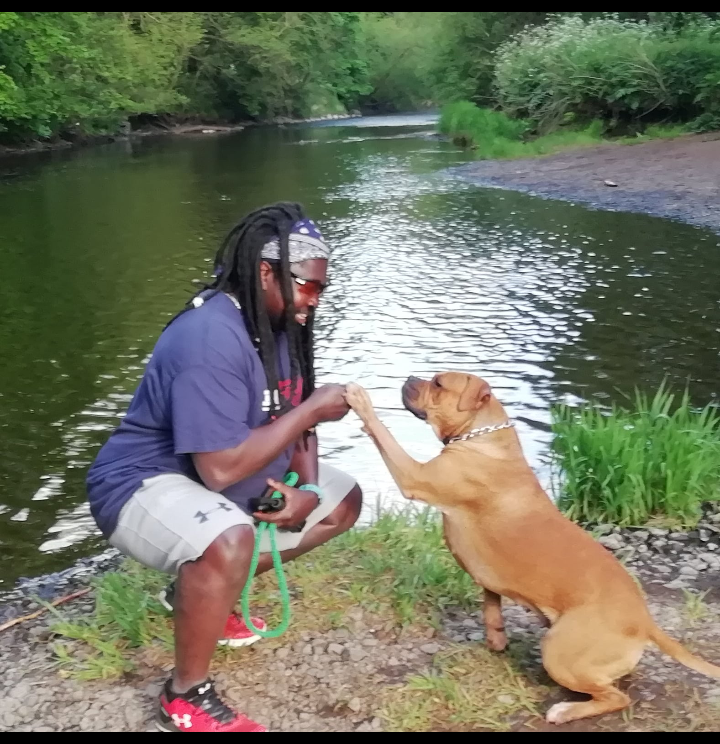 SHAKE ON IT: Big David with his beloved Lady
WHEN David Waigo was a child, there was a brutal war raging in the Arua region of Uganda where he comes from. Gun battles raging and bombs shelling the entire place.

His family were given refuge by a Christian mission in the area. Children, mothers, the elderly and whole clans had nowhere to run.

At seven years old, Daudi (Swahili for David), who is known by many in Belfast as Big David, says they used to run around in the remote refugee camp doing anything children would do to keep their minds occupied.

They were out of school during many times of the war, constantly on the move, people suffered. These were the early 1980s.

“I was seven years old. During the war, I noticed one unique thing. There were animals not being tended, stray dogs were everywhere, sometimes in the groups of ten or fifteen, it was mad. Dogs with no-one to look after them scavenging for food where there was hardly any, some were injured, others looked sickly and puppies were there too, the lot!

“One evening we were playing away from the campsite and we saw a pack of dogs, they looked menacing, hungry and tired. I didn’t know whether we should stay or move. We decided to just stand there and from a group of them, not even barking, one came and started licking my dirty legs. You see, we were playing in mud. I took this dog and named it Boxer, went home with it to the refugee camp. I thought I would be stopped but it was no big deal. This was for me my first real closeness to dogs, an amazing experience in a difficult environment and out there humans were killing each other.”

So there he was – a dog called Boxer bringing joy to small Big David. Not long after, things calmed during the war and David returned to their family home, his canine love Boxer was run over by a car in the nearby town. David cried his eyes out. It was painful.

“I gave the dog a proper burial like never seen before, my family and the village supported me. Not many African families would do a cultural and personal funeral for a pet but I did.

“I have been in Belfast for over twenty years now. My cool dog here was called Charlie. He was a Japanese Spitz. I am talking in the past tense because he died about five years ago. When people spotted this lovely white spitz running about the park with me they loved to see him.”

A long while after his passing on, David found it difficult to replace the dog.

“You don’t replace a dog like Charlie, he was a prince, everything you could wish for, I have hundreds of pictures stored on my phone of Charlie.

"Lady is my new dog, she has  been the love of my life since I got her during a sad, lonely time, December 2018. I was sitting at home here in Belfast, so lonely and so far away from Africa.I was going through a lot of mental depression and instability in family life. Then Lady came.She brought me a lot of HOPE this dog. Please put that word in big letters.Saved my life. I hope Lady behaves herself and stays for as long as time will allow, she is young and strong. But she is scared of wee dogs and animals.So many things about her is like a lady. My boys adore this dog and they do spoil her.

"She is a house dog, but in Uganda she'd probably run amok in the fields with other dogs hunting for food. It is survival there. When I came to Ireland it shocked me the amount of money people were willing to spend on their pets. At home in Uganda we gave the dogs leftovers from the butcher's, local schools and restaurants or from neighbours.There were no shops selling dog food in my village."

Big Dave's wish is that Lady learns to stop being scared of wee Jack Russells.

AT LAST, A BENEFIT OF LOCKDOWN


IN the household of Leila Hashim, something new is happening right here in County Antrim. Hurray! The children have learnt how to cook. When they are not helping her to clean the garage and the rest of the house, the teenagers are busy exploring Jamie Oliver's recipes.

They are baking as well in between playing cards, board games and exercising together. It is full on for this family.

As Muslims, the family are keeping with the spirit of Ramadan. They are doing healthy iftar (the evening meal with which Muslims end their daily Ramadan fast at sunset): vegetable soups to start with, then a healthy main meal.

Elly Omondi Odhiambo is a Kenyan writer based in Belfast.