OPINION: It's not Assange but the war criminals he exposed who should be in jail 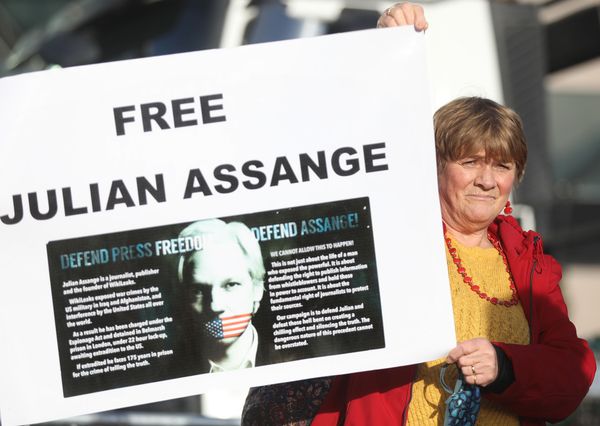 HOSTAGE: Anne Conway, head of the Free Assange Ireland Campaign, at a protest outside the Dáil in December of last year. 24 TDs have opposed extradition of Mr Assange to the US. rollingnews.ie

The Australian Julian Assange and WikiLeaks were a top team of journalists. Both in terms of scoops and global political impact they exposed the barbarism of the 21st century’s “never-ending wars”.

WikiLeaks was founded by Assange in October 2006. It is an online platform for whistle-blowers guaranteeing anonymity. It seeks "principled leaking” to combat high-level corruption.

In 2010 came the Baghdad airstrike Collateral Murder video recorded by two US Appache Attack helicopters as the pilots slaughtered 18 innocent civilians. Followed by the Afghanistan war logs then the Iraq war logs. Assange, acting as a journalist and publisher in coordination with media outlets worldwide, exposed major war crimes by US forces and its allies.

Yet, the mainstream media worldwide, including in Ireland and Britain, have ignored both the case and the persecution of Julian Assange. The European Parliament refused to voice its concern and Ireland’s Minister for Foreign Affairs has declined to answer questions in the Dáil.

As John Pilger revealed, by 2008 the US State Department was plotting to silence and criminalise both. In August 2010 while visiting Sweden Assange was accused of two rapes. The investigations were later dropped when it transpired the Swedish police had constructed the rape reports. This was the typical smear tactic, aimed at turning public opinion against the WikiLeaks editor. It was soon followed by a dubious US warrant to arrest him under the Espionage Act 1917.

This led in 2012 to Julian Assange seeking political asylum in Ecuador’s London Embassy. He knew to return to Sweden would result in his extradition to the USA and a life-long jail sentence. After seven years confinement in the Ecuadorian embassy, Assange was arrested and treated like a dangerous criminal. For two years he has been on remand in solitary confinement in Britain’s Belmarsh high security prison facing extradition to the USA as a spy.

Last January 4, in the Old Bailey Julian Assange was found guilty of spying. However, the judge opposed his extradition on the grounds the US penal system’s harsh conditions would lead to Assange committing suicide.

That judgment leaves open the door for a US administration to initiate similar indictments against journalists across the globe. The NUJ stated: “It is our view that the use of these judicial measures by the US constitutes a grave threat to free speech and a free press ..the charges seek to criminalise activity that for many NUJ members is their daily work - cultivating sources who are willing to share sensitive information that reveals incompetence, corruption, and illegality”.

The US immediately appealed and in the coming months the case will come before the British High Court. The Assange legal team will also appeal the judge’s guilty verdict.

Yet, the mainstream media worldwide, including in Ireland and Britain, have ignored both the case and the persecution of Julian Assange. The European Parliament refused to voice its concern and Ireland’s Minister for Foreign Affairs has declined to answer questions in the Dáil.

The real scandal is that the proven war criminals are not on trial. Instead, Julian Assange, who exposed their atrocities, has been persecuted and prosecuted and faces a prison sentence of 175 years.