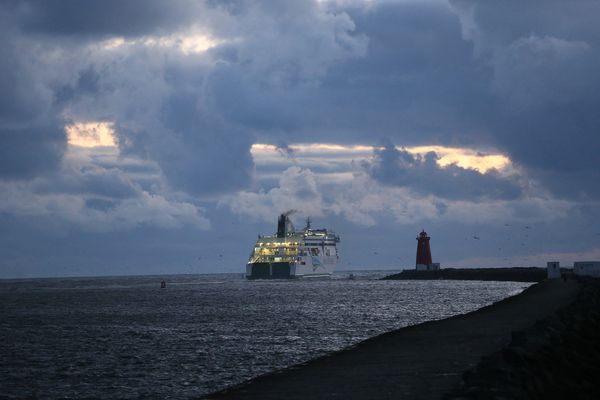 BORDER-BOUND: An Irish Ferries cargo ship sets out to cross the Irish Sea

How is Project Union going? Let’s begin with events on the eastern side of the Irish sea border which are mainly to do with preventing Scottish independence.

The Minister for the Union decided to visit Scotland on 28 January even though Nicola Sturgeon said the visit wasn’t essential – under Covid restrictions, crossing the English/Scottish border is for essential trips only.

She reminded him that leaders should follow the same rules as others but, as John Crace suggested, she was secretly pleased as, "every time Boris comes to Scotland, the poll ratings of the Scottish National party go up a few points". Johnson’s main message was that, "the great benefits of co-operation across the whole of the UK have never been clearer than since the beginning of this pandemic".

In a nutshell, supporters of the union are being mobilised to bring down part of the Brexit agreement that they themselves helped to engineer. In Nick Cohen’s words, "The DUP’s stupidity is truly bottomless because no Irish republican war forced them to embrace Brexit and partition the union … Rather, they egged Tory England on as it went berserk."

This was dangerous ground given the death toll and, apparently, dangerous ground literally as he set foot in Scotland only briefly – just long enough to say another referendum on Scottish independence wasn’t on the cards because the people had had enough of "pointless constitutional wrangling".  So it was pointless for Scotland to pursue independence from the UK union but entirely purposeful for English nationalists to obsess over claiming ‘sovereignty’ from the EU for years on end.

The trip north had obviously gone so well that, the very next day, the head of Downing Street’s Union Unit was sacked following a "furious dispute" (Financial Times).

Luke Graham was "the only person in Downing Street who gets Scotland", so he had to go. Oliver Lewis will now take over what is to be a "beefed-up union unit". Lewis, who counts Dominic Cummings as "a close friend", was head of research for Vote Leave and played a key role in the Brexit trade negotiations as number two to Lord Frost. He is also "not known for any particular expertise in Scottish politics". What a perfect CV for the job! Apparently Oliver’s redeeming feature is that "he knows it’s about passion, identity and about promoting the idea that you can be proud to be Scottish and British."

Lewis inherits a portfolio that includes a report on improving the functioning of the union by Baron Dunlop who was the Under-Secretary of State for Scotland and Northern Ireland for two years up to June 2017 (who knew?). This was completed in November 2019 but never published. It is possible that the report includes the union-boosting idea of transplanting Sophie, Countess of Wessex, and her husband, Prince Edward, from their permanent home in Surrey to Holyrood Palace in Edinburgh, a ‘leak’ that appeared in the Mail last week.

The Minister for the Union seems to be taking Scotland seriously, but it is less clear what his government will do for the cause of Irish unionism.

But there was some good news for the DUP.

A prominent academic came out in support of replacing the Irish sea border with a land border across the island, "though checks need not actually take place on the border". No, this is not an article from 2017. Known for his work on constitutional issues, Vernon Bogdanor writes in the Daily Telegraph (5 February) that the land border is the fairest option because the "citizens of Northern Ireland as British taxpayers" are, as a result of the protocol, "now deprived of their equal citizenship".

He seems to be oblivious of the fact that EU negotiators considered proposals to this effect over several years, including the Legatum Institute’s fanciful plan for airships and drones, dismissing them all as impractical and politically unacceptable. He also echoes the now popular DUP refrain that the protocol, part of UK law, is "arguably" in breach of the 1800 Act of Union. Is someone preparing a legal challenge to the protocol on this basis? The Chair of the Northern Ireland Affairs Committee, Tory MP Simon Hoare, described this reference to the Act of Union as "bogus" – adding, "his proposal is undeliverable […] I know I’ve driven the border".

Riddle me this:
Where are all the 'Smart #Border' state-of-the-art-technical solutions for GB-NI movement?

If they think it could work for the Irish land border (with 280+ crossings), why don't they rush in to 'fix' the Irish sea/air border (with half a dozen main entry points)?

On the north-western side of the Irish sea border, we were also lurching back in time. From a reluctant and grumbling acceptance of the protocol, the leaders of unionism suddenly took a hard-right turn into a cul-de-sac, even though it was clearly signposted as a dead end. Whatever the triggers for this – among them the European Commission’s short-lived threat to introduce a land-based vaccine border, menacing graffiti (in place for eleven days prior to Minister Poots ordering the removal of border staff), a poll showing a decline in support for the DUP – they are less important than the reaction itself: the decision by the DUP to adopt a five-point plan to scrap the protocol agreed between the EU and the UK government only seven weeks ago.

The protocol has to go, but not before Article 16 (part of the protocol) is invoked. Meanwhile the DUP proposes no engagement with the Irish government on any protocol-related matters. In a nutshell, supporters of the union are being mobilised to bring down part of the Brexit agreement that they themselves helped to engineer. In Nick Cohen’s words, "The DUP’s stupidity is truly bottomless because no Irish republican war forced them to embrace Brexit and partition the union … Rather, they egged Tory England on as it went berserk."

I don’t think it is right to gloat over the diminished sense of British citizenship that has arisen since the border in the Irish sea was agreed. The problems with the protocol are a real source of grievance and may get worse as the adjustment period comes to an end. They arise partly from the lateness of the agreement and, importantly, from the lack of urgency on the British side in implementing the protocol. The details of this are well-covered in the latest instalment of the Brexit Republic podcast and include the point that British traders into the North lacked information and preparation because all the focus was on Dover/Calais and Gove’s infamous border controls for trucks entering Kent. EU officials have not been given access to British computerised customs systems, necessary to implement the trusted trader scheme, and the elaborate committee structure required by the protocol has yet to be fully established.

I’m afraid the learned Prof’s conclusion is based on academic theorising rather than real life and political imperatives. Ref to the Act of Union is bogus. His proposal is undeliverable: there is NO WAY a N/S border is policeable or enforceable. I know I’ve driven the border https://t.co/a3vv60T2ks

It is right, however, to criticise the almost hysterical and exaggerated talk of a ‘GB soil ban’ (News Letter front page 6 February), or absurd statements like, "British soil is no longer allowed on British soil" (Mail on Sunday). The Mail might like to examine ‘the Falkland islands’ Import Health Standard for Vehicles, Machinery and Mobile Homes’ because British soil is not permitted in Las Malvinas either.

That dirty diggers and farm equipment are not allowed onto the island of Ireland is, first and foremost, a pest and disease control measure. Pre-Brexit, any muddy equipment was routinely sent back across the Irish sea for cleaning as currently, "washing at Northern Ireland Ports is prohibited" (DAERA). Such attempts to control the importation of pests and diseases pre-date Partition and go back as far as 1877.

IF WORST COMES TO WORST

The potato cyst nematode – aka the potato eel worm – is a particular enemy. One shovel full of soil, British or otherwise, can contain up to a million nematodes and eel worm eggs can lay dormant for up to 25 years (Teagasc). If the worst comes to the worst, you can always procure seed potatoes from Donegal or grow the new disease-resistant variety called ‘Buster’.

It has been clear for years that strict controls apply to imports from ‘third countries’. Britain chose to become one of these, aided and abetted by DUP MPs at Westminster. The EU warned last March of the need "to adapt distribution channels" to ensure treatment of wood packaging material (such as pallets) and of specific restrictions on plant health. One year before that (March 2019) revised import inspection fees became operative through Department of Finance/DAERA regulations which specifically refer to 100 per cent inspections of ‘third country’ imports. But such realities were not made clear to GB traders. Instead the Prime Minister and the Secretary of State NI engaged in denial.

The credibility of the union and unionists is unlikely to be reinforced by a campaign to undermine an international agreement so soon after it has been signed. Grievances over the protocol, exaggerated or not, are now being used as an excuse by Gove in his threatening letter to the EU demanding a further two-year delay in the implementation of the protocol. This is convenient cover for the incompetence and reluctance of Downing Street to honour the protocol. Look where brinkmanship over fishing ended up: in betrayal.